I am very worried about the apparent extinction of true wildlife experts in the North East. You know, the brawny fellows who brave the outdoors, keeping track of our wildlife? The guys who can recognize deer poop from bear scat.


I fear they have all gone into modeling, since the only place they show up anymore is on paper towels.


Instead, we are left with hypothetical wildlife experts, who keep insisting that NO MOUNTAIN LIONS
/COUGARS/PUMAS LIVES ANYWHERE ON THE NORTHEAST. So stop saying you see them. End of Discusion!


And no matter how many people report seeing them, these hypothetical experts remain in their cubicle, insisting people cannot tell the difference been coyotes, tabby cats, bobcats, and mountain lions. End of Discussion. Really!


Then one day in June 2011, a non-existent mountain lion was hit while crossing a Connecticut road by an all too real SUV. 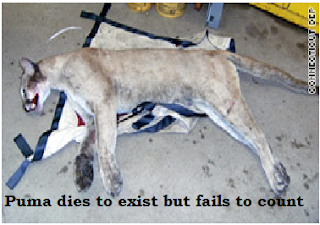 While clearly not a coyote or bobcat, our hypothetical experts refused to back down from their claim mountain lions do not exist on the east coast. So they declared it someone’s illegal pet.


However, its DNA claimed otherwise.


It turns out—this was evidently a shocker—mountain lions can cross state lines.


Perhaps our hypothetical Northeast experts thought a state line is actually a barrier of thorn bushes twenty feet tall and eight feet wide. Perhaps they have never left their cubicle and driven out of state.


I’m assuming they sit in their cubicle with a history book at hand that assures them all mountain lions were eradicated by the end of the 19th century.


In the 1800’s, the east coast became infested with humans, worse yet, humans with guns. This left the mountain lions only two choices: either die or head west (just like the bears did).


Now the situation has reversed. While most easterners have given up their guns, the west has acquired a great deal of them. With major gun ‘tote’ers now relocated into our ‘not many people want to live there’ states, the mountain lions have headed back this way.


And why not? We have all these lovely patches of woods full of rats, chipmunks, voles, moles, rabbits, squirrels, coyotes, feral cats, birds, snakes, ground hogs and deer. Lots of deer.


“No!” insists the experts. “There is nothing for them to eat here.”


Okay so what do normal mountain lions eat. Let’s look it up:  ah…they tend to eat deer and small animals, including rodents.
Deer. Well, we have about a trillion of them. My little town alone hunts and kills about 2,000 deer a year with our CARS. It’s an expensive way to hunt deer, I grant you. Yet,  we do it all the same.


So let’s see. Fewer gun tote’ers, nice patches of woods, filled with deer… It’s no surprise that all across the Northeast people are insisting mountain lions are wandering about.


Just to throw in my two cents. We have at least two mountain lions here in Denville, NJ. Neither of which my dog wants anything to do with. He’ll bark and insult our timid-bred bears, but not a mountain lion. When my dog scents a mountain lion, she aborts the walk and pulls me back to safety. No barking, no giving in. I must return to our car. Now!


I’ve no picture of our mountain lions, but one is larger and one is smaller…perhaps her cub, grown into a teenager.


They like to dumpster dive by the old Peer Locke. And kill deer in Nature Park. (It turns out when non-existent mountain lions kill a deer, the deer actually dies and gets eviscerated.)


Also given the teenage cub, I’m assuming there is a male somewhere about.


The true experts must have followed the cats and bears to the Montana/Dakota area, while the cubicle sitters remained behind typing reports that influences policy and laws.


Three months before the SUV killed the imaginary puma, the Northeast Fish and Wildlife service recommended the mountain lion be removed from our protected animals since it no longer exists.


And oddly, the physical evidence that indicated that mountain lions may have actually returned and set up camp in our lovely protected woods, has not swayed their stance.


Curious as to why they are working so hard to be incompetent, I went to our Hypothetical expert’s site: http://www.fws.gov/northeast/ecougar/QA.html


And got their statement.


Between 1900 and 2010 they have 108 cases that provided sufficient evidence to claim the pumas probably did actually exist (annoying dead bodies.) but concluded ALL were released pets or illegal immigrants from the western states. None were born here in the Northeast, thus per the immigration codes of Pumas, they don’t count.


And neither does my Denville mountain lion cub, while clearly born in Denville, since he probably came from an immigrant mother and father.


Thus, even if a mountain lion was born here, it doesn’t exist. So stop reporting its whereabouts.


Even more devious, according to our hypothetical experts, the mountain lion will be declared extinct unless they find three populations of 50 breeding adults.


I’m pretty sure before we got anywhere near fifty mountain lions breeding an additonal fifty cubs a year, my little town would be actively getting rid of mountain lions. And I would be right behind them. Well…way behind them, since Jess wants nothing to do with mountain lions. Honestly, I’ll be hiding in my house waiting for them to whittle the population back down to three.


Nor can I imagine any town in the Northeast willing to tolerate a community of fifty breeding mountains lions and all their cubs. We have small patches of woods, in the thousands of acres. We aren’t Montana.


Thus, I must presume this excessively high criteria is to ensure the mountain lion, under their criteria, cannot nor never will exist in the Northeast again. (All actual mountain lions being labeled coyotes, illegal immigrants, or pets.)


By doing so, the mountain lion will lose its protection in the Northeast so each state can decide how many of these non-existent creatures they can tolerate.


And that, may not be a bad idea. While I don’t mind two mountain lions scaring my dog and ruining our walks on rare occasion, I won’t be taking walks if there is a mountain lion posted every fifteen feet on my trail.


I would much prefer smaller communities of mountain lions, widely dispersed, and arranged marriages to prevent inbreeding.


Maybe our hypothetical, seemingly stupid, wildlife experts aren’t dumb after all, but politically clever. If they can ignore all the immigrant pumas wandering about and declare native born mountain lions extinct, the animal will be removed from the protection list, thus allowing a sane management program to be installed, rather than a ‘no kill ever’ policy that protects them now.
Or will it? What do you think?
Posted by Liza O'Connor at 7:37 PM