Cass here with great footage of a huge bear at Tourne Park. 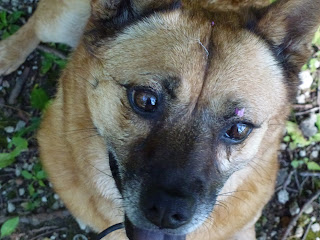 I feared I'd soon have great footage of a giant bear killing my dog, but thankfully my theories about NJ bears being the wimps of beardom held true.


The 600 pound bear wanted nothing to with my fox on steroids. Which is good, because Jess was intent upon tying him up with her leash.


Yes, my fear was by the time I got to her, there would be a tangled ball of leash containing one giant bear and one tiny dog. Other than video-taping the debacle, I’m not sure what Jess thought I’d do when I arrived.


I wouldn’t call the police. They’d want to shoot the bear, (and probably hit Jess in the process). And let's be fair, the aggressor was Jess, not the bear. The bear doesn’t have an aggressive bone in its body. This is the second time Jess has encountered the fellow, and I’m sorry to say, Jess behaved badly the last time as well. Only on our first encounter, I didn’t have a camera, so I held tight to tiny Rambo as she mouthed off to the bear 30 yards away while I etched the beautiful bear into my brain.
I had feared some hunter had killed the might fellow when last year, Gov’nor Pudgy opened up our NJ woods to lunatics with guns for a week of what I called 'terror hiking' and men with guns called 'Bear Hunting Season'.


So I was happy to see the handsome fellow looking rather like Gov’nor Pudgy (plump) but I was not happy seeing my dog tearing after him. I always suspected her bravado with bears was all show, knowing I would hold firm to the leash. However, today, I was trying to video, so I held her leash handle between my knees.


When she hit the end of her leash, my knees gave up her leash handle in a second. What shocked me as I continued to video is what she did next. There was not bravado. She was on a suicide mission. The bear tried to hide behind some trees and Jess runs at his face.


At this point I say something like “oh God…I’m going to video Jessie’s death. That is a big F….n bear.”  Thus I had to kill the sound in that part of the video.


Then the bear rushed from it hiding place  right at Jess. I thought she was a goner, but he passed to her right and hurries off.  I lose sight of Jess, but I spot the bear and decide he’s more interesting. (I’m thinking Jess is wrapped around a tree somewhere, and I can find her later. However, I have a chance to get a good shot of this fabulously large beautiful furry male.)


I can hear you yelling at me for being a bad dog owner. I was quite certain Jess was fine. She would have yelped if the bear had killed her.
So I go after the bear, getting some good shots of him, despite the fog. When I lose sight of him in the trees, I head back to look for Jess. And out she comes, feisty and looking for the bear, which sadly has come out of the forest. So off she goes again, with me yelling after her. The bear hurries back into the woods. And Jess follows.


I do not move as fast as dogs and bears, but I trail behind them. Not too thrilled with this whole ‘let’s chase the giant bear’ thing we have going on. The terrain is dangerous, so I have to watch my feet when moving, which means if the bear loops around, I won’t see him until his feet are in my ground-focused vision.


I stop on occasion to try to find the bear and lunatic dog. Through the trees, I can see the huge bear leaving the woods and crossing the road to the other side. When Jess doesn’t follow, I figure she is tied up somewhere between my location and where the bear exited the woods. So I attempt to trek a straight line to that point.


Ha! Drunken sailors have straighter treks. Now I know why the wild animals prefer to use the trails. The dead limbs from last year’s early snow storm, the rocks hidden beneath the leaves, and the tangles of thorny barberry bushes make moving through this area nearly impossible.
Finally, I came upon Jess contained by her leash, which is wrapped around two small trees three times. While she had barked once up to this point, now that I’ve arrived, she pulls at her leash and barks angrily at the departing bear.


Took me three minutes to untangle her leash and get out of the woods and make our way back to the trail entrance, all the while, Jess is pulling to go in the direction of the bear.


She could not forget that bear. Every time during our hike that we came to a junction, she wanted to go on whichever path aimed the closest to North.


People always say dogs don’t remember beyond a moment. However, she remembered that bear for two hours.


And for ONCE, I have video!
Part 2 has some very pretty views.