Hello, my peep! I know you just got around to putting up your Christmas stuff, but I haven't.

Yep, the reindeer are still in my window.
So I invited Nikki to talk about her novel,

The Secret of Santa Wishing Well.

Peta rep: Don't try to distract us with a great book. What's this about you dressing deer in clothes?
Liza: Don't worry, they are stuffed reindeer.
Peta rep: that's even more disturbing.
Liza: My sister made them from fabric and stuffing, so don't you dare send protesters to my house. 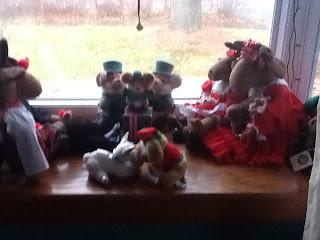 Besides, we are here to talk about a very fine book.
And to reward Nikki for showing up on short notice, I'm going to try to be good.

Peta Rep: Excuse me, but is the fur on your book cover real?

Nikki: Glad to be here, Liza, and no, Peta Rep, no animal was harmed or even inconvenienced by the making of my book cover.

Liza: Don't talk to Peta reps. It just encourages them.

Nikki: But you talked to them.

Liza: Which is how I know it just encourages them.

Nikki: Fine, what would you like to talk about?

Liza: Well, the weather's been done to death, I don't know maybe you can tell us about your book. Oh, look. I have your blurb.

The magic of Christmas has been lost to Jacob Winston. At the suggestion of his ill sister, Jacob takes a job as a Secret Santa at the mall, hoping to restore his Christmas spirit. Even that doesn't seem to work, until a special little boy ambles up to make a very special wish...

Cheyenne Jensen is struggling to raise her two kids without the help of her ex-husband who refuses to acknowledge his daughter's existence and doesn't provide for the son he does. This Christmas is shaping up to be as heartbreaking as the last, until her son Ben's kind actions lead a stranger to them.
Ah, but it's Christmas time and the magic has begun.

When Jacob and Cheyenne meet, neither can deny their immediate attraction to one another. As situations arise that require they spend more time together, their feelings grow stronger and stronger.

With Christmas fast approaching, the pair learn what matters most in life. Now, if only they could ditch the ghost of Christmases past.

Maybe this holiday will bring some wishes come true- for everyone after all.

Liza: So let's see, your story has a very horrible ex, a grumpy guy in a Santa suit, a worn out mother, an ignored little girl, a precocious boy, and ghosts.

Nikki: Ghosts? There's no ghosts.
Liza: You clearly referred to the Ghosts of Christmases past.

Nikki: That's an expression.
Liza: * mutters* Sounds like a ghost to me.

Nikki: I thought you planned to be nice.

Liza: This is nice...for me. Everything is relative you know.

Nikki: Don't make me regret this.

Liza: What is your favorite part of writing?

Nikki: The creativity! I love it when a story flows, and then a new idea forms, and I can just run with it.  To be able to tell a story, I just love the process of thinking up a story and then falling in love with the characters.

Liza: What part of your book was the hardest to write?

Nikki: The love scene. Still always my most difficult scene.

Liza: I use barbie dolls to make sure my moves are possible.

Nikki: Aren't the dolls a little...stiff.

Liza: No, Ken's been seriously neutered.

Nikki: No I meant the arms and legs. They don't move at all the joints.

Liza: Oh, mine do. They're imaginary.

Nikki: Why don't you just use your characters then?

Liza: Because Ken and Barb are professionals. They've been brought out for thousands of stories to verify viability. My characters aren't always terribly experienced.
Nikki: Can we get back to your questions?

Liza: Sure. Is there anything you don’t like about being a writer?

Nikki: Other than the fact that my characters are worse than siblings and fight for my attention? No. I don't think there's anything I don't like about it...

Liza: How does your family feel about your writing and you being an author?

Nikki: My family is very, very supportive! My parents used to buy me notebooks and pens as a child and teenager so that I could write my stories. My dad has read my completed books and there's even one that will never see the light of day unless I completely re-write it, but he swears he loved that book. He also read The Secret Santa Wishing Well and can't stop raving about it.  My husband is fully supportive, as he's my editor, formatter, and so much more. I love having the support from everyone.

Liza:*sighs* Who's your favorite character in the book?

Nikki: Ben. That little boy stole my heart and stole the story. If it weren't for him and his wish, Jacob and Cheyenne never would have met.
If your main character had been allowed to write the novel rather than you, would the story have been different?

Nikki: Nope. In The Secret Santa Wishing Well, my characters COMPLETELY took over and it turned out just fine! Will I always let characters run with the story? Hmm....probably not, but in this instance, it worked out perfect!

Liza: I wanted little Ben. Any chance you can give us a little Ben moment?

Nikki:  Okay, since you asked nicely.

A pull on his Santa suit drew his attention. He looked down, right into the round face of a child with wide blue eyes.

“ Hello there. Where’s your mommy, bud?”Jacob asked, speaking softly to the boy, who looked a little confused and frightened. But his eyes  were also full of wonder as he stared up at Jacob.

“Are you the real Santa?” He finally asked.

Jacob let out a hearty laugh. “No, I am just a helper. But I do know Santa. I bet, if you tell me your name, then make a wish in Santa’s secret wishing well, Santa will do everything in his power to make it come true. The boy’s eyes widened even more, and it brought a smile to Jacob’s face.

“Really? I can make a wish?” Dimples sprouted in the boy’s cheeks, his smile grew.

Jacob longed for the excitement the boy felt.

“I think we can arrange that.” Jacob reached into his pocket and pulled out a shiny penny. He pegged the kid for one who liked cars or trucks. Maybe a bike.
The boy reached for the penny, hesitant. He didn’t look much older than five. Where the hell were his parents? Who in their right mind would allow a child this age to roam around the mall freely, especially when there were so many people out and about. If someone didn’t show up soon, he could have to take him to security and have them find his parents.

Are you ready to make that wish? What’s your name? We want to make sure Santa knows exactly who you are. That way he can get your wish.”  Jacob asked, after the boy took the penny and clutched it in his hand.

“ My name is Ben.”   He nodded eagerly, closed his eyes and thought for a moment before tossing the penny in. it made a tiny splash before settling at the bottom next to some quarters. He turned to Jacob, a tear running down his cheek.

What was this? Jacob knelt down to be eye level with him.“Why the tear, bud?”

Ben sniffled. “I just hope my wish comes true.  My mommy needs it.”  He swiped the tear away, then stuffed his hand in his pants pocket.   A puppy dog expression crossed his face.

“ You made a wish for your mommy?” Okay, that’s not what he expected.  No expensive toy, not even a computer or Play station game that was popular this year? Jacob closed his eyes for a second.  My mommy needs it

Damn. His heart went out to Ben as a picture of Ada’s kids filled his mind. He didn’t have to wonder what their Christmas wish would be. Despite himself, Jacob had to ask. “What does your mommy need?”

The little guy shook his head. “If I tell it won’t come true. Will it?” Tears filled his eyes. “Mister Helper, if I come back and wish again, would that help?”

Jacob didn’t know what to say. He stared at the child, wanting to give him a hug. “Well, I don’t see how another wish could hurt. So, yeah, it might help. Sometimes the hope from wishing is all we have.” Hell, he scratched under his fake beard. He didn’t know if he was trying to console the kid or himself.

The boy’s brows furrowed , his head bobbed up and down. “That’s what I thought. Mommy’s always so tired and my daddy doesn’t love -”

Nikki: There's hope for you yet, Liza.
I just want to say, thank you for having me here today! It's great to come out every once in awhile and hang out. The writing cave gets dark and lonely sometimes!

Liza: Well, I had fun myself. Next time you come to visit bring little Ben with you.

If you guys don't want to wait for Ben to come here, then buy the book.

AND FOLLOW ME. I'M TIRED OF  46 FOLLOWERS. CHRISTMAS HAS BEEN EXTENDED. I WANT MORE FOLLOWERS.
pretty please?
Posted by Liza O'Connor at 1:00 AM