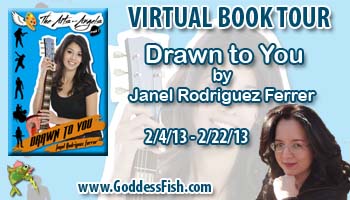 Hola Peeps,
Today we have Janel Rodriguez Ferrer with us to discuss her book Drawn to You.

Janel will be awarding one lucky tour winner the choice of a $25 gift card to iTunes(music) or, Capezio (dance), or Utrecht (art supplies) to a randomly drawn commentor during the tour.

So if you have an artistic desire that could use a little financial support, leave a comment and your email so Janel can find you.  Later on, I'll give you a link so you can locate the other tour blog sites to increase your chances of winning this fab prize.

Liza: Janel, can you tell us what event occurred in your life that influenced this novel?

Janel: Attending a high school of the arts in NYC totally influenced my writing a book about a girl who goes to a school of the arts in NYC! Although, yeah, I never put together a rock band made up of fellow students who majored in different art fields. I mostly hung out with other artists. I wish I had mingled more with the actors, dancers, singers, and musicians who also went to my school!

Janel: For now, my favorite character is Gina Santiago, who is the main character of Drawn to You. The book is written from her point of view and she's definitely the person you get to know the most about and whom I have the most in common with. She also has traits that I wish I had, like her musical ability and her courageous drive. In Track 2, however, readers will get to know the other members of the band when they start to reveal secrets—particularly in a Breakfast Club-like scene that takes place at Sage's mother's photography studio.


Liza: How'd you come up with this story?

Janel: I've wanted to write a tween/teen girl series since I was a tween and reading series fiction myself! I was really into the Trixie Belden mystery series then and wanted to create something like it, but change things up, too. So I asked (or my muse asked) a lot of "what ifs." What if I wrote a series with a girl protagonist who hung out with her friends like Trixie did, but instead of living in the country, she lived in the city, like me? What if instead of solving mysteries, she made music? What if instead of belonging to a club, she belonged in a rock band? And what if I made sure to put in more ethnically diverse characters, reflecting my own true experiences growing up? And so on.

I think I made my story center around music because I was really, really into the Beatles when I was a tween and teen, loving their music as well as the whole mythology that came with them (their humble beginnings at the The Cavern Club, Stu Sutcliffe, Pete Best, the "Paul is dead" rumors, the murder of John Lennon, etc.).

Liza: Sounds fabulous, let's get right to it.

The Arts - Angels Track 1: Drawn to You
by Janel Rodriguez Ferrer

Gina Santiago is a thirteen-year-old "Nuyorican" with rock star dreams, so when she's accepted into the prestigious New York Academy of Arts and Talents for art instead of music, she's crushed. To make matters worse, the student body at the Upper East Side school is divided into "schollies" (students on scholarship, like her) and "dollies" (rich kids with "dollars"). But Gina discovers that there is one thing that brings schollies and dollies-and dancers, singers, actors, artists, and musicians-together: music! Maybe she can make her dreams come true after all....
~~~~~~~~~~~~~

“EeeeeeeEEEEEE!” A piercing scream cut through the crowd that had been forming in the halls, startling Michiko and me. We watched as a beautiful, pert-nosed girl with boy-short platinum hair and a tiny, designer summer dress ran towards two other girls with long, flowing, shampoo-commercial hair and cheerleader-short skirts.  The scream, it turned out, was a happy one, as all the girls had their arms thrown wide open and were grinning at one another.

It was a chorus, all of them screeching, “EeeeeeeEEEEEE!”

One of the long-haired girls (a brunette) said: “Ohmygaaaaaaa! You look sooooo fabulous with that cut!”

The golden long-haired one chimed in with: “HOT! Totally hot!    Oh, I am so totally going to chop off my hair!”

The short-haired girl gave her head a little shake. “Thanks!  I know, I know.  I got it while I was on the Riviera.”  She smiled as her two friends pawed at her hair.

The brunette pouted. “Me too. Oh la la!”

The shorthaired one held up a hand and commanded, “Okay, stop!  Now, tell me: did either of you see… him?”

Michiko clucked her tongue.  “Come on, Gina.  Let’s go.  It’s just a bunch of dollies.  If I watch anymore I’ll be sick.”

“Who are they talking about?”  I asked.

Michiko rolled her eyes. “Probably Craig.  Craig Hall.  He’s only in the eighth grade, too, but he's this guy even girls in the upper school are crazy about.”

“I guess he must be pretty good looking.”

She widened her eyes and nodded. “Oh yeah.”  She turned away from me, but not before I saw her blush.

Like her main character, Gina Santiago, Janel is a Nuyorican who attended  a Manhattan high school of the arts as an art major.

Unlike Gina, she isn’t very good at guitar and doesn’t have a rock band to call her own.

Her first hint of an idea for the Arts-Angels series began way back when she received a pendant of St. Michael the Archangel for her sixteenth birthday.

She lives with her twin sister, Jennifer (who got a pendant of St. Joan of Arc that same birthday but hasn’t written any books about it), in New York City.

LINKS TO PURCHASE THE BOOK:

Liza: Peeps, don't forget to comment for your chance for the artistic gift card. For more chances to win the prize, click on this link to follow Janel's entire tour.

Janel's Tour Link
Once you get to the Goddess Fish Blog site, page down several times to see Janel's tour schedule. As you'll note I'm near the end of the tour, so you don't have a lot of time to visit the other sites, but I'm sure if you really want that gift card, you'll find the time. Happy hunting peeps.

And feel free to follow me if you're new to my site.
Posted by Liza O'Connor at 1:00 AM