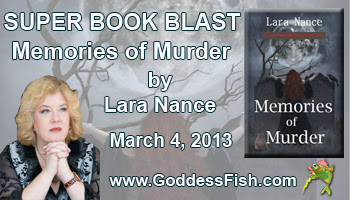 Hey Pirate Peeps! Look, we've got Lara Nance back! This time she's doing a blast for Memories of Murder.

And she's got Booty again.

Now focus! Lara's giving some lucky commenter a $50 Amazon Gift Card during this one day blast. So visit as many of the sites as you can.
(I'll give you the link to all the blog stops later.)

Also, someone at each stop will receive a signed Cover Flat.

Great stuff! So read carefully so you have something meaningful to say. Lara will appreciate that. 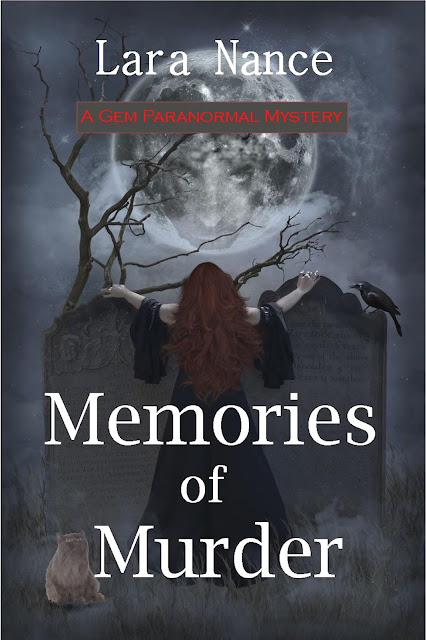 Memories of Murder
by Lara Nance

Memories of Murder by Lara Nance, a Paranormal Romance will be free from March 4 – 8th on Amazon Kindle.

When Maeve McKenna renounces her witch powers and accepts a low-key nurse practitioner position at a Virginia retirement community, the last thing she expects is a suicide her first day on the job.
As the town's sexy sheriff, Paul Sutton, starts looking into the tragic death of his father's friend, Maeve can't help but get involved--with both the case and him. Their informal investigation unveils an old journal that connects the ruins of a nearby asylum and long-forgotten cemetery with the shiny new retirement community's memory unit--and Maeve's Alzheimer's patients.
Maeve senses a sinister presence in the old asylum, calling to the patients, but in order to stop it from killing again, she must first conquer some demons of her own and reclaim the magic she's denied herself.
~~~~~~~~~~~~~


As if on cue, her cell phone rang and when she saw her mother’s number she sighed. Her Mom had been great during her crisis, but now had trouble letting go. Of course Maeve was grateful her mother and aunts had flown to Atlanta as soon as they’d heard about the attack. The Gems—the triumvirate of her mother, Opal, aunts Ruby and Pearl insisted Maeve return to Savannah to heal as soon as she could leave the hospital. There, the Gems helped restore her health with tenderness and a little magic.

Her mother and aunts had to stop worrying about her. She took a deep breath and forced a brightness into her voice she didn’t feel. “Hi, Mom.”

“Emerald, darling, how are you?” Her mother’s voice was a rich contralto tinged with concern.

Maeve cringed at her mother’s use of her first name. She chose to use her middle name after she bound her powers. However, her mother persisted in calling her Emerald or Em no matter how many times Maeve reminded her.

“Oh, I’m the same as ever,” her mother said with a deep chuckle. “Incorrigible.”

Maeve had to laugh. Yep, that was her mom.

Maeve sighed. “I just got here. But so far it’s very picturesque. The retirement community is obviously exclusive. You should see it. In a few months maybe you guys could come up for a weekend and sightsee.”

“You’re not telling me something. What happened to upset you?” Opal’s tone sharpened.

“Mom, stop it. You always say that when I talk to you from out of town. I’m perfectly fine,” she lied.

“Really, Maeve, Ruby saw a crow in her front yard this morning. A crow!”

“Big deal, a bird flew into her yard.”

“No, not just any bird. And then she went out back to work in the garden and found another one dead on the stone path. You can’t say that’s a coincidence.” She ended on a triumphant note.

“I know, I know. You don’t want to hear about omens. But mark my words Emerald Maeve McKenna, one day you will recognize the value of your heritage and be glad you have the powers.”

“Good. Now please give the rest of the Gems my love, tell them I miss them and take care. I’ll call you later in the week and let you know how the job is going.”

“I will. Take care and I hope whatever it is you’re not telling me is nothing really bad.”

She didn’t know whether to smile, grit her teeth, or both. Although her Gems had saved her, she also needed distance from her family for a while. It was important to find her own balance now that she had renounced her witch powers. She swallowed, regrouped her thoughts, and then headed into downtown Rolling Gap. She had to keep going. There was no other way to survive.

Lara Nance grew up and lived in many cities throughout the South. She loves to write in a variety of genres within the scope of women’s fiction. But the basis of all her stories is a tale that will entertain and intrigue.

If you want to escape and lose yourself in a novel, you’ve come to the right place. Choose your genre and settle in to be entertained. From thrilling mysteries and steampunk tales, to paranormal romance and adventure, Lara’s willing to explore a variety of compelling stories full of danger and suspense, with a touch of romance.

Having been on the fencing team in college and now living on a sailboat convinces her that she was a pirate in another life, or possibly kin to Errol Flynn… However, due to the unfortunate demise of the romantic pirates of the past, she lives out her fantasies, thrills and adventures in her stories.

Okay peeps, don't forget to leave a comment and your email for a chance at the booty.

Then after you comment here, click on the link below. When you reach the blog site, page down and you see all the blog stops for this blast. But do it today, this is a one day Blast.

CLICK HERE TO IMPROVE YOUR CHANCES FOR BOOTY.
but only after you've commented here