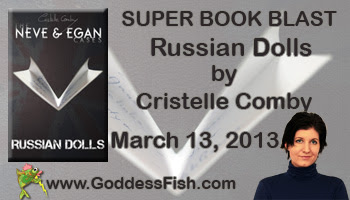 Dobro pozhalovatʹ peeps! (That's 'welcome' in Russian.)Today we have Cristelle Comby and her novel, Russian Dolls.

Cristelle will be giving away an autographed print copy of Russian Dolls to one lucky commenter during this tour.  And if you want to increase your chances of getting the autographed book, I'll give you a link later on for the other blog stops.

Okay, let's check out this book! 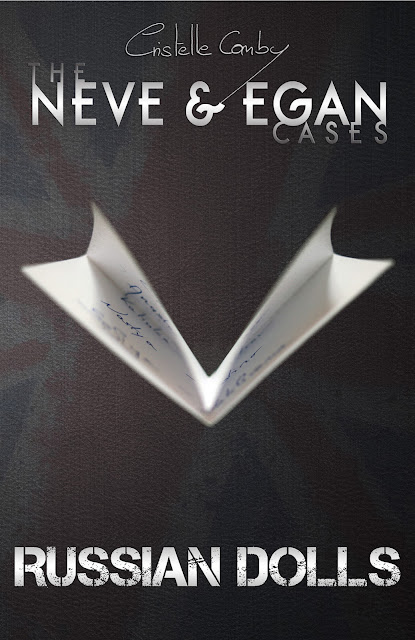 Alexandra Neve is a student at University College London whose world suddenly falls apart. When her best friend jumps from the university’s rooftop, she can’t stop herself from asking, ‘Why?’ The police rule her friend’s death a suicide and for them the case is closed — so whom can she turn to for help?

Sometimes the person you need the most is the one you least expect to find, and in this case it’s none other than Ashford Egan, a blind middle-aged history professor, who’s more willing than most to listen to what she has to say.

Neve and Egan are as different as they come. She’s restless, careless at times, and fearless when the need arises, while he’s almost the complete opposite: a deep thinker with an analytical mind, a highly rational and collected individual.

As they enter the violent world of the Russian mafia, they must overcome their differences and learn to work together. It’s their only chance if they want to survive.

You don’t think about them unless you’re forced to. You take the first for granted and try to forget the second.

You get on with your life, worry about meaningless things and you simply stop thinking about death, even though you see it every day on the telly, in the papers you read.

So long as it’s happening to others, you continue to go on with this comforting lie that says it’s never going to happen to you. The Reaper won’t come anywhere near you — until the day he does.
It could be a car crash, it could be a stroke. Or it could be your best friend jumping from the rooftop of the university you both attend. And suddenly you remember that death is very real and there’s no way of knowing who is going to be called next. You’re forced to face the frailty of life and accept your own mortality.

My best friend recently passed away and I almost died twice myself in the past couple of weeks. My name is Alexandra Neve. I’m a student who used to live in a reassuring bubble. It burst, and now I finally see the world for what it truly is.

Cristelle Comby was born and raised in the French-speaking area of , somewhere between and , where she still resides.

Thanks to her insatiable thirst for American and British action films and television dramas, her English is fluent.

She attributes to her origins her ever-peaceful nature and her undying love for chocolate. She has a passion for art, which also includes an interest in drawing and acting.

Russian Dolls is her first new-adult novel, and she’s hard at work on the next titles in the series.

Find out more at www.cristelle-comby.com

Sounds great, right?  Don't forget to comment for a chance at the autographed copy of Russian Dolls.

Link for More Chances
When you reach this blog, page down to find links