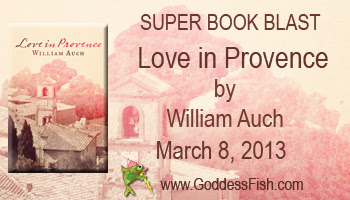 Helloooooo my peeps.  Today we are hosting William Auch and his book Love in Provence.

Will is offering a $25 Amazon gift card to one lucky commenter. All you have to do is leave a comment and your email so Will can contact you when you win. Spell out @ and . if you have a phobia of Spambots.

Also if you follow him about all his other stops, you can improve the chances of winning. I'll give you that link later, so let's get to it!

Peep Rep: I like your cover, Will.
Liza: Hush Peep Rep, this isn't an interview, it's a blast. You aren't allowed to talk in these.
Peep Rep: Opps! sorry.
Liza: You're still talking.

LOVE IN PROVENCE
By
William Auch

When John Martin is forced to sell his tech company, he decides to take a six-month vacation to the south of France.

When he meets Madame Garcin, her daughter Sophie, and her granddaughter Isabelle, his life is changed forever.   What began as a long vacation becomes a journey of self-discovery marked by love, loss, and tragedy.

He is molded by this family of three generations of women, tempered by tragedy themselves, in ways that he could never have imagined.

On the weekends, John would visit surrounding towns to explore. He visited Avignon and Gordes, as well as other cities in Provence. He always liked market day, when the farmers came into town with their produce to sell in the town plaza. The market became a sea of color with the various fruit and vegetables stacked neatly in rows as people from town gathered to select their food for the week. It was not only the fruit and vegetables that attracted him, but also the stores filled with cheese, pastries, and meat. It seemed like there was a specialist for everything.

Unfortunately, the bucolic nature of his current life continued to be interrupted by his weekly updates from his lawyer regarding the SEC investigation. He wondered if it would ever go away. His lawyer continued to fend off the SEC, but eventually he would probably need to return to California for questioning. His lawyer kept telling him not to worry, but that was easier said than done. The whole ordeal continued to weigh on him. Since his arrival in Aix a month before, the calls about the investigation seemed like the only news he had heard from home. Mike was probably too busy getting ready for the arrival of his new baby, Michelle was probably not speaking to him, and his parents didn't call. He assumed his father was mad at him for selling the company.

William Auch is a physician residing in Sacramento, California. When not seeing patients, he writes, studies French, and travels the world.

Here's the link to Will's other blog sites. Visit them today. The more you  visit and comment, the better chance for that $25 gift card from Amazon. Good luck!

Click the link below to Goddess Fish Blog site, page down and you'll find
List of Will's Blog Links
Posted by Liza O'Connor at 1:00 AM