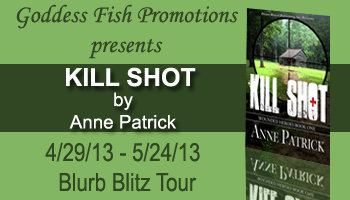 Hello Peeps! Today we have Anne Patrick and her dangerous book Kill Shot.

Peep Rep: Is she giving away guns?

Liza: No. Something much better: a $50 gift card from Amazon to be awarded to one commenter on the tour.

Liza: Then leave your email address in your comment.

Liza: Yes, we do.
So with no more ado, let's find out more about Kill Shot. 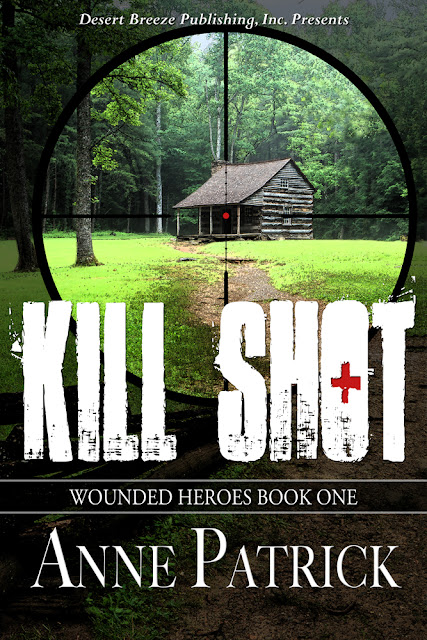 Former combat medic Kory Wagner survived four war zones. Now she’s home and out of the Army for good and someone is trying to kill her in her own backyard. Just as disturbing is the handsome sheriff who’s on the case. Sheriff Sean Harding doesn’t quite know what to think of the decorated veteran that managed to outsmart an entire search party. What bothers him more is the body of a PI, whom she hired, was found dead in a building she owns. And Kory isn’t being very cooperative with helping him find the answers as to why someone would kill her sister and want her dead. Will he be able to keep her alive along enough to discover the truth?

The intruder almost jumped straight up in the air. A figurine fell and shattered on the floor.

"Put your hands up and slowly turn around."

Sean lowered his gun in recognition of the intruder's voice. Kory Wagner. He should have known.

Kory's eyes widened when she saw him, her cheeks quickly turning crimson. "Are you following me?"

"No I'm not following you." He put his gun back in its holster. "You know I find it hard to believe you were in the army for twelve years because you sure don't take orders very well."

She lowered her hands to her hips. "You're not my superior. You have no right to tell me what I can and cannot do."

"You were a witness to a murder in my county. I have every right."

She seemed on the verge of a comeback when the landlord joined them. "Is everything okay in here? Oh Kory. I didn't realize you were back."

"Hi, Mr. Chandler. Yes, everything is fine. Super cop was just on his way out."

"I'm not going anywhere without you. And if you resist I have a nice pair of bracelets here to persuade you."

Mr. Chandler considered them both, before his eyes settled on Kory. "Before you leave, there is something I need to talk to you about."

Anne Patrick is the author of more than a dozen novels of Romance, Mayhem & Faith, including the award winning and bestselling WOUNDED HEROES SERIES, FIRE AND ASH, and TIES THAT BIND. Her books have garnered four-star reviews from Romantic Times, 'Top Pick' and 'Best Book' honors from Night Owl Reviews and Long and Short of It Reviews, and Five-Heart reviews from The Romance Studio. When she isn't working on her next novel she enjoys spending time with family and friends, and traveling to foreign countries to experience new cultures and adventures. Born and raised in Oklahoma, she now makes her home in Kansas.

Liza: Now peeps. Don't forget to leave a comment and YOUR EMAIL address if you want a chance for the $50 gift card.

Then click this link for Anne's other blog sites in this tour.

ANNE PATRICK'S TOUR SCHEDULE
Once you arrive at the Goddess Fish blog site, page down twice to find the tour schedule.
Posted by Liza O'Connor at 1:00 AM