Congrats to Jennifer Lowery for winning a free Betrothal ebook!

Peep Rep: The cover looks like it comes from a time long ago. How much time did they need to find love?

Liza: We'll check with Betrothal but I'm pretty sure the heroine found love within the span of the book.

Peep Rep: Then why are we just hearing about it?

Liza: Because writing historical novels requires the author to go back in time, discover how people live, and then write their story.

Liza: Enough of your silly questions. Jenna, catapult Betrothal on over. 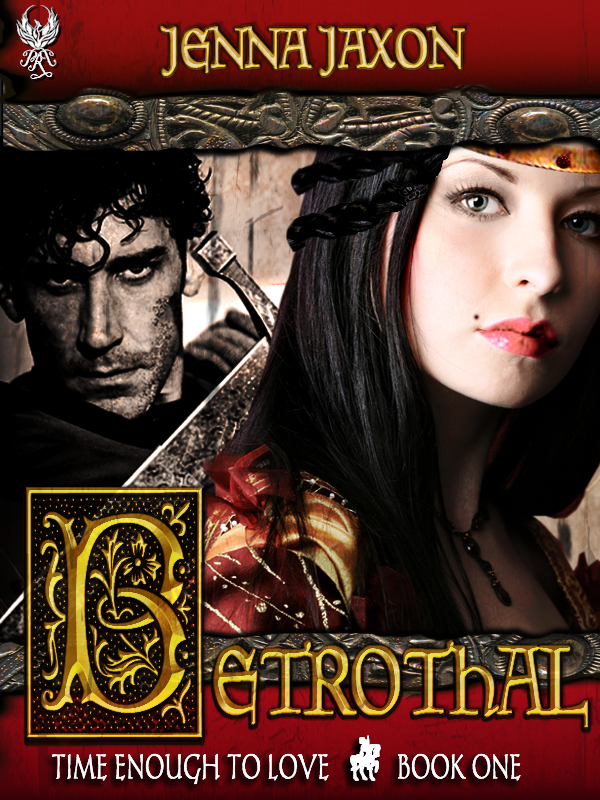 Book: Ouch! Would it have killed Jenna to send me early by FedEx perhaps?

Peep Rep: Are you kidding? Have you seen how they deliver boxes?
Book: Hold on! You can hear me?

Liza: Yes Beth...may I call you Beth, because honestly my fingers tangle on the word Bethrohal...see what I mean.

Peep Rep: I bet Bet bets on the horses. *laughs*

Bet: *snorts* I see thou has a court jester. King Edward would have offed his head if forced to endure such wretched humor.

Liza: I'll send him back with you if you'd like to test that theory.

Liza: Bet, allow me to thank you for getting rid of  Peep Rep. In response I shall endeavor to be gentle with my questions.

Liza: Please tell us about your story.

Bet: Lady Alyse de Courcy has fallen in love with Lord Braeton, a nobleman in King Edward III’s court and a man to whom she has barely spoken.

Liza: Hold on, how do you fall in love with a man you've barely spoken to?

Bet: Ladies of this time required little encouragement to think themselves in love.

Liza: I suppose that's still true with young girls. Millions declare they love Justine Bieber, and most of them have never spoken a single word to him.

Bet: So the fancies of the heart have not changed.

Liza: So she marries this guy she barely knows. How does that turn out?

Bet: Alas, Fate has decreed her betrothal to his best friend, Sir Geoffrey Longford—a handsome and imposing knight, yet hardly the man she wants to wed.

Liza: This is starting to sound like a soap opera.

Bet: Where do you think your soap operas came from, if not from the King's court. All sorts of mischief goes on in the castle.

Liza: That makes sense. So tell me more about this story.

Bet: When Sir Geoffrey is bound in betrothal by his father, he could not have expected the beautiful stranger to win his heart the moment they meet. Nevertheless, the fascinating Lady Alyse has done exactly that, and his feelings for her only grows as he learns more of her gentle yet spirited nature.

Liza: And what does Alyse think about her betrothed?

Bet: Ah, you can spell the word.

Liza: Took me three tries, but eventually I got it. Now don't make me put you on the rack. What does Alyse think about her Geoffrey?

Bet *sighs* Alas, Alyse’s infatuation with his friend casts doubt on whether she can ever return his regard and their wedding day is fast approaching…

Will he have time enough to win her love?

Liza: Why are you asking me. You're the book. You should know!

Bet: Of course I know. And you and the other kind readers may begin at the beginning and discover the answer for thyself.

Liza: What if I want to read the book starting from the back?

Bet: I will think you mad.

Liza: Some people do that you know. They read the first page, then flip to last page.

Bet: I do not believe you. You are simply stating such to upset me.

Liza: They only do that to other, lesser, books. I'm sure they would never do that to you.

Bet: I should hope not!

Liza: I did not mean to fluster your pages so.

Liza: If that is truly so, then might you let us peek beneath your cover and read a page or two?

Bet: I don't know...I suppose. But only if you promised never to read the last page until your arrive there properly.

Liza: You have my word.


“What do you require of me, Majesty?” Her mouth so dry she could taste sand, Alyse fought to speak in a normal tone. With a sigh of relief, she dropped into a deep curtsy, hiding her face in the folds of her skirt. If only she could remain bowed thus before His Majesty for the remainder of the evening.

Fearful, she cringed as her gaze climbed higher, over his chest, over his chin, finally resting on the dark blue eyes turned toward her.

Geoffrey returned her appraisal, his gaze sweeping her figure as a smile crept over his face. “Your Majesty.” He spoke to the king but his attention remained fixed on Alyse. “When my father told me of the betrothal contract before I left his home, I resolved to play the dutiful son. Now, however, I find I do not wish to act that role after all.” His eyes held hers as he paused.

Dear God, does he mean to renounce me here before the entire court?

Alyse stared at the man beside her, willing herself to remain upright, despite the waves of ice and fire alternating through her body.

“Now I find I would rather play the ardent lover.”

An amused murmur ran through the Hall at his words. Sir Geoffrey grinned, his eyes sparkling with humor and something more. Despite the uneven light, Alyse saw an unfathomable promise in their dark depths. She took a shaky breath and looked away.

Liza: It's even better than I expected. I cannot wait to read the entire book.

Liza: Absolutely. Thank you for being such a delightful book to interview.

Beg: I rather enjoyed it myself. Normally, my author is praised, but I am treated as nothing more than an object.

Liza: Then allow me to praise you.

Betrothed is a powerful book, well written, engaging with a straight spine, and not a dog-eared page to be found. His words flow easily from the book to your heart. You will treasure every moment you spend with this handsome, dare I say, beautiful book.

Liza: Which do you prefer, handsome or beautiful?

Bet: Me thinks you have captured it splendidly with both.

Liza: Now I know my peeps will want to buy this book. So here are thy buy links:

Liza: Can you tell us something about Jenna we don't already know?

Beg: What do you know?

Liza: That's she's a multi-published author of fabulous books, both in current and historical categories.

Bet: Did you you that Jenna has been reading and writing historical romance since she was a teenager.  A romantic herself, she has always loved a dark side to the genre, a twist, suspense, a surprise.  She tries to incorporate all of these elements into her own stories. She lives in Virginia with her family and a small menagerie of pets.

Liza: Nope. Didn't know any of that.

Bet: When not reading or writing, she indulges her passion for the theatre, working with local theatres as a director.  She often feels she is directing her characters on their own private stage.

Liza: Got any dirt? Does she have criminal record?

Bet: No, but she has equated her writing to an addiction to chocolate because once she starts she just can’t stop.

Liza: There you have it. Someone's a Coco fiend.

If you've enjoyed this interview, please follow me and leave a comment for me, Betrothal, or Jenna Jaxon. We love receiving comments. It's chocolate to our souls.

Bet: And I would like to give one of thou commenters a clone of myself, but only on the condition it be read in proper order. No peeking to the last page!


Now Bet after you've rested, I'll catapult you back to Jenna.

Bet: But you don't have a catapult.

Liza: Hang about until I build one. Anyone know a a site where I can get blueprints for a catapult?

Peep Rep: Here. I'll bet you a chocolate bar that you can't build this. http://youtu.be/Y0e2VzLW5fE

But it's going to take me three days. So peeps, you have no excuse not to leave a message.
Posted by Liza O'Connor at 1:00 AM