Peep Rep: Is that a dragon?

Liza: Trust me Peep Rep, you don't want to piss this boy off. He carries major weaponry.

Peep Rep: Oh! It's a truly lovely moniker. My favorite name ever. 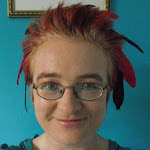 Pippa: Glad to be here.

Peep Rep: You have feathers...are you part bird?

Liza: Pippa, I've only one rule: No talking to Peep Rep.

Pippa: Then why do you let him ask me questions?

Liza: Let him? I have no control of Peep Rep. My followers elected him. They are entirely responsible for him. Now let's move on to your interview. What is your favorite part of writing?

Pippa: Creating new worlds and characters. Who wouldn't love that?! Not that I have any god-like delusions of power or anything... :P

Liza: Actually, I find creating characters removes all delusion of power. I plan for them to do XYZ and they blow me off and do LMOP and end with a W.

Pippa: Oh, I've had that too. But ultimately I get the final say in their fate. Bwah-ha-haaa!

Liza: Maybe I should develop an evil laugh like yours to scare them into submission. I'll work on that. In the meantime, is there anything you don’t like about being a writer?

Pippa: Some of the weird attitudes or reactions you get from people when you tell them you’re an author. Some think you must be incredibly rich and famous, then think you can't be a proper author if your book isn't on the shelves of their local bookshop. Or they don't realize how much work actually goes into a book, and that it's not a week's worth of tapping away at a computer, off to your publisher and out the following week, so when you say your book won't be out until up to a year later, they're confused.

Liza: Yeah, I used to wonder why authors took so long between books. I thought all the fame gave them writer's block

Pippa: My poor husband sees it as some kind of insanity that he hopes is temporary.

Liza: You probably shouldn't have said that.

Pippa Jay's husband has declared Pippa Temporarily Insane. He's searching for an asylum built like a spaceship to beam her up to.

Pippa: What was that?

Liza: Ignore those. They never get their facts right. You were saying...

Pippa: Fortunately, the more contracts and sales I get, the more he's been persuaded that this *is* a proper job, and not just some hobby I spend too much time on.

Liza: What do your kids think about your writing.

Pippa: My kids thought it was boring, until their teachers showed an interest - now they think it's cool, and eldest wants to be a writer too.

Liza: Well you have to admit watching someone write a novel is right up there with watching paint dry--unless you are the type who acts out the scenes as you write.


Liza: What's the best piece of advice anyone has ever offered you about writing?

Pippa: Get it writ. Worry about fixing the issues/typos/phrasing after the first draft is done.

Liza: Excellent 'showing'! Get it writ, indeed!
Now what part of your book took you most out of your comfort zone?

Pippa: Writing the technology. I love tech but I'm always worried I'll get the science wrong and someone will pick me up on it. It's been a long time since I did Physics at school.

Liza: Well, if you are basing your physics on what we believed ten years back, you have reason to fear. Honestly, they should only allow ebook physic texts, with daily downloads changing the 'facts'.

Liza O'Connor wants all students to fail Physics by testing them on constantly changing complex realities that they've never read because they didn't exist until 1 minute before the test.

Liza: See how I ignore the reports? What part of your book was the hardest to write?

Pippa: Killing one of the secondary characters.

Liza: Yeah, that's really hard. I did it once, then went into months of mourning, finally returning to my story and bringing my character back to life. I just couldn't go on without him. It turns out I loved the ugly mug.

So how'd you come up with this story?

Pippa: The main character had been in the back of my mind for years, ever since I'd decided my heroine from another set of stories would have a family. But it wasn't until I'd had my debut novel contracted that he really took shape in my head. I had a few ideas of what I wanted. There were going to be spaceships - SPACESHIPS!! - and more technology, and I based the earlier sections on my son, who was the same age as my young hero at the time. And a certain Tatooine farmboy had a lot of influence too.

Pippa:*reminds self that not everyone is a Star Wars fanatic* It’s a planet with a binary sun. Home to Luke Skywalker. *dreamy smile*

Liza: Describe both the heroine and hero and let us guess which is which:

The other is: Loyal. Guilt-ridden. Fiery. Altruistic. Wise.

Liza: Okay, Peeps. This is test to see if you really are reading my excessively long blogs. Which is which?  Here's my call: The first list matches me exactly, so I'm guessing that's me and the second one sounds like my dog, Jess.

Pippa: You really are as bad as I was warned.

Liza. Thanks. So who's your favorite character in the book?

Pippa: I love Jinx, my bounty hunter. She's small and sassy, and despite being one of the bad guys I can't really hate her. There's so much more to her than readers will see in this particular story.

How would you describe your relationship with your muse?

Pippa: Our relationship? Tempestuous! She's easily distracted, capricious, and as hard to pin down as catching dandelion fluff in a tornado. But I've found she dislikes housework even more than I do, so if she isn't playing ball, that's what I do.

Liza: Have you ever required intervention?


Pippa Jay has taken out a restraining order against her muse because she refused to do housework while Pippa played ball.

Liza: If you met an alien from outer space, how would  you explain what you  (as an author) actually do.

Pippa: Lol, if they're like the Thermians from Galaxy Quest, I guess I'd have to tell them I tell lies. But I hope they have a better translator than Google Translate or we could be in trouble!


Liza: Well, that concludes my interview. Let's get to your book.

Peep Rep: Glad I took back my dragon comment. So what's the book about?

Pippa: Abandoned by his mother after his father’s death, Gethyon Rees feels at odds with his world and longs to travel the stars. But discovering he has the power to do so leaves him scarred for life. Worse, it alerts the Siah-dhu—a dark entity that seeks his kind for their special abilities—to his existence, and sets a bounty hunter on his trail.

When those same alien powers lead Gethyon to commit a terrible act, they also aid his escape. Marooned on the sea-world of Ulto Marinos, Gethyon and his twin sister must work off their debt to the Seagrafter captain who rescued them while Gethyon puzzles over their transportation. How has he done this? And what more is he capable of?
Before he can learn any answers, the Wardens arrive to arrest him for his crime. Can his powers save him now? And where will he end up next?

Liza: Don't ask me. I have read the book yet.

Peep Rep: That's because  the blurb is for a book not yet released.

Liza: Oh...nevermind. Maybe we have an excerpt:

He couldn’t move. His feet seemed pinned to the floor, his muscles locked into rigid immobility. The Siah-dhu howled at him, their voice leeching all will and all power from him. Despite the sparks of power within him, the darkness writhed through his gut, gnawing with jagged teeth as it twisted though his mind. It was hunger magnified a thousand times, as if the vacuum of space had opened up inside him. He fell to his knees.

Gethyon. Not quite a voice, not quite any sound he had ever heard, the Siah-dhu called his name. The roiling mass drew closer. A chill gale blasted over him and snatched all the breath and warmth from him, sucking the life out of him.


“No.” The single word snatched him back from the edge. He hadn’t come so far or lost so much to surrender. As the Siah-dhu pulsed toward him intent on his consumption, he forced himself up again and turned his back on the shadows. It was the hardest thing he had ever done, to resist that pull into oblivion. The edges of the black cloud twined around him, incorporeal fingers striving to grasp him, seething forward to swallow him…


Peep Rep: Wow, that's a great excerpt! When is this book coming out?

Pippa: Thanks, Peep Rep! The 3rd June. *excited bounce* Oh, whoops, forgot I’m not meant to talk to you…

Liza: Pippa! You only had one rule to follow: Don't talk to Peep Rep.

Pippa: Sorry, it turns out harder than I thought.

Liza: Here's stalking, or should I say: staulking, links if you want to follow our fine feathered friend.


A stay-at-home mum of three who spent twelve years working as an Analytical Chemist in a Metals and Minerals laboratory, Pippa Jay bases her stories on a lifetime addiction to science-fiction books and films. Somewhere along the line a touch of romance crept into her work and refused to leave. Between torturing her characters, she spends the odd free moments trying to learn guitar, indulging in freestyle street dance and drinking high-caffeine coffee. Although happily settled in historical Colchester in the UK with her husband of 20 years, she continues to roam the rest of the Universe in her head. Her works have won a SFR Galaxy Award, and finaled in the Readers Favorite Award Contest and the Gulf Coast RWA Chapter Silken Sands Self-Published Star Award.

Liza: I love British authors, their voice has such a soothing accent. So leave a comment and maybe Pippa will respond with a British comment.
Posted by Liza O'Connor at 12:06 AM