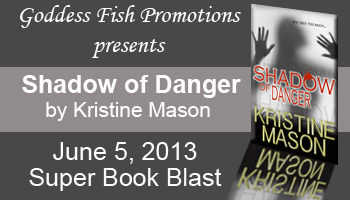 Welcome peeps. Today we have Kristine Mason and her book Shadow of Danger. Peep Rep, where are you?

Peep Rep: Hiding from the danger.

Liza: But your hiding in the shadows, which is evidently where the danger is lurking.

Liza: Because there are prizes to be had and I know how much you like that.

Peep Rep: What is it?

Liza: Kristine will be awarding four print copies of Pick Me (US only) and three $10 Amazon GCs to randomly drawn commenters during the tour.

Peep Rep: Yeah! And all I have to do is leave a meaningful comment and leave my email address?

Liza: That's all. And if you are good, I'll give you a link to Kristine's other sites at the end of this blog. 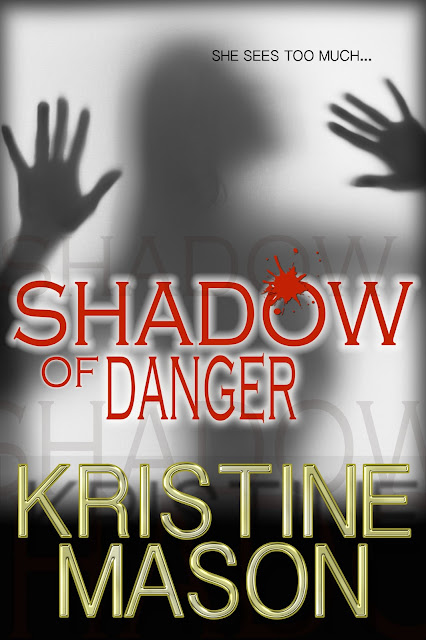 Shadow of Danger
by Kristine Mason

Four women have been found dead in the outskirts of a small Wisconsin town. The only witness, clairvoyant Celeste Risinski, observes these brutal murders through violent nightmares and hellish visions. The local sheriff, who believes in Celeste’s abilities and wants to rid their peaceful community of a killer, enlists the help on an old friend, Ian Scott, owner of a private criminal investigation agency, CORE. Because of Ian’s dark history with Celeste’s family, a history she knows nothing about, he sends his top criminalist, former FBI agent John Kain to investigate.

John doesn’t believe in Celeste’s mystic hocus-pocus, or in her visions of the murders. But just when he’s certain they’ve solved the crimes, with the use of science and evidence, more dead bodies are discovered. Could this somehow be the work of the same killer or were they dealing with a copycat? To catch a vicious murderer, the skeptical criminalist reluctantly turns to the sensual psychic for help. Yet with each step closer to finding the killer, John finds himself one step closer to losing his heart.

John Kain knelt, resting his forearm on his thigh as he studied one of the four victims. Bruises marred her flesh, her inner thighs, her face and chest, while her mouth gaped open as if she’d died screaming. The thin line of purple running around her neck was telling. She’d been strangled. Beaten, raped, then strangled. Just like the other three.

Roy, the sheriff who’d reminded him of Paul Bunyan, minus the ax and blue ox, came up beside him. “What are you thinking?”

John stood, then scanned the area, the dense woods, the highway where the deputies had set up a road block. The smooth asphalt was littered with police cruisers, several CSU vans, and maybe a half-dozen deputies. “I can’t be sure, but I spoke with...Mitchell?”

“Mitchell tentatively confirmed your suspicions, but will know more during the autopsies.”

“My exact thought. You’re in a heap of it.” And he’d just plowed through his own pile in Chicago, the stench still lingering, still fresh.

When he’d joined CORE, he’d known he would see just as much as he had when he’d been with the FBI, but Ian had promised downtime in between cases, something he’d never had with the Bureau. Something he needed now. What he’d witnessed while working with the Chicago PD and FBI Field Office would haunt him for a lifetime. And as pissed as he was about having a mini vacation dangled in front of him, then quickly pulled away with one simple phone call, he still had a job to do.

I didn’t pick up my first romance novel until I

was in my late twenties. Immediately hooked, I read a bazillion books before deciding to write one of my own. After the birth of my first son I needed something to keep my mind from turning to mush, and Sesame Street wasn’t cutting it. While that first book will never see the light of day, something good had come from writing it. I realized my passion, and had found a career that I love.

When I’m not writing contemporary romances and dark, romantic suspense novels (or reading them!) I’m chasing after my four kids and two neurotic dogs.


Liza: Don't forget to leave a comment and your email address. Here's the link to increase your chances of winning.

Kristine Mason's Other blog tour sites
Posted by Liza O'Connor at 1:00 AM