Liza Reviews The Temptation of Serena by Ella Quinn 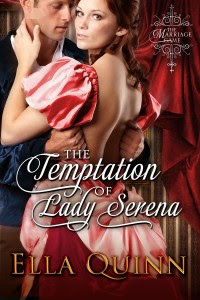 Today, I am reviewing The Temptation of Lady Serena by the fabulous Ella Quinn.

I was fortunate to receive an advanced copy of The Temptation of Serena, the third in the Marriage Game series.

As much as I loved the former two, this plot resonated deep within me.

Perhaps it was her bad boy leading man, Robert. He reminds me somewhat of my character Trent (from A Long Road to Love Series).

Autocratic, lack of consideration for others, selfish and self-centered. Although to be fair, Robert’s a far cry better than Trent.

And then there is Serena. How can you not love her? She’s been used as little more than a convenience, with no thought to her future or happiness by her closest relatives.  At the age of 14, when her mother dies, her father turns over the management of the house to her. And it’s a massive estate. Instead of calling in some female relative to assist, they yank Serena from her childhood and toss her into a job that would overwhelm most women.

Did Serena cry foul? No. She worked her hardest to do the job. And she did it magnificently.

When her father died, she had hoped her brother would return and take charge of the estate, but instead, managing the estate farms was added to her responsibilities. Never mind she should be having her year in London so she could find a husband and begin her life.

Her brother could have cashed out of his commission and returned home, but he chose to do what he wanted, never caring a wit about his sister growing long in the tooth.

When he finally returned with his bride to the estate, Serena became unemployed and unwanted. So the brother sends her to London for a season. No doubt at the encouragement of his wife, who could not gain ‘control’ of the house while Serena remained.

A 26 year old debutante. How humiliating for her. And why would any man want her?
She could not see all her positive attributes. She was beautiful both inside and out, experienced at running a large estate, (also both inside and out) and as Robert would discover, she possessed a passionate heart.

She fell in love with him almost at first sight.
Yet Robert had no interest in love. He wanted a marriage of convenience.

Yet the more Robert remained in her company, the more possessive of her he grew. He became determined to secure her as his wife, yet he refused to open his heart to love.

Or at least admit he loved her, because in my opinion and that of many of his relatives, he had already lost his heart to her, but he denied the truth, even to himself.

Stubbornly, Serena refuses his hand until he can say he loves her. She’d rather live alone than suffer unrequited love her entire life.

Unable to convince her to accept him even though he could not return her love, Robert attempts to force Serena’s hand by compromising her, thus stealing her right to choose and enter into a marriage of love.

Worse yet, when she refuses to be manipulated into marriage, he begins to channel his father telling her she has no choice in the matter.
How wrong he is.

It’s a Trent moment…or for a historical reference, a Darby moment…where our hero behaves badly, then later realizes what an ass he has become. And Ella Quinn delivers the unfolding flawlessly.

This is my favorite of the series so far. For me, this story had a strong Jane Austen/Pride & Prejudice feel to it. I found reading it a soothing and comforting way to end my day. Ella’s plot is fresh and delightful. I thoroughly enjoyed watching our very strong heroine take a hard blow, but stand firm and grow even stronger. Once united, these two become the strongest and my favorite of all the couples thus far.

And as always Ella introduces us into new couples who will no doubt show up in later books. I, for one, cannot wait.


To signify my preference over the prior 5 star books in Ella’s series, I give this one 5 GOLD stars. 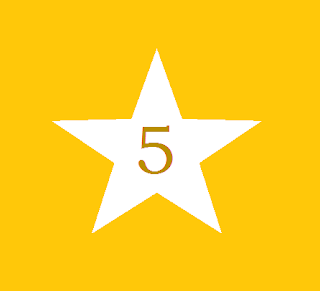