Today, we are interviewing the book Betrayal by Jenna Jaxon.

Liza: No we already interviewed Bet. Today we are going to interview Tray, who should be here by now. One of the many problems with the 14th century is they lacked wrist watches.

Liza: How do you think? by catapult. Oh here it comes now.

Liza: That had to hurt. You okay, Peep Rep? 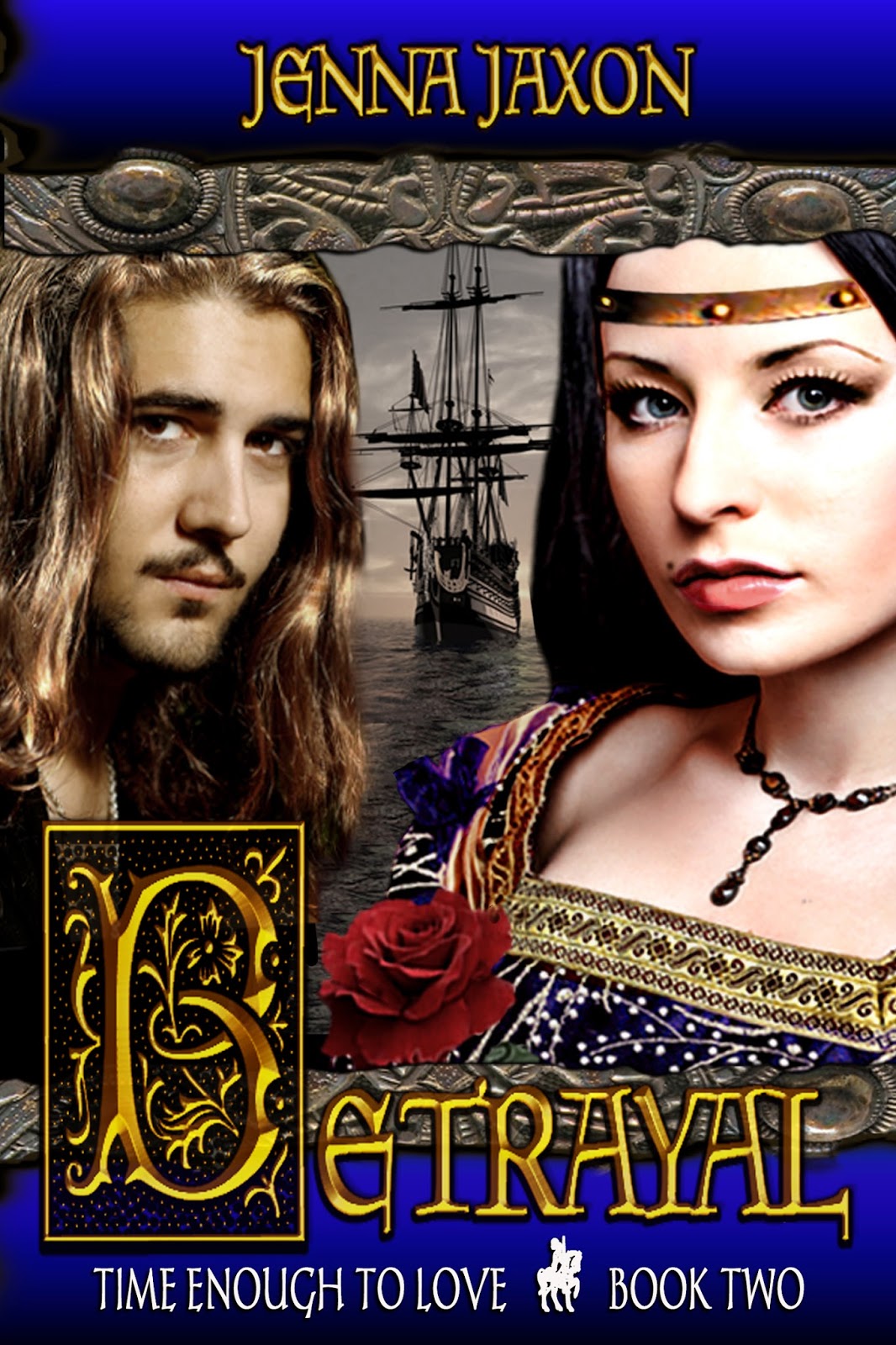 Liza: Welcome Betrayal. Mind if I call you Tray.

Tray: Call me whatever you want. I appreciate you sending your serf to catch me.

Liza: I didn't send him. He just happened to be standing in the right place at the right time.

Peep Rep: No it was the WRONG place and the wrong time and I'm not a serf!

Liza: Whatever. Tray is here and I'm most curious, and a bit worried what has happened. Your name is, to put it bluntly, worrisome.

Tray: *Nods with his cover* After a night of passion with her betrothed, Sir Geoffrey Longford, Lady Alyse de Courcy is eagerly looking forward to her wedding.

Liza: Then if I recall he gets sent away, but it was only to a short while.

Tray: Life nor Love is certain. Agreements change when circumstances change.  Geoffrey is forced to marry another.

Tray: What is wrong with your serf? Did he break inside while catching me?

Liza: No. We just wanted those two to wed. He's disappointed.

Tray: Good thing he lives in this era. Happiness and true love was a rarity in my time.

Liza: So back to Alyce. What happened to her?

Tray: Heartbroken and possibly pregnant, Alyse finds herself in her own private hell. She must either gamble with her reputation or marry someone she does not love.

Liza: Who would she marry?

Tray: Yes. While he has dallied with many ladies of King Edward’s court, he has favored none.

Liza: Why would he agreed to be tied down with Alyce?

Tray: As Geoffrey’s best friend, Thomas has sworn to serve and protect Alyse, an oath now sorely tested when he agrees to marry her—in name only—to guard her reputation.

Liza: So she is to have a loveless marriage after all?

Tray: Not as loveless as you might think. As they grow closer, and Thomas discovers Alyse’s sweet but spirited nature, he comes to desire a marriage in truth.  But...

Tray: He questions if he can overcome her memory of Geoffrey or if he'll be doomed to burn with passion for a woman he can never possess.

Peep Rep: Way to go Tray! You managed to avoid asking a question that Liza doesn't know the answer to. Give me a high cover five.

Tray: I've no idea what that means but you are scaring me.

Liza: Peep Rep step back. I want to read an excerpt but Tray isn't going to open his covers while you're swinging your hand about.

Liza: This story sounds as good as the first one.

Liza: Then open up and let me see.

With the sigh of a martyr at the stake, Alyse nodded and Anne leaped forth and stripped the linen shift from her. She fought the impulse to shield her breasts and womanhood; apparently brides were expected to be appraised as if a horse at market. The only stare that sent a shiver up her back, however, was Lady Carlyle’s. The woman’s lips twisted into a sneer as her gaze swept Alyse from head to toe. A look of triumph she did not understand lit the lady’s face and Alyse turned her back, quite willing to allow Anne to drop the silk chemise over her head.

When she turned back to the company, loud “ahs’ and whispers of “indecent” ran through the women. Alyse looked down at herself. As she feared, the sheer material revealed every swell of her breasts. As the fabric moved across them, her nipples hardened, poking the garment out to sharp points.

Maurya stepped behind her and began to brush her hair again. “Pay them no mind, Alyse,” she whispered. “You are more beautiful than any of them. And I warrant Lord Braeton will have no qualms about you whatsoever in that shift.”
Before Alyse could reply, the door burst open and the laughing, swearing, drinking chorus of male courtiers who attended Thomas strode in. And stopped. The sudden silence intensified the tension in the small room. Their eyes rested on Alyse, who stared back at them and prayed she would not faint again.

As suddenly as the silence descended it broke, and a babble of laughter, praise and ribald jests issued forth from the appreciative gentlemen. To her utter humiliation, Alyse recognized Patrick Sullivan, Roger Delaney, and Robert Spencer among the courtiers. All stared at her still, Patrick leaning over to comment to Sir Roger, who laughed and nodded in agreement.

She blinked back tears of rage, but stood quietly lest they make even more sport of her.
From the corner of her eye, she caught movement in the doorway, and several men and ladies moved to make way for the final actor in this terrible play.  Thomas strode grandly into the chamber, smiling as though he walked in a decorous procession. Attired in a splendid robe of green wool, adorned with velvet down the center edges and fur at collar and cuffs, he swept her a low bow. He laughed as he arose, but the sound died on his lips when at last he registered her figure in the blue chemise. The stunned look in his eyes was swiftly replaced by a hot hunger that made her gasp. Any hope she had of him honoring his promise died with that look.

“Lady Braeton.” He held out his hand, and Alyse had no choice but to take it. He raised it to his lips, searing her flesh with their warm touch. “You are a vision I scarce would credit this side of heaven.” She peered into his darkened eyes, seeking mercy. At the almost imperceptible nod of his head, she could breathe again.

He released her and stepped back. “The wedding is done.” Thomas nodded to his attendants, who stepped forward. “Let the bedding be done as well.” Stretching forth his arms, he waited as the men stripped the robe from him, revealing his perfectly nude body beneath.

Liza: Okay, this is one of those times where I long for the movie.  This sounds really good. Don't you agree Peep Rep.

Peep Rep: It does. We have to read this. Me first. Let me find the buy links. No buy links. It's not out yet. But here are other links:

And here's the first book which I loved.
Betrothal at Amazon:
Liza: Tray, would you like to distract Peep Rep from crying by telling him stories about Jenna.


Tray: I can do that. Jenna Jaxon is a multi-published author of historical  and contemporary romance.  She is currently  working to release Betrayal at the end of January and finishing revisions to her fifth full length novel, To Woo A Wicked Widow, set in Regency England and the first book in her five part series, The Widow’s Club.

Liza: No moss growing on her fingers.

Tray: I have no idea what that means.

Tray: Jenna has been reading and writing historical romance since she was a teenager.  A romantic herself, she has always loved a dark side to the genre, a twist, suspense, a surprise.  She tries to incorporate all of these elements into her own stories. She lives in Virginia with her family and a small menagerie of pets.  When not reading or writing, she indulges her passion for the theatre, working with local theatres as a director.  She often feels she is directing her characters on their own private stage.


She has equated her writing to an addiction to chocolate because once she starts she just can’t stop. 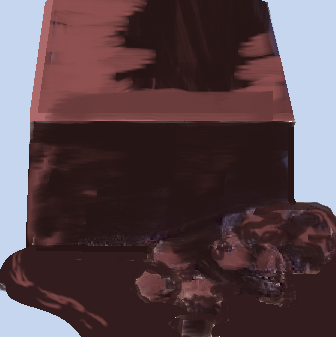 Liza: I've had fun interviewing you. Here's some chocolate for Jenna. Now let's put you back the catapult...

And readers, leave a comment. It's chocolate to our souls.