Allow me to set the stage:

He took the crown at 14 when his Dad got the boot by Grand Mama because Eddie II allowed everything to fall to hell in a hand basket.

Edward III was generally thought to be a good king until his later years. But to be honest, he runs havoc on the characters in Jenna Jaxon’s books. 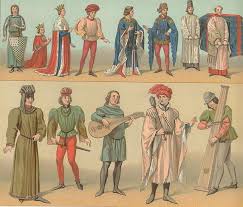 For those of you not intimately familiar with 1348 this is a time when men wore skirts to their knees and ladies wore  gowns to their toes. A time when 'jousting about' required armored horses and long poles. A time when the king held total sway over his people and could alter their lives in a second. And it's a time when life was uncertain and you lived in the moment, because tomorrow you could be dead.

It is also a time of easy betrayals for purse and power. Love held little value or purpose in life.

In Book 1, Alyse arrives at the King’s Court and falls at once for Lord Braeton, known as Thomas to his friends. To her disappointment, she is betrothed to another, Geoffrey Longford, the second son of highly respected family. Geoffrey is determined to make his beauty love him, despite her initial preference to Lord Braeton. With a few trials, he does succeed in winning her heart. At the end of book one, right before he returns to see to his dying brother, they make love and the book leaves you in fuzzy warm happiness or would if not for the name of Book 2:

That is a heavy omen if I ever saw one, I opened book two with trepidation...

Book 2 begins  with Alyse longing for the return of her betrothed, only he doesn’t. His brother dies, leaving him as #1 son. The King is petitioned to break Geoffrey’s betrothal to Alyse, so he can marry the young girl intended to marry Geoffrey’s brother. Not surprisingly the king agreed. The young lady was his niece. (This was arranged by his father and the king. Neither Geoffrey nor Alyse had say in the matter.)

The news devastates both Alyse & Geoffry, but Alyse has worries beyond a broken heart. What if their one time together has left her with child?

As Geoffrey’s best friend, Thomas steps up and marries Alyse to protect her. He has no expectations of love, and thus gives her a promise that they can live as brother and sister for as long as she wishes. Given his skill at seduction, he does not expect her to refuse him for longer than he can easily endure.

But then, he hadn’t seen her naked yet.

Soon, he longs not just for the body of his beautiful wife, but for her heart as well. Sadly, Alyse still pines for the man of her heart: Geoffrey.

Thomas begins a grand seduction of his wife that has fits, frustration, re-starts and near destruction along the way.

Which I will leave you to discover.

I loved Betrothal, so I expected to love Betrayal as well.

At least until I smacked face first into the back book cover and nearly broke my nose!

Leaving me most disgruntled.

My one and only complaint is that the book ended.

This could easily be resolved by my reading book 3, but it’s not out until spring.
Which leaves me uncertain of the future.

Nor do I obtain great comfort from the name of Book 3:

Getting beyond that complaint, there is nothing about these books not to love.

I channeled Edward III when writing this review. This is what he has to say"

Read in proper order the books
Betrothal and then Betrayal,
for I giveth each
my highest recommendation of
5 Grouts.