Sounds like an easy task, right.
Find some pictures on pininterest and slap them up.
Here's my problem. Lots of pictures are mislabel to their exact time. They are 1890s. But the decade was far from homogeneous.

During the coming of THE NEW WOMEN (1st named in 1894) they give themselves large puffy 'I am NOT fragile' shoulders. They keep these massive puffs from 1894-1896

In 1987 & 1988 they gave it up, tired of fighting with their coats in the winter, and returned to slender arms. The big difference between the early part of the decade is that the bustle has nearly disappeared this time around and the hats are huge and carry strange items like birds, fruits and dead foxes.

By 1899, the hints of the Edwardian style show up with the use of lace and draped softer fabrics.

However, most of the ladies continue to wear the more delineated line of 87/88.

There is also a difference between English, American, French and other countries. France, home of House of Worth, would make a dress for any nationality with the funds to buy it, so they sold widely diverse styles, not all which would be accepted in all countries. Thus, when someone moved to a new location, buying a new wardrobe was a top priority.

However, that doesn't mean all ladies wore the same style. We don't now, and we didn't then.
Here are some style sheets showing what was 'in fashion'  and what someone wore instead.

Here's a 1895 'Gibson Girl' style vs. a french style preferred by some.

So as you can see, one style does not suit all.

Nor does one dress a day work.
It was not uncommon for a woman to change her clothes many times in the day.

a day dress
This particular dress is called a 'Shirt Waist' because it mimics a man's shirt. (except for the sleeves.) It was the basic uniform for working young women of the growing middle class.

a walking dress,
no train to drag about in the muck.

an afternoon dress to visit others (with train to drag about in the muck.)

a tea gown  is likened to a morning gown made of luxurious fabrics. No corset is normally worn beneath it. Notice a strong resemblance between the afternoon and tea dress length of skirt trails. The main differences are the afternoon dress could be worn outside and required a corset, while the tea dress was for intimate indoor occasions only with people you don't mind seeing you without a corset. This means the host of the tea party might wear a tea gown while visitors might prefer arriving in an afternoon dress. Main source

a dinner dress, to my eye, looks a great deal like a 'day dress' but with more expensive fabrics.  Since a tea gown was not deemed appropriate for the dinner table, the corset must be located and a dinner dress put on for the evening meal.

and last, but not least, the ball gown.
Notice the train on the ball gown was not normally as long as the trains on the tea gowns. That may be because it was easier to dance in shorter trains.

I don't know about you, but to have the whole day wasted in changing clothes sounds like hell to me. And don't forget, ladies were advised to bath at least twice a day.

Of course if you wished to go swimming,


There were special clothes for each.


And let us not fail to mention the sad cries for attention, otherwise known as 'What was she thinking?"

(1894)
The need to compensate for small breasts 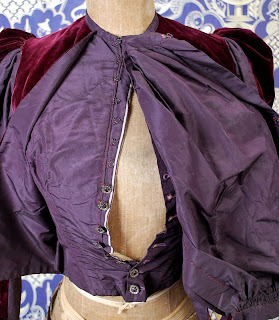 Can't take your eyes off my chest, can you?
Stare much longer and you'll have to marry me.

(1894)
The wonders of fabric folds to give the illusion of breasts.

(1896)
Faux cleavage
Assuming the wearer's skin was close to the color of the chest fabric, this ballgown would be most risque.

Thus ends my review of Late Victorian Era clothing for ladies.  Just reading about all these dresses to be worn in a single day exhausts me. I can't blame my character Vic (in my humorous,  Late Victorian  mystery romance series, Book 1 - August release) for deciding to live the life of a young man instead of a woman. 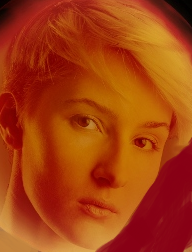 Vic makes a handsome young man, doesn't she?
Posted by Liza O'Connor at 12:00 AM