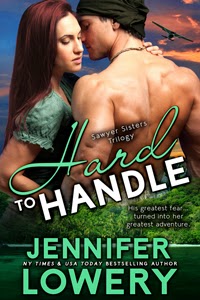 His greatest fear…turned into her greatest adventure.

Amelia Sawyer is looking for adventure outside her ordinary life. She hires bush pilot Brody Kern to fly her into the South American jungle, expecting a dashing, debonair version of Indiana Jones, but Amelia butts heads with the brooding, gruff man.

Brody Kern, former Air Force fighter pilot, doesn’t need another Sawyer determined to find the elusive Paraíso. People had been hurt or killed trying to find the mysterious place, including Amelia’s aunt, but Brody’s business partner has cleaned out their account and taken off with the money. Now Jeremy’s bookie is breathing down Brody’s neck, threatening to break his kneecaps, or worse, if he doesn’t pay his friend’s gambling debts.

As Brody and Amelia hunt down the treasure with every criminal in the area wanting a piece, will it be the adventure of a lifetime—or will it result in heartbreaking betrayal?

The door to the hangar flew open. Brody popped his head out. “We have to go. Right now. Move it.”

Not the words she wanted to hear, but his tone and the red welt on his cheek got her moving. Clutching her bags like a shield, she hurried toward the hangar, tripping only once in her rush to see what happened.

“What happened?” She stared at the crumpled body of Mr. Newton and another man she didn’t recognize on the floor.

Brody, who worked fast to throw a side panel on the plane, barked, “Get in the plane.”

“That plane?” Getting in the red and white piece of tin didn’t sound like a good idea. The plane looked even less reliable than his Land Rover. And wasn’t that an engine part lying on the floor beside his toolbox?

“She’ll run fine.” Brody ran around to the other side of the plane, obviously to finish his hasty repair and put his plane back together. “Now, get the hell in.”

“Nothing they didn’t invite.”

In other words, he wasn’t going to tell her.

“If you don’t get in this plane right now, then our friends there are going to wake up and they aren’t going to be happy. They want the map, Miss Sawyer, and I have no intention of giving it to them. Do you?”

Amelia shook her head, looking at the two men who were beginning to stir. “Okay, okay.” She hurried toward the plane. “You’re giving me answers to your change of heart as soon as we get out of here, Brody Kern.”

He opened the door for her, took her bags and tossed them in the back, then lifted her in the front seat before he slammed the door closed. Once he was in the seat next to her, he brought the plane to life. It choked and sputtered before gaining power.

Reaching over her shoulder, she put on a seatbelt as Brody maneuvered the plane out of the hangar and onto the runway, which was nothing more than a cleared path through the jungle. The plane bounced and shook as they gained speed. Nothing like the jet she flew in on. Nothing at all.

She’d loved the plane ride over. Loved flying the second she set foot on the jet. Maybe because it was the official start of her adventure, but either way, it was more fun than this. Safer, for sure. Brody’s plane sounded like a tank rattling down the road and it rode like one too. And she thought his Land Rover was bad. This felt like riding in a tin can with seats. Very close quarters. Every time they hit a bump, her shoulder hit Brody’s.

“Are we going fast enough?” Amelia asked, worried they would hit the end of the runway before they gained enough speed. “Do you know how to fly this thing?”
Brody didn’t answer, just concentrated on his task. He seemed confident enough with his hands on the oddly shaped steering wheel and his eyes watching the many dials. She had one of the funny shaped wheels on her side too, but she didn’t touch it. It moved with Brody’s so she let him have it.

Nerves pounding, heart pumping, Amelia held on for dear life as they barreled down the runway. Frightened and excited, she watched the runway get shorter. Her life was in Brody’s hands and somehow that exhilarated her. Trees rushed past, her heart raced.

They were almost at the end of the path. Trees loomed ahead, tall and unyielding, creating a barrier. Amelia gripped the seat in anticipation.

They weren’t going to make it. 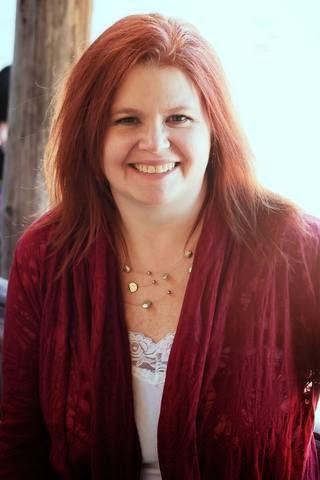 Lowery grew up reading romance novels in the back of her math book and on the bus to school, and never wanted to be anything but a writer.  Her summers were spent sitting at the kitchen table with her sisters spinning tales of romance and intrigue and always with a tall glass of ice tea at their side.

Today, Jennifer is living that dream and she couldn’t be happier to share her passion with her readers.  She loves everything there is about romance.  Her stories feature alpha heroes who meet their match with strong, independent heroines.  She believes that happily ever after is only the beginning of her stories. And the road to that happy ending is paved with action, adventure, and romance. As her characters find out when they face danger, overcome fears, and are forced to look deep within themselves to discover love.
Jennifer lives in Michigan with her husband and two children.  When she isn’t writing she enjoys reading and spending time with her family.