A Summer For Love Blog Hop: Liza O'Connor shares a man desperate to be loved.

Welcome to A Summer for Love Blog Hop.
We've got some
FABULOUS PRIZES
SIX $50 Amazon Gift Cards will be awarded to randomly drawn participants/commenters.

You MUST leave your name and email for your comment to qualify as an entry toward the grand prizes.


Be sure to comment on ALL blog stops to increase your chances of being drawn as a winner.

In addition, the special gift for this blog
is your choice of the following ebooks by Liza O'Connor:


All are highly rated
Ghost Lover -Humorous Contemporary Romance
Worst Week Ever - A humorous Romance Disaster of epic proportions
Oh Stupid Heart - Billionaire Trent & his petite but mighty executive assistant fall deeply in love despite they have nothing in common.
Coming to Reason - Trent inexplicably destroys his relationship with Carrie, leaving her no choice but to come to reason and find a better man to love. A very nice HEA for Carrie.

Just tell me which book you want when you leave your comment and email for the Grand Prize. I will give away 5 in total.

Now let me tell you about Trent and his recent transformation into a man worthy of love.

One Man's Desperate need to be Loved.

No one has ever loved Trent before he met and fell for his executive assistant, Carrie. Not even his parents.

At the end of book 2 he asks Carrie to marry him. She agrees, but wants a long engagement.

Then his life unravels. His ex-fiancee from many years prior claims she's pregnant with his child from a recent night she drugged him. Her mafia connected father threatens Trent that he'll go after Carry if Trent doesn't marry his daughter.

Trent has chased the she-devil off with bad behavior in the past, so he tries again. But this time Coco won't run. She wants his $42 billion. The only one who gets hurt by his actions is Carrie. She concludes he never loved her and moves on to a better guy.

His last attempt to win Carrie back ends with Trent tossed on a NYC sidewalk, devastated he has lost the only person who ever loved him.

A priest helps him up, takes him back to the parish and listens to the longest confession the poor fellow has ever heard. Trent wants an exorcism, but the priest assures him he has no demon, only a knack for making very bad choices in life. He advises Trent to give away his money and start again.

So Trent fakes his death, moves to Iowa with a new face and name (Trevor). And this time he channels Carrie rather than his god awful father when stressed. And by doing so, he becomes a fabulous guy who not only changes himself, but the entire town. I believe this pass it forward influence is why Climbing Out of Hell is considered the best of the series by some reviewers.

Trent's first love, Carrie, remains his compass as he rebuilds his life from scratch, grows up, and becomes the man that Carrie had always seen inside him. And while he has lost her forever, he meets a new woman, better suited in all ways, only there's one problem. She's his brothers girlfriend, and the new Trevor will not go there. 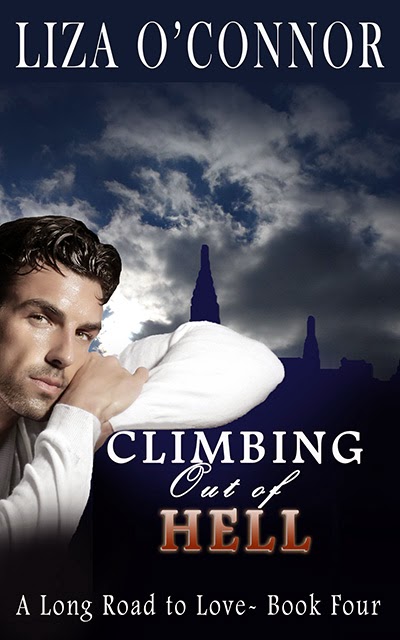 
OTHER BOOKS IN A LONG ROAD TO LOVE SERIES:

Book One
Worst Week Ever
Amazon
“Love this book and couldn't stop laughing from beginning to end.” 5 stars – Alves - Amazon

Book Three
Coming to Reason
Amazon
"Once again, Ms. O’Connor has written a brilliant book about the complexities of relationships, good and bad. Again, to me, the book is the best break up book EVER and it left my heart singing in the end. Best.Book.Ever…"

Don't forget to leave your name and email address to enter the fabulous tour prizes. You will also need to tell me what book you want for the blog prize.

RETURN TO THE BLOG HOP
Posted by Liza O'Connor at 12:00 AM