Today, I'm discussing Airships, aka Flying Dirigibles. They aren't just Steampunk fantasy. They were, during the Victorian era, king of air transportation. 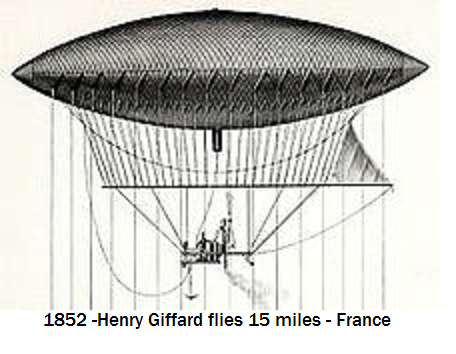 In 1852, Henry Gifford flew his dirigible 15 miles across France. His ship was a hydrogen filled, non-rigid airship powered by a 3 hp steam engine which drove a blade propeller. This was called the first Passenger-carrying Airship developed.


And where was the airplane you ask.
While there were plenty of inventions in the late Victorian Era, most were fanciful and impractical gliders. Thus, in the Victorian era, the future of air travel appeared to be the Airship.

The Wright brothers were the first to attach an engine to their glider and create the first powered airplane in 1903.

After the Wright Brother's flight. Adaptations/inventions were quickly made to the airplane. Different inventors popped up every year with different and better designs. WWI and then WWII only stimulated further investment in improving the airplane and the airship.

However, the airships still used the highly inflammable Hydrogen.


During WWI, Germany's rigid Zeppelins became a terror ship. These giant ships could quietly come in at night and drop bombs without warning. Yet the little planes had greater maneuverability and the dirigibles, full of hydrogen, could be destroyed if a bullet ignited the gas. There were men on the underside of the dirigibles with machine guns to shoot back at the planes, but the hard fact was the airships were highly inflammable.

[More than half the German Airships went down in flames.]

The war ended in 1918. Airplanes continued to decimate the airship on the commercial field.

The use of dirigibles as passenger ships faded quickly after the 1937 when the Hindenburg was caught on film as fire consumed it. The horrific sight and the anguish of commentator will live forever with those who have watched it, even if we watched it 77 years later. See if you can view this without crying.

[Odd fact: Since this disaster at Lake Hurst NJ, the airport has been the scene of at least 4 more airship disasters. You would think all airships would avoid this airport like the plague of death, wouldn't you?]

The sad truth is, the Hindenburg disaster could have been prevented. For an airship to fly, it must be filled with something lighter than air. Helium is non-explosive, but it was considered too expensive. So they used inexpensive, but highly flammable Hydrogen instead.

Thus, at the end of the day, the airplane proved to be a safer, faster, more reliable source of airpower and won the future.

Strangely enough, we still have airships floating about our skies. My first question was WHY do we still have them, but then I realized their slow and steady speed is valued when you wish to take shots from above a football stadium, or become a giant marketing billboard that slowly crawls through the sky.

For your peace of mind, I researched the mixture used in the modern day Zeppelin. It's non-flammable noble gas Helium.

[Still, it should probably stay away from LakeHurst NJ]
Posted by Liza O'Connor at 12:00 AM