Today, I'm reviewing a book completely out of my normal grazing zone. I've been so swamped that I didn't realize Felice Stevens had already published her debut novel. So off I go in search of it and HOLY COW! It is kicking ass &  taking no prisoners on the Amazon lists. #1 in it's genre and in the top #500 on the main list.

So I bought it, read it, and soon discovered
why it is having a spectacular debut entrance.
Here's my review: 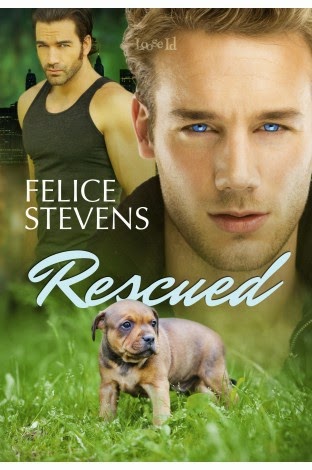 This is the first M/M novel I’ve ever read, so I cannot compare it to the genre at large. I can only judge it as a novel in general and as such, I found it endearing, poignant, and delightful. I totally loved it.

The story does have explicit sex throughout the book, but it did not get in the way of strong emotions of the story:  the fear and pain of nonacceptance, expectations of betrayal, and most of all the desperate need to be loved. While, in my opinion, a heterosexual relationship is no easy walk in the park, the homosexual relationship has far more landmines in its path. To 'come out' remains a tremendous act of bravery, and it is the first of many that a young man will face as he sorts through players to find someone to love. It is these heartfelt emotions that compelled me to keep reading to the very end in a single setting.

Ryder and Jason, both come with baggage.
Ryder’s mother despises his homosexuality and withholds contact with his family until he ‘comes to his senses’, marries a woman, and settles down. She tries to make him think the entire family hates what he is, not just her.

Ryder meets Jason on a call to rescue pit bulls being ‘stored’ in a house that is to be restored. Jason and his older brother are the contractors for the renovations.

Despite an immediate physical attraction to Ryder and vice versa, Jason continues to insist he’s not gay. Yes, there was an incident back in college, but since then he has dated women. Angry women, who eventually give up and move on when they realize he will never marry them.

Ryder doesn’t have the emotional strength to bring Jason out of his closet, too much risk to his already battered heart, so the relationship appears doomed from the start. The author does a fabulous job dealing with the natural fears and moments of brave honesty that ebb and flow as the relationship forms.

Facing his true nature is not easy for Jason. Finally, he tells his family the truth and while not everyone reacts with understanding, most do.

When a young man declares his true self, he rarely know how his siblings, parents and extended family will take the news. The author does a spectacular job of showing various reactions in this book and the pain of rejections when parents disown their child for nothing other than their true nature, and the strengthening of bonds when parents prove their love is truly unconditional.

While this book has a very fine HEA, and was superbly written, it was the journey to the HEA that won me over and why I gave this five stars, or in this case puppies.