Today, I have the fabulous Rosanna Leo over to tell you about her latest in her Predator Series.

“When a Secondary Character Demands His Own Book”

I’d like to thank the lovely Liza for hosting me today. I’m here to share a little bit about my recent release, Predator’s Fire, Gemini Island Shifters 5. This latest instalment in the series was one I just had to write. It was one of those cases where a minor character from another book just won’t leave you alone until you write him a book. I’m sure many authors understand this feeling.

Each time I’ve begun a new series, I’ve had an overall sense of where I want the series to go, but I’m not one of those authors who outlines out each and every possible outcome. I like to leave room to explore other ideas. I certainly had no idea when I began the Gemini Island Shifters series that it would be so embraced by readers and reviewers.

The hero of the latest book, Killian Moon, first showed his face in book 3, as a potential rival for the heroine. We knew Killian was a good guy, but because the hero Anton felt threatened by him, there was an aura of danger about him. I fell in love with him then. Although I had no other plans for Killian at the time, he remained in my mind. He told me, in no uncertain terms, that he wanted his own romance…and his own heroine, thank you very much.

And so, I’ve expanded on Killian’s bizarre and tragic history for book 5. We caught a glimpse of his fiery past earlier, but in his book the reader will learn exactly what impact his family had on him and how he’s had to struggle. He’s the only fire setter hero I’ve ever run into in a romance book. Fire setters are often the villain, but we see how my jaguar shifter has had to overcome his inclinations. Luckily, the romance is also hot.

I hope you enjoy this story.

Liza: I'm sure we will! Check out the gorgeous cover! 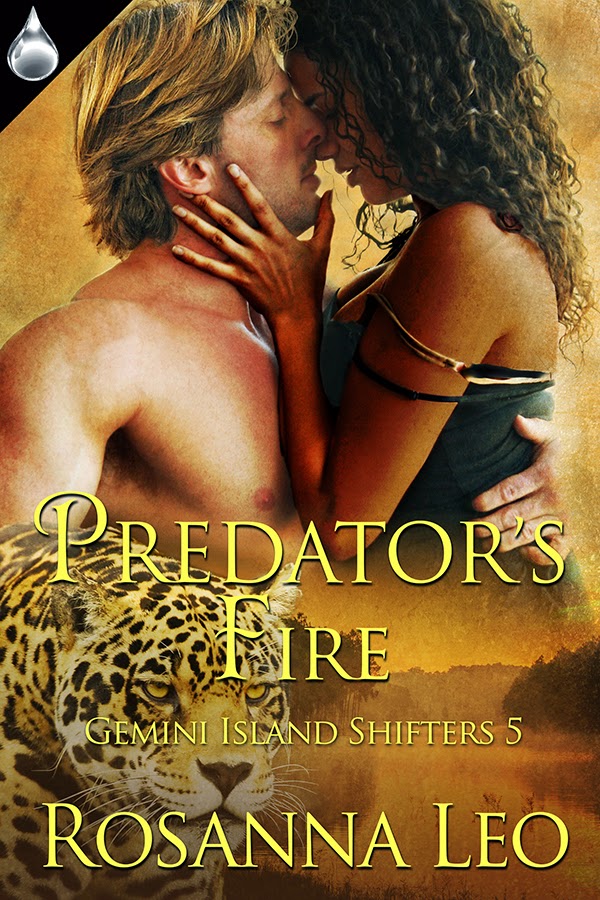 When Nina Suzuki discovers the body of her best friend Janine, her world turns upside down. Things go from bad to worse when Janine’s corpse seems to transform into that of a large, brown wolf. For the first time, Nina is faced to confront all the clues indicating her BFF was not what she seemed. A letter from the dead woman opens Nina’s eyes to a strange, new world. The same letter warns of a sinister group called the Alpha Brethren, and urges her to find Killian Moon of the Ursa Fishing Lodge and Resort on Gemini Island.

Killian Moon is a jaguar shifter and teen mentor at the Ursa Lodge in Northern Ontario. He may be a comfort and inspiration to confused teen shifters, but he also has a fiery past. His past comes back to haunt him when human Nina arrives at the resort, demanding to speak with him. Demanding answers. Can he trust her with knowledge that will not only change her life, but possibly endanger those around him?

As Killian begrudgingly tutors Nina on all things shifter, their mutual curiosity flares into passionate need. Once they touch, once they succumb to desire, there is no going back. Killian realizes Nina is his mate and they both begin to comprehend the terror threatening those on their shifter-friendly island. He is forced to confront the tragedy in his family and determines to protect Nina at all costs.
But can they protect everyone they love from a cult of dangerous shifters, intent on horror and destruction?

“How much longer do I have to wait? I want to see Killian Moon. Now.”

The feminine voice, strangely soft despite its insistence, echoed deep in his being, awakening his jaguar. The great cat roared to life, turned toward the office and inhaled deeply. Its eyes flashed in interest.

Killian breathed in at the same time, catching the scent of cherry blossoms through the door. The sweet perfume, mixed with human outrage, proved a heady distraction, making him forget why he was there. Shaking his head, he tried to dismiss the odd sensation as Ryland opened the door.

The door swung open and the first person he glimpsed was one of the clerks from reception, trying his hardest to placate the unexpected guest. “I’m sure Mr. Snow and Mr. Moon will be right back.”

And then his gaze landed on the petite human. Tapered Asian eyes, so dark and mysterious, but rimmed with circles of exhaustion. Smooth, cinnamon skin hinted at a mixed background.
Wearing no makeup, she appeared younger than she must be, but her presence and keen eyes pegged her at around thirty years old. She had a riot of curly, black hair and feminine curves that ought to come with a warning. He could see it now. Beware: this woman’s body will cause insanity in men. Even as she gesticulated at the clerk, her boobs jiggled in such a way his throat went dry.

He pictured her in a corset, her breasts spilling over delicate lace edging, and almost forgot his name.

This Nina Suzuki was damn hot and his jaguar seemed to agree. The animal licked its lips, its golden gaze assessing and appreciating every detail, from her rounded hips to her come-hither rack.

Yes, the creature uttered on a frenzied breath.

Predator’s Fire, Gemini Island Shifters 5,
will be available at
www.lsbooks.com
Amazon
ARE
Also at Kobo, B&N and other outlets.
Posted by Liza O'Connor at 12:00 AM