Forgotten No More by Christina McKnight

Peep Rep: You've forgotten what the book is called, haven't you?

Liza: Don't be silly. It's Forgotten No More by Christina McKnight.

Peep Rep: Any chance you can remember if there's a prize?

Liza: Yes, oh greedy one, Christina will be offering a $25 and a $15 gift card to two rafflecopter winners.

Peep Rep: Can I win them both?

Liza: No. She has two gifts so she could reward two people. 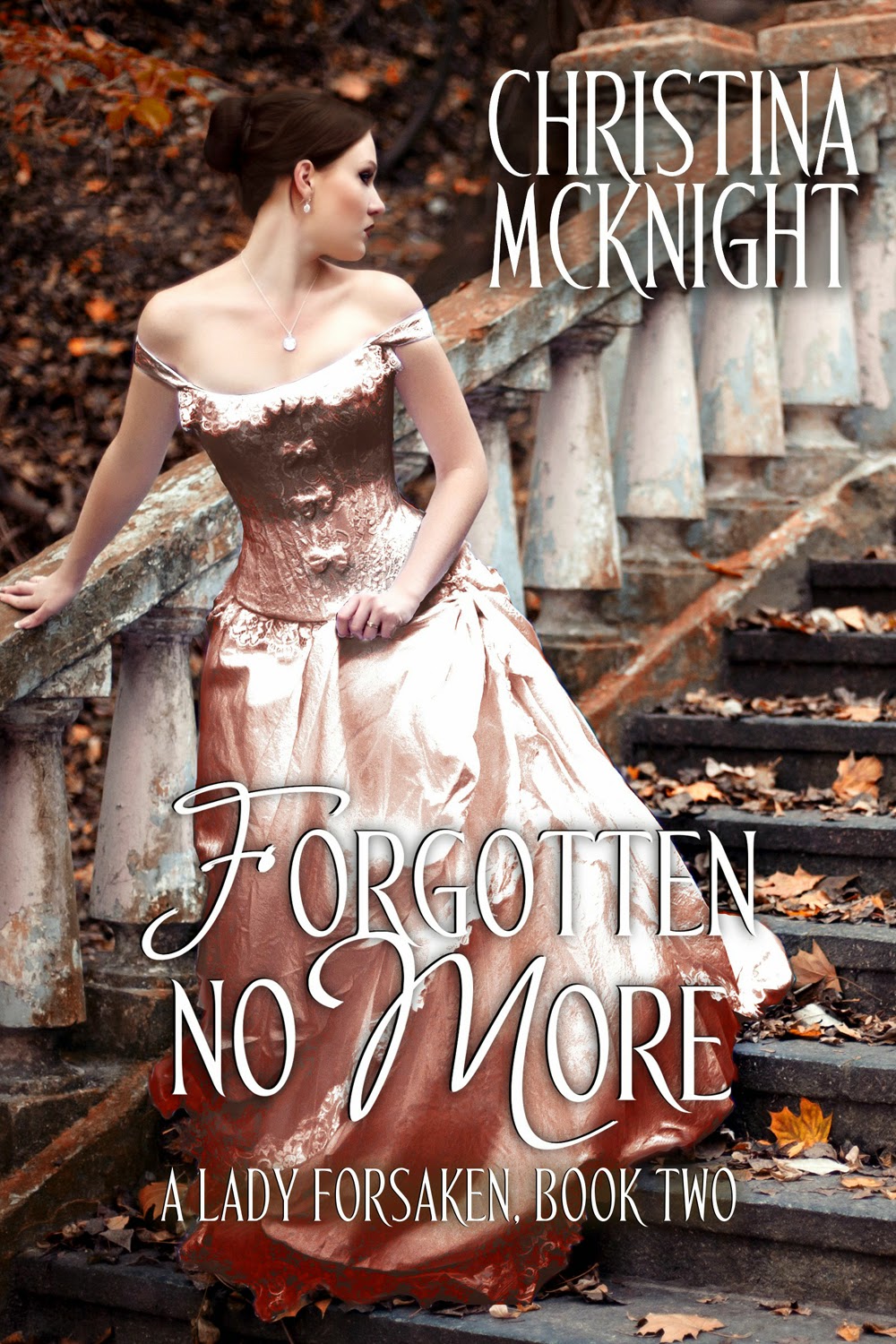 A lady forgotten by all...

Ruby St. Augustin must find the truth of her past to determine what her future holds. She only has a short time in London to uncover the identity of her real father and the secrets behind her birth. If anyone learns of her mission, she will disgrace everyone she holds dear. What she doesn’t expect is to draw the attention of a man who doesn’t care about his reputation or her past.

A man mesmerized by one...

Harold Jakeston is a man without wealth or title. Resigned to a life he loathes, Harold has the chance at a few weeks of freedom before being trapped in a future he wants no part of. When he’s drawn into the mysterious quest of a woman from his past, he embraces the opportunity to forget the life that awaits him. What he never anticipated is falling in love with a woman who ignites his desire to create a new future for himself and for her.

A love neither can abandon...

Ruby took a deep breath before trying the final drawer that could hold all the answers to her past, her true heritage. Her lungs expanded; she held the air inside. She didn’t exhale until it burned. With trembling fingers, she reached for the last drawer and pulled.

Her nicely trimmed nails nearly snapped when her grasp on the handle slipped from the force of her tug. The drawer hadn’t budged.

“Oh, poppy cocks!” she hissed. Moving her hands to the folds of her evening gown, Ruby procured a small pouch tucked neatly into a hidden pocket. Setting it on the desk, she pulled out her array of lock-picking devices, really only hairpins and small wires she’d collected since her first night—and her first failed attempt at breaking into a desk—to help her disengage the drawer.

She had to know what secrets this lord held. Would she find an envelope inside labelled ‘Abandoned Daughter,’ or a report from the Bow Street Runners with details about herself—her hair color, the particular green shade of her eyes, places she’d been, perhaps the details of her activities over the course of her life?

Nothing worth finding was that simply ascertained.

No man, married or not, would leave record of their nefarious past. It was more likely her father had not spared her, or her mother, a second thought after throwing his pregnant mistress from his townhouse in the middle of the night with no coat and no means to get home.

Ruby was anything but a fool, but she found herself continuing to search regardless. She didn’t need a signed confession—she just needed that letter opener.

Picks in hand, she knelt before the locked drawer and eyed the keyhole, blowing a wayward strand of hair that had fallen across her face. She’d been unsuccessful more often than not when attempting to open locked drawers. But luck may have been on her side this evening. She’d entered the ball with little fuss, shortly after the host and hostess had quit the receiving line. It was surprising how similar the layout of most London townhouses were. Ruby had navigated the halls of the second floor and found the room she sought fairly quickly, encountering not a soul.

The pins slipped into the lock and her tongue darted out of her mouth to lick her lips as she concentrated on moving them exactly right to click the lock over. She fought to keep her hands steady when sweat broke out across her forehead. She was running out of time.

Ruby applied a bit too much pressure and the pin snapped, falling uselessly into the locked drawer. “Damn you to hell, mother!” she cursed and sat back, wiping her slick brow.

She’d always viewed herself as a sensible girl, a dutiful daughter, and an honest friend. She could only imagine the horror on Vi’s face if she saw her now. A common thief. A midnight prowler. A defiler of privacy.

Although, it could not be helped.

She sought answers and at the moment all she had was an endless list of questions.

Gaining her feet once more, she bundled her kit and slipped it back into her pocket. She turned her attention to the long table against the wall behind the desk. Leaning over, she ran her hand along the underside of the ornately carved piece, feeling for hidden compartments or—if her luck returned—a forgotten folder of papers.

“Sherry, Miss Ruby?” an oddly familiar voice asked behind her.

Ruby St. Augustin is a forgotten lady. Her father is dead, and her disinterested mother has left her in the country while she enjoys London. However, Ruby finds her mother’s diary and discovers the man who loved and raised her was not her real father. Her unknown father lives in London, so Ruby sets out to find him.

Staying with her dearest friend, Vi, and the lady’s husband, Brock, Ruby has created a list of men who might be her father and takes to breaking into to their homes, searching their property to see if she can find an item that her mother had given her true father before he tossed her off.

The son of a mean spirited Vicar, Harold, is also staying with her friends. When he finds her sorting through the private library of a gentleman, he worries what trouble she might cause his friend, Brock and starts to follow the lady about.

Ruby does not appreciate his assistance, but she gets it all the same. As matters become complicated, their feelings become doubly so. What progresses is a long chain of events that keeps the reader’s interest. Matters do no work out exactly as Ruby expected, but an HEA can be found.

I enjoyed this story a great deal. It was well written, and consistently engaging. The story is far more complex than I anticipated, but that is what kept it so interesting. I had not read the first book of this series, but upon reading this, I certainly want to.

I give this book 5 stars for being well written and constantly engaging,
leaving me happy and self-satisfied.

Christina McKnight is a book lover turned writer. From a young age, her mother encouraged her to tell her own stories. She’s been writing ever since. Currently, she focuses on Historical Romance, Urban Fantasy, and Paranormal Romance.

Christina enjoys a quiet life in Northern California with her family, her wine, and lots of coffee. Oh, and her books…don’t forget her books! Most days she can be found writing, reading, or traveling the great state of California.

Keep up to date on her releases: www.christinamcknight.com

Don't forget to enter the rafflecopter!