Today, we have Gina Danna
and her latest book, Love and Reckoning. 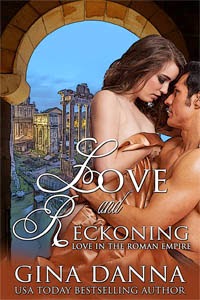 Conquered, beaten, sentenced to die in the Colosseum, Ganius of Gaul escapes his execution only to find himself enslaved as a gladiator. His rise to champion ensures his life, but does nothing to lessen his desire for vengeance against the Roman soldiers who destroyed all he knew.

Locked into a repugnant betrothal, the beautiful Roman Aurelia turns to her brother’s champion gladiator for help. Promising him his freedom if he helps her escape, Aurelia soon discovers she wants not only Ganius’s help, but to capture his heart as he’s captured hers.

In love with his sworn enemy, Ganius realizes Aurelia is the key to his freedom. But to take her with him would risk both their lives, yet leaving her behind to be a pawn in her brother’s machinations is a wretched alternative. Ganius must choose - love of a Roman or freedom to make the Romans pay. This is a fight the champion gladiator might lose...

Aurelia’s heart skipped a beat when Ganius arrived. Her eyes skimmed his body. It was barely clad, only with a well-worn subligaculum covering his manhood and a simple thick leather balteus at his waist. She did note the wraps on his wrists, dirty from sweat and training on the sands below. In fact, his skin gleamed from hard work, the sheen displaying his defined muscles acutely. The dusting of hair on his chest seemed more pronounced and it made her wonder if he’d been shaven clean of it before. Or perhaps, the grit of practicing made it more noticeable. He stood stoically, gaze locked on the window, not on her. It made him look like a statue, except she found this statue too enticing to be just admired and forgotten.
At first, she couldn’t say a word, her mouth too dry to speak. She licked her lips. A moment more of silence passed before she swallowed hard. Lifting her chin, she squared her shoulders.
“Slave, I brought you here to see what form of a beast would take me so blatantly last night.” Her attempt to sound like a true domina came out arrogantly. But did that matter? He was a slave, after all.
His jaw tightened. “Apologies, Domina.” But his tone was the opposite.
That was all he’d say? Her temper flared. “That’s the best you can do?” she demanded.
His eyebrows furrowed as he glanced at her. There was a harshness in his eyes, a tick in his jaw that he quickly hid, lowering his gaze before her.
“Speak!”
This time, he raised his head, his eyes locking on her. “I did exactly as you wanted me to do.” He took a step toward her. She suddenly had a flush of warmth pass through her as he looked down her body and back up. Those almond eyes she found in her dreams—dreams that became heated with an intensity she couldn’t define—only to wake her hot and flustered.
Of course, the memory of her betrothed often flashed into her mind, just like now. Titus appeared grisly, wrinkled, bald-headed and old—not at all what she wanted in a husband. An iced shiver raced down her spine at the mere thought of him touching her.
She blinked and realized she’d taken a step closer to him. The scent of dirt and sweat filled the air, mixing with the smell of the garden lilies and roses that decorated her room. But the most enticing scent was the masculine flavor of him. She recognized it from last night’s encounter. So much so, she almost didn’t want to bathe it away.
“I thought I displeased you,” he stated low and huskily.
Blood raced through her. “No, I believed it the other way.”
He shook his head. Another step toward her made her see clearly the lines in his face through the grit and color streaks made by the sun. Those almond eyes held an inviting hint.
This whole meeting was utter madness. He was a slave. A gladiator. She was a fine Roman lady. To have him here meant one clear meaning to anyone who’d know, and she prayed to the gods Caius would never find out. Fear and attraction twirled inside her. This slave should disgust her, yet he didn’t. There was something that held her attention, made her pull him here.
Before she could speak, he raised his hand, his fingers under her chin, tilted her face up so he could see straight into her eyes.
“This path holds no purpose for you or me,” he whispered. “Except to taste the nectar of the gods.”
His lips touched hers. It was light, but it ignited the spark inside her. When he didn’t release her, she came closer, the heat of his body searing the silk tunic she wore. Her arms reached around his neck as she pressed her mouth against his, waiting for him to open to her.
About to fall into the moment, his hand took her arms and pushed back.
“Domina, no.”
Furious he broke from her, she wanted to scream, but then she saw he was breathing hard, as deeply as she was. They both panted with desire. The heat in her lower abdomen grew and that emptiness in her womb craved fulfillment.
Needing to find footing, she sucked in and noticed the bulge of his loincloth. Boldly, her cheeks burning, she argued, “Your cock claims otherwise.”

Gina Danna has a true gift for taking you back in time. In Love & Reckoning, we go back to 100 CE, the era of gladiators and Rome’s dominion on the world, where the Roman conquerors make slaves of the conquered. It's a time when nothing is forbidden to those in power.

While many strands of love are tangled in this book, the main strand is that of a young roman woman and a newly made slave who earns his life back by defeating gladiators and becoming a master of the sands. Ganius only has revenge and death of Romans on his mind when his life is spared and he's made a gladiator. But then he meets his domina, Aurelia. And despite she's promised to another and he wishes to kill all Romans, they fall in love. But how can this ever work out?

While not entirely happy with all the minor resolutions, I thought the major resolution to the problem above was pure genius. Which is typical Gina.

The author imbues such depth, emotion, and captivating action in her writing that it will suck you right in. Her writing is so vivid that movie producers seriously need to check out her books. This story has everything: Sex, love, passion, battles, blood, betrayals, defeat, and defiance. You might be overwhelmed at times, but you’ll never be bored.

I give this 5 stars.

A USAToday Bestselling author, Gina Danna was born in St. Louis, Missouri, and has spent the better part of her life reading. History has always been her love and she spent numerous hours devouring historical romance stories, always dreaming of writing one of her own. After years of writing historical academic papers to achieve her undergraduate and graduate degrees in History, and then for museum programs and exhibits, she has found the time to write her own historical romantic fiction novels.

Now, under the supervision of her three dogs and three cats, she writes amid a library of research books, with her only true break away is to spend time with her other life long dream —her Arabian horse—With him, her muse can play