How Bedlam brought Jacko to his true love

Since Jacko has to save his future love's mother from Bedlam, I thought I'd re-share my blog on Bedlam.


The first public mental institution in England was built in 1247  (Medieval Times)  at the Priory of St. Mary of Bethlehem on a site in Bishopsgate. (now below Liverpool Street Station). It remained there until 1676.

However, it did not begin its life as a mental institution. Originally it was formed as a place of alms collection.
While it is possible they cared for the mentally ill in the 14th century, the first evidence of such is in 1403. The document notes the presence of 4 pairs of manacles, eleven chains, six locks and two pairs of stocks. While little is known about the care of the patients during medieval times, by their inventory, one can assume it was more captive than caring.

The place acquired several nicknames in the 14th century from Bedleheem to Bedleem to Bedlam.

In 1568 the place opened its doors to public viewing.
The first definitive documented visit was in 1610, when Lord Percy paid 10 shillings to amble about it's deranged denizens. Visiting the mad became a grand entertainment for the rich. It also inspired a great deal of plays in which brought the name Bedlam into common use.

The first building stood for 429 years (1274-.1676) I cannot imagine the quantity of ghosts and tortured souls it hosted over that time.


The next site for Bedlam was on a site in Moorsfield designed by Robert Hooke.

Public visitations soared once they had moved the inmates to their new home. Here's a documented perspective of a man who visited in 1725

.. you find yourself in a long and wide gallery, on either side of which are a large number of little cells where lunatics of every description are shut up, and you can get a sight of these poor creatures, little windows being let into the doors. Many inoffensive madmen walk in the big gallery. On the second floor is a corridor and cells like those on the first floor, and this is the part reserved for dangerous maniacs, most of them being chained and terrible to behold. On holidays numerous persons of both sexes, but belonging generally to the lower classes, visit this hospital and amuse themselves watching these unfortunate wretches, who often give them cause for laughter. On leaving this melancholy abode, you are expected by the porter to give him a penny but if you happen to have no change and give him a silver coin, he will keep the whole sum and return you nothing

While impressive, the baroque building deteriorated
quickly. Floors sank, walls buckled, roofs leaked. It was as if the building took on the insanity of it's inmates. Thus, a mere 139 years in existence, a new building was created at St George’s in 1815

The abuses within the walls of Bedlam either worsened or became better known in the early 1800's. Complaints of naked inmates chained to walls, the docile inmates being put in with the dangerously insane, and the thuggish behavior of the keepers came to light.

One would like to think that when they moved to inmates to their new home, conditions improved. Sadly while stylish on the outside, the inside was quite miserable. The steam heat did not work, the basements were extremely damp and the upper windows were not glazed.

Restraints and physical punishment remained the norm. To avoid being publicly displayed, the wealthy preferred private asylums for their incarcerations.

One improvement: they had a clean water supply so the rooms could be washed down, reducing dysentery and cholera. However, it does open up more opportunities for abuse while the guards washed down a cell and it's occupant.

Until 1864, the Criminally insane were held at Bedlam, at which point they were moved to Broadmoor Hospital.

I found very little documented about the late 1800 conditions at Bedlam. What preceded it was very bad, so without proof to the contrary, I'll assume conditions remained the same or worsened, despite the cries for improvements resulting in legislative acts in 1815,1828,1832,1845.

When I reviewed these acts, I found no comments to the care of patients at all. Only tweaks to whom could commit a person against their will into an institution.

Given the 'rights of men' at the time, I'll assume the wealthy could arrive after public viewing hours (If they still existed. I could find no proof either way) and buy access to any inmate for their pleasure. I base this on the assumption inmates were seen more like animals than humans, and the hardened guards would allow anything done to their animals for coinage as long as they didn't get in trouble.

Thus, in my Late Victorian Xavier & Vic series, when Vic, who is a young woman, living her life as a man, needs to determine if a woman has been wrongfully placed in Bedlam by her husband, she gains access during a late night 'men only visitation' tour.

Verifying Mrs. Carson is there, and with the help of the gypsy pirate Jacko, she releases a great deal of the female inmates to cause a distraction while Jacko rescues the old woman.

She hadn't expected the inmates she released to become quite so violent, but given the purpose of the other men who took the tour, she couldn't muster any sympathy for the fellows. Served them bloody right!

The Bedlam guards could not handle the ensuing riot, and London police had to be called in to quell matters so this is the first riot Vic causes while saving a client.

Fortunately, Jacko gets Mrs. Carson safely out of Bedlam and in a carriage before the police arrive. Upon taking the lady to her daughter's estate, in very short time, Jacko falls completely in love with the old lady's daughter, Alice Collins.

Despite Alice's clear attraction, he sees no hope for this to end well. She is a lady of society, and he will always be seen as Jacko, the gypsy, thief, and pirate. 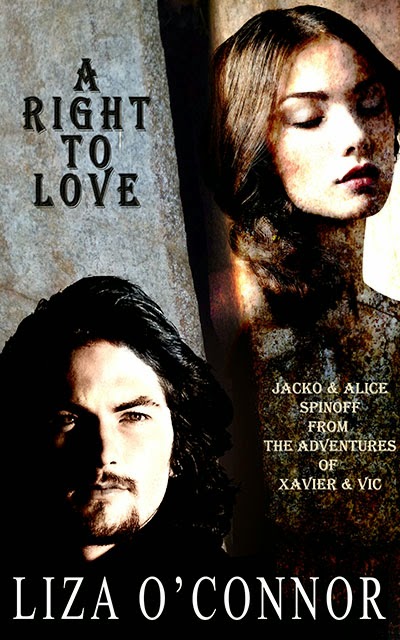 What he doesn't yet know is Alice was ruined by her step-father years before and thus believes no man of worth will ever want her.

But Jacko is no ordinary man...
And everyone should have the right to love.

Free with Kindle Unlimited
Posted by Liza O'Connor at 12:00 AM