Daisy Banks shares To Eternity, book 2 of the Timeless Series

Today, I have the talented Daisy Banks and she's got a fabulous book to share with us, and boy is it gorgeous. Welcome Daisy!

Daisy: A Happy New Year to you and your readers, Liza. Thank you so much for hosting me and helping me celebrate the release of my new book To Eternity, the second book in the Timeless series.

I am presently in the process of writing Out of Time, Book Three in the series and hope to have it completed this year.

I couldn’t have been more pleased when I discovered this book released on a full moon. You can check the moon phase here. http://www.dacre.net/moon/moonphase.html

Those of you who read my blog will know I do quite a few things by moon phase. The new moon helps with inspiration and ideas, the waxing moon for growth and development, the full moon for extra umph with things I’m working on, and once it changes to the waning moon, I work on correcting things. The waning moon is a great time for editing.

Therefore, to find my story To Eternity-wild beneath the moon-Book Two in the Timeless series, and my book Timeless are both available in print as well as e-books for the first time during the full moon is very exciting for me. I’m sure you can see why I thought there was a bit of full moon magic at work.

It also seemed very pertinent to me that To Eternity, with main characters focused on and governed by the moon, should release when the moon is full. What better for a werewolf story filled with passion and love, desire and danger?
I do hope you enjoy this little excerpt.
Thanks for reading.
Xx
Daisy Banks 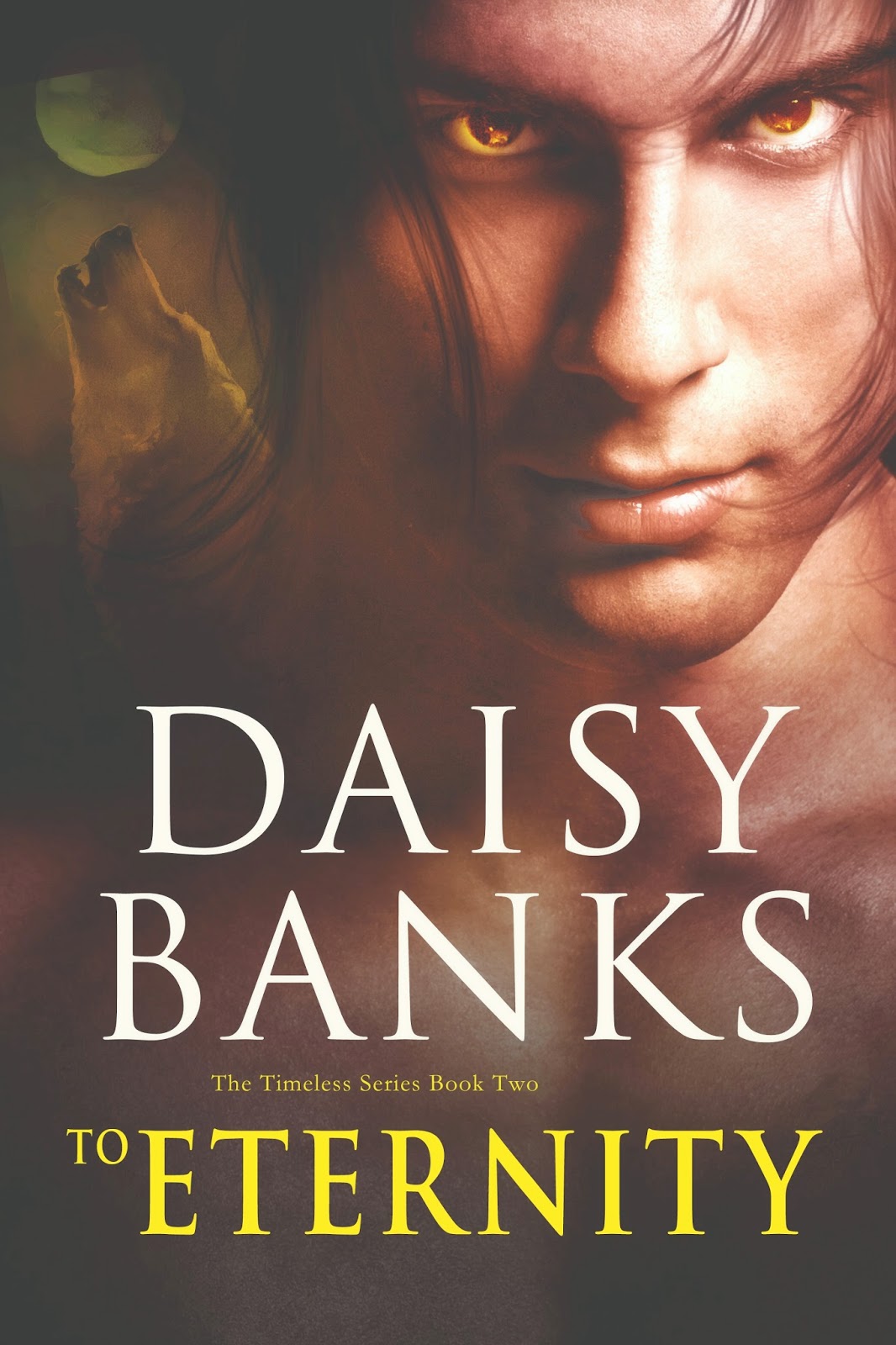 To Eternity-wild beneath the moon
Book Two in the Timeless Series.

For four centuries Magnus has lived according to the dictates of the moon, his heart isolated by the domination of his wolf nature. Now fate has brought the beautiful, independent Sian to his house at Darnwell and their irresistible attraction has exploded into a white-hot passion. Yet she is not wolf, and the time has come for her to embrace the change. But once she completes the ritual and claims her place next to Magnus, the rivals will appear on the horizon…

Heartbeat rising with concerns for their discussion, she went through to the bedroom. She dumped her sweater on the chair before she opened the door to the wet room. She caught a glimpse of his slick, dark, wet hair dripping on his broad shoulders. The water cascaded down his back to his firm-muscled ass. Still, his pain beat at her like a night fury. Not anger, but an aching hurt she could do nothing to relieve. She called into the shower. “Shall I pour you some coffee?”

The full power of the spray, along with a waft of steam, drowned out his response. She closed the door. Rather than wait, she poured two cups anyway. Curling her hand around her cup, she settled herself in the huge, oak chair in front of the hearth to wait for him to join her. The carving at the end of the curtained four-poster bed, of two wolves with bodies entwined, spoke to her the same way it had the first time Magnus brought her into this room he’d kept as a private sanctuary for so long. This hand-chiseled image, a reference to his parents who had commissioned the monumental bed, gave her hope. They’d loved, as humans and wolves, their pairing bound in a permanent connection. They’d produced offspring. A son, this magnificent, wonderful man, wolf, person. A wave of emotion brought a lump to her throat while she weighed the possibilities against the current reality. Blinking fast, she swiped at her eyes.

This mood would bring her no good. Crying wouldn’t solve a thing. She’d end up with a sore throat, red eyes, a swollen nose, and none of it would help. If Magnus found her in tears, it would stoke his guilt further. He might even try to send her back to her flat in London. The line she trod with him demanded the balance skills of a gymnast on the beam. Yes, he cared about her, she was certain…up to a point.

Maybe he loved her enough to send her away. Fresh tears welled for she could imagine his explanation. I can’t hurt you like this anymore. You must leave.

Heaven help her, he’d mean every word of it. He’d send her away, then bury himself in majestic misery here while he waited for her to age and die.

“Bugger it all.” Her voice cracked as she set her coffee cup down on the small table beside her chair. “I’m not going anywhere. I’ll not leave you, not unless you take me back to London and dump me there, Magnus. I belong here.”

The oak wolves stared back from the wood panel with a silent offer of agreement.

“Too right,” she said forcing herself to relax. “I agreed to stay with him and I will. He’ll just have to get accustomed to a female being around all the time. I’m going nowhere.”

“Had you planned on going somewhere?” he asked, toweling his dark hair as he walked in from the wet room.

“No, I was giving myself a bit of a pep talk.” She sucked in the sight of his broad shoulders, the ripples of muscle on his chest. Her gaze moved down to the towel he’d draped around his middle, clinging snug to the damp curve of his ass. Rising from the chair, she hurried to him, wrapped her arms around his waist, and laid her head on his smooth damp shoulder. Her previous experiences had been nothing like this compulsive need for Magnus. When she was nineteen, she’d had a bit of a glow about one boyfriend, but it was a timid kind of affection, rather like standing under a warm shower. With Magnus, she swam in an ocean of unfamiliar sensations, and though some might be scary, she didn’t want them to stop. She wouldn’t stand by silent if Magnus tried to end their relationship because of his guilt for who and what he was, even if he thought it would be good for her.

You can read Chapter One of To Eternity free on my blog in the My Books section. Take a peek.

Email ThisBlogThis!Share to TwitterShare to FacebookShare to Pinterest
Labels: Book 2 of the Timeless Series, Daisy Banks, To Eternity