It's not the deadliest, nor the fastest poison, but since the first human decided to poison other annoying humans, it's been the most popular.

By the Victorian Era, it had become the Poison of Choice.  Probably because it was easy to obtain at the pharmacy or apothecary and could be given in food or drink, having little taste or odor. In addition, it was used in many household items, and naturally shows up in various foods, so if you were very clever, the doctor could declare it an accidental death.

In fact, even today, you could be consuming low doses of arsenic each day. The average person will ingest about 8 mg of arsenic a day.

I'm talking today, not in olden days. Here's some Consumer Report data to worry you:

In a sample of 88 apple and grape drinks 9 samples had higher levels than the gov allows your drinking water to have.

(Yes, your drinking water may have small amounts of arsenic given the metal is quite common and ubiquitous.)

But back to the juice. People who drink apple juice have 20% more arsenic in their urine than non-apple drinkers.

The other modern main arsenic provider is RICE, especially Rice Syrup. Rice grown in old cotton fields in the south are believed to have high arsenic content because arsenic was used as a pesticide when the lands were cotton fields. Arsenic can remain in the soil for a very long time, and some vegetables mistake it's chemical marker as nutrients and gather it up from the soil.

Okay, I've terrorized you enough about our modern day arsenic worries. Let's return back to the Victorian era.

Arsenic was used in fly paper, wood floors, curtains, fabrics, candles, ornaments, and even tobacco (which was extremely popular with the men.) Thus, if a heavy smoker who worked in a fabric factory, and burned candles in his boarding room that had floors made of heavily arsenic doused wood, then the doctor might rightfully declare his death to be an accidental poisoning or a natural death.

But, many at the time believed there was an epidemic of poisoning going on as well.  In 1840, the Statistic Head of the General Register Office (Someday I may write a blog on exactly what this job entailed, but right now, lets just focus on his claim, because it implications went all the way to the Parliament.) William Farr wrote: Arsenic 'is generally asked for to kill rats, but it is questionable whether arsenic kills more rats than human beings."

Parliament was so moved that in 1851, they passed an Arsenic Act. This forbid a pharmacist to sell arsenic to a person, unless he knew them. This is rather like the states that require an X day wait before you can actually buy the gun you wish to purchase. A wife who wished to kill her husband would need to spend a few weeks buying other things at the store, so the pharmacist would 'know' her before she complained of rats and returned home with the evening meal of arsenic.

So they added another bit to the law. Each pound of rat poison must have  an ounce of indigo coloring or soot mixed in with it. If the indigo used a lye base, then you'd probably notice. But there were other options that might no be noticed.


Yes, it took them 11 years to come up with a law that would only dissuade the real rats from eating soot and lye flavored food.

Another interesting tidbit: If you read my earlier blog on Antimony, you'll recall I declared the 3 musketeers of poison to be Antimony, Arsenic and Silver because they are often found together in nature.

Well, it turns out that the symptoms of Antimony and Arsenic are remarkably similar, only Antimony leaves a strong taste of metal in your mouth, while Arsenic has a much milder metallic taste.
Here are it's main sympton:

The main differences appear to be the lack of odor and a milder metallic taste, and it could be served in a larger dose without the body rejecting it and hurdling it back out. But like it's buddy poison, Arsenic attacks all the internal organs.

It is also the poison used to attempt to kill one of my sleuths in Book 4 of the Adventures of Xavier & Vic. A vengeful butler uses soot flavored arsenic in coffee despite the fact tea was requested. This resulted in only a single sip taken and then spat out. Still, the fool had poured enough arsenic in the cup to kill a person 20 times over, so my sleuth remains in danger. 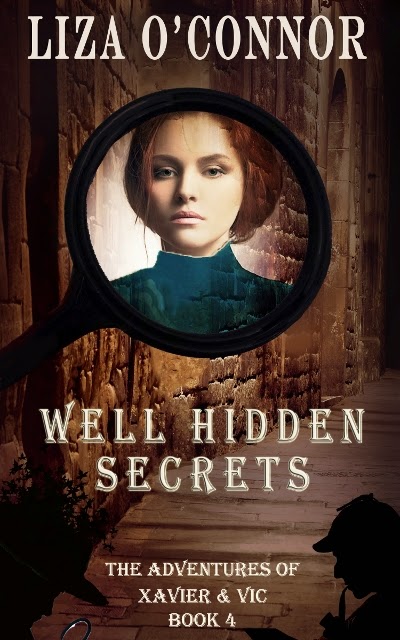