A No Good Itch by S.D. Skye

Today, I have S.D. Skye and A No Good Itch. This is book 3 of a fabulous series.

Peep Rep: Does she bring prizes?

Liza: Sit down Peep Rep, because she has fabulous prizes: An Amazon Kindle Fire HD 7 + a $25 Gift Card. (US Only) to a randomly drawn winner from the rafflecopter.

Peep Rep: *falls to floor in a faint*

Liza: I told him to sit down. Not my fault he never listens. So while Peep Rep is out of commission I want to interview this book. 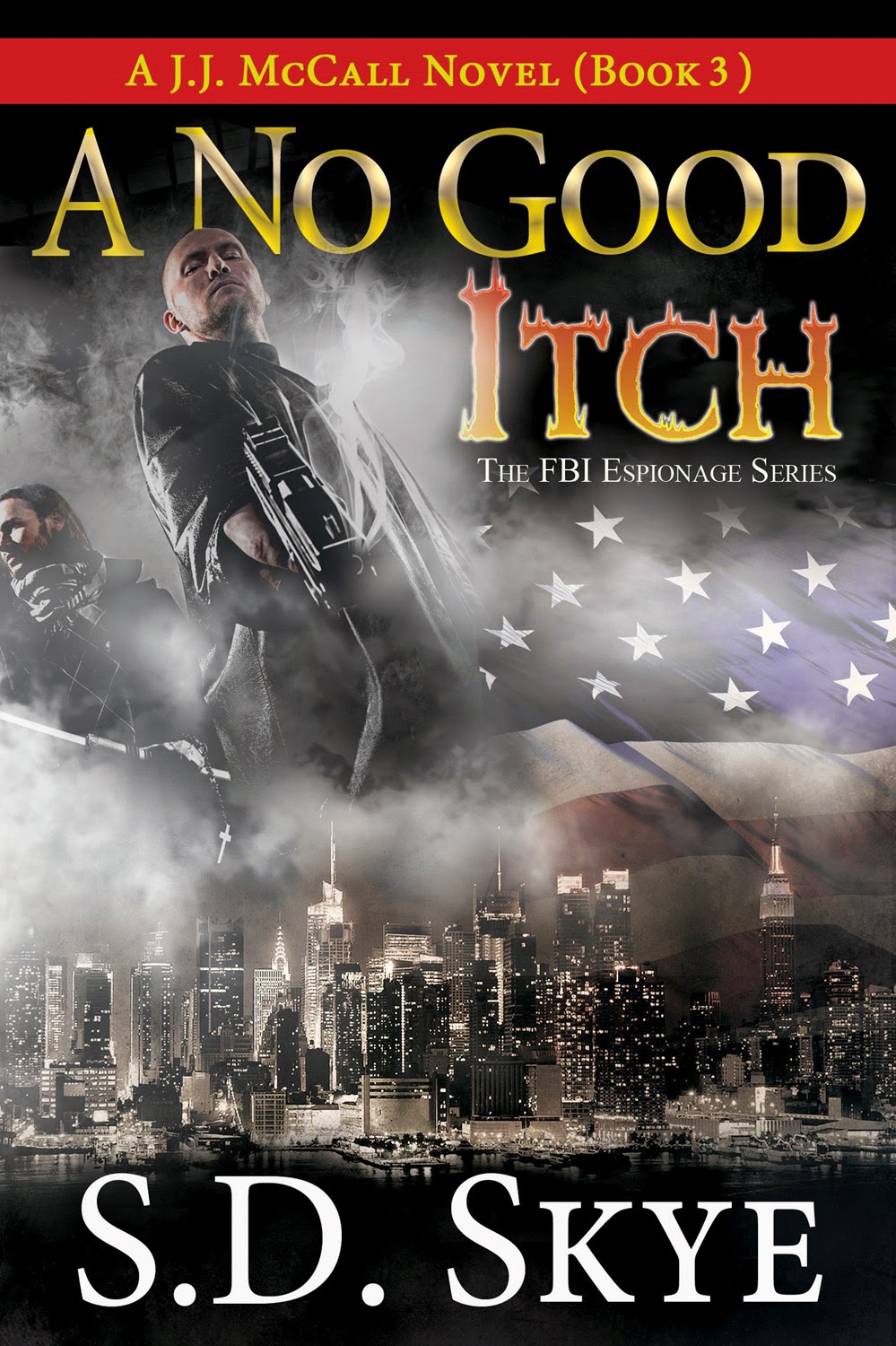 Liza: Since all S.D. Skye’s books have an itching problem, I’ll call you Good, okay?

Book: That name made me itch…in a hemorrhoid, poison ivy kind of way. Try again.

Book: That’s like taking out my appendix and then giving it back to remove my kidneys. Maybe I’ve been watching too many mafia flicks. How about “No Good”?

Liza:  Great! Peep Rep is back. Okay, I’ll call you No Good. But don’t give me any trouble, or you’ll be just another “Itch’. So what’s this book about?

No Good: The FBI and Italian Mafia work together—

Liza: Hold on. That can’t happen.

No Good: They do make strange bedfellows, I’ll grant you, but the hero, FBI Special Agent Tony Donato, is also the exiled son of a crime boss. When it comes to the mafia, he’s family…AND he’s “family.” *wink wink* *nudge nudge*  He’ll need his “family’s” help when a vicious Russian Organized crime figure, operating at the behest of Russian Intelligence, lands in The Big Apple.

Liza: Oh, I have friends there. What are the Russians up to? And how are the Italian mafia involved? I’ve tried to avoid those guys since one threatened to blow my head off.

Peep Rep: She started it by flying him the bird.

Liza: The world doesn’t need to know that. So tell me about the Russians.

No Good: The Italian and Russian mafia are connected by two things. No, not Brooklyn and testosterone.

No Good: Crime and money. The ties work when both sides are making money. But things go bad when one side starts making enemies. Unfortunately, the Russians make enemies of friends when the Russian intelligence henchman, infamously known as Mashkov, avenges the death of slain a Russian sleeper agent and accidentally hits the son of an Italian crime boss—who is also Tony’s brother.

Liza: Well, that explains why the Italian mafia is involved. So what does the FBI do?

No Good: Special Agent J.J. McCall and Task Force Phantom Hunter arrive in New York to take down the financier for a Russian spy ring but find out they’ve got bigger fish to fry when they end up smack dab in the middle of an emerging war between the mafia.

Liza: Hope they bring their guns.

No Good: They’ll need more than guns when trying to put this ugly baby to sleep. Stopping Tony’s family from avenging his brother’s death and causing a bloodbath is one thing -- trying to dismantle the financial hub of the most insidious Russian illegals network in U.S. history would be almost impossible. Except the Bureau has J.J. and Tony, the FBI’s not-so-secret weapons.

Liza: They should wear bulletproof vests, too. What else is going on?

No Good: Isn’t that enough?

Liza: Not for one of SD Skye’s books it’s not. I haven’t seen anything this twisty-turny since making my smoothie this morning in the Nutribullet.

No Good: You know my author! Meanwhile, CIA Case Officer Grayson “Six” Chance is in Moscow.

Liza: What’s he doing there?

No Good: He’s trying to capture a fugitive American who has stolen White House intelligence and is planning to pass it to the Russians.

Liza: Sounds like Skye is putting her characters through the ringer again.

No Good: More than you can imagine. The case gets ugly when the CIA uses some extreme tactics and puts Six in a moral dilemma he may not be prepared to handle.

No Good: As if J.J. didn’t already have enough on her plate, she’s also got to deal with her mother’s case.

No Good: The woman has no limits! J.J.’s mother is a fallen FBI Agent who died under mysterious circumstances while working on a controversial case. Well, J.J. finally learns the truth surrounding her mother's death in the line of duty and her life may never be the same.

Liza: This sounds like another great novel. Can’t wait to read it.

Liza: True, but wouldn’t I love them better if I read them in order?

No Good: Well, for personal reasons, I’d rather you read me first and then read the others, but do what you like. *sniff  sniff” No, no. I’ll be fine…after I get my spine stretched and my pages turned. I just hope they don’t dog-ear me again. *sniff*

Peep Rep: Congrats! You made the book cry. That’s a new low.

The Sheriffs walked J.J. and Tony through a series of security doors until they reached the interrogation room. They left their overcoats with their escorts and tugged their suit jackets straight before entering. The sight of Kendell Phillips’ murderer shrouded in orange and shackled at the hands and feet gave J.J. a burst of pleasure she hadn’t felt since her early morning romp with Tony. A reddish blue bruise circled his eye and spread to the cap of his jaw. His gaze disintegrated under the weight of her glare and fell to his twiddling thumbs. She prepared to speak when an overwhelming scent jarred her senses—the smell of contemptible swine.

“My, my, my,” J.J. said to Maddix. “What an ugly fall from grace. Too bad they don’t make an Armani perp suit. You used to wear him so well.”

Positioned across from Maddix, Tony scanned the rat’s face and looked at him with a pained expression. “Rough night, eh? Did they forget to put you in solitary? Looks like you’ve been mingling with the locals.”

“Nothing I can’t handle,” he said with a shrug. Then he leaned back, spread his knees wide, and placed his hands in his lap. “So, this is the reason you came all the way to Shangri-La? To gloat?”

J.J. savored his misery and then vexed him with a tight smile. “We’re here to discuss your comrade in arms, Hawk—Gary Mosin.”

“Newsflash, doll.” Maddix forced out a grating laugh, overplaying his weak position just a smidge. “You get nothing from me, not without a deal. I want immunity.”

“Listen, you ain’t gotta make this difficult. We didn’t come here to pick a fight. Give us the information we need, and you can go back to counting the tiles on the ceiling . . . or whatever it is you do on the inside.” Tony contrived a calm demeanor as he reached into his pant pocket and pulled out a pack of Marlboro 100s and a book of matches. He slid them to the middle of the table until they stopped beside a plastic ashtray. “Our treat. Enjoy. But if you choose to stay on the difficult route, we can reverse course any time.”

Maddix cupped his hands and with no show of gratitude, pulled the offerings to the table’s edge, his shackles jangling with his every move. He folded back the foil on the corner of the pack and knocked the open end against his wrist until a cigarette emerged. Then his brow drew together, furrowed in confusion. “You don’t have a clue, do you?” His gaze ping-ponged between J.J. and Tony before he shook his head. “That’s why you’re here. You don’t know!”

S.D. Skye is a former FBI Counterintelligence Analyst in the Russia program and supported cases during her 12-year tenure at the Bureau. She has personally witnessed the blowback the Intelligence Community suffered due to the most significant compromises in U.S. history, including the arrests of former CIA Case Officer Aldrich Ames and two of the Bureau's own—FBI Agents Earl Pitts and Robert Hansen. She has spent 20 years in the U.S. Intelligence Community.

Skye is a member of the Maryland Writer’s Association, Romance Writers of America, and International Thriller Writers. She’s addicted to writing and chocolate—not necessarily in that order—and currently lives in the Washington D.C. area with her son. Skye is hard at work on several projects, including the next installment of the series.

For more chances to win, follow all the tour stops
Posted by Liza O'Connor at 12:00 AM