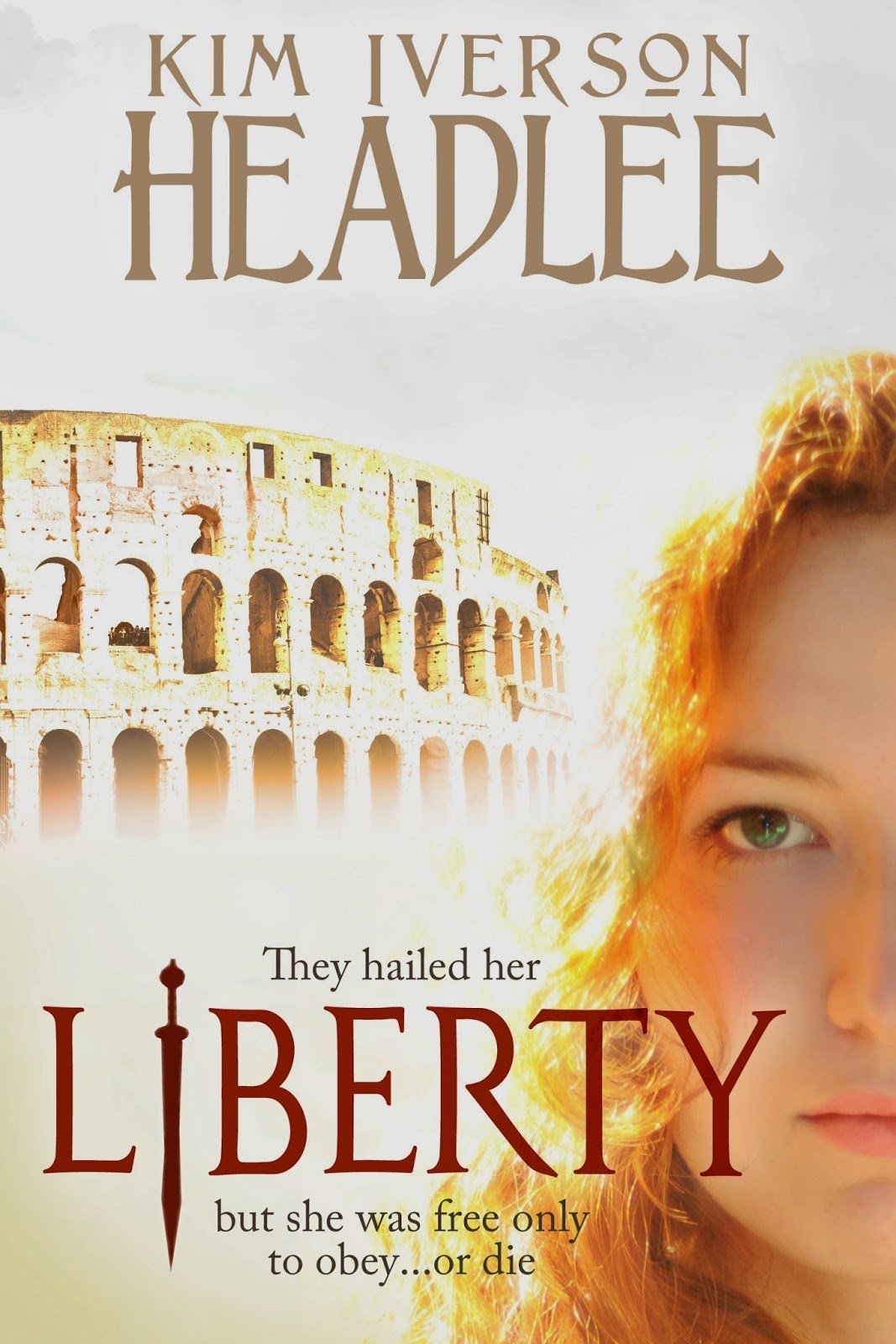 They hailed her “Liberty,” but she was free only to obey—or die.

Betrayed by her father and sold as payment of a Roman tax debt to fight in Londinium’s arena, gladiatrix-slave Rhyddes feels like a wild beast in a gilded cage. Celtic warrior blood flows in her veins, but Roman masters own her body. She clings to her vow that no man shall claim her soul, though Marcus Calpurnius Aquila, son of the Roman governor, makes her yearn for a love she believes impossible.

Groomed to follow in his father’s footsteps and trapped in a politically advantageous betrothal, Aquila prefers the purity of combat on the amphitheater sands to the sinister intrigues of imperial politics, and the raw power and athletic grace of the flame-haired Libertas to the adoring deference of Rome’s noblewomen.

When a plot to overthrow Caesar ensnares them as pawns in the dark design, Aquila must choose between the Celtic slave who has won his heart and the empire to which they both owe allegiance. Trusting no man and knowing the opposite of obedience is death, the only liberty offered to any slave, Rhyddes must embrace her arena name—and the love of a man willing to sacrifice everything to forge a future with her.

Through the tunnel across the arena to Marcus’s left appeared the beautiful, blonde Moridunum gladiatrix. Garbed in silver-and-crimson Roman armor, with a shortened kilt that flashed the curves of her buttocks through silver-studded red fringes, she drove a chariot pulled by two magnificent white mares. As she circled the arena, the announcer introduced her as Hyperosa. She wore a gladius strapped to her left hip, and a whip lay coiled against her right thigh.

The crowd lifted her name unto the heavens.
Hyperosa halted the chariot in front of the governor’s box and dismounted to beat her shield with her gladius as attendants drove the chariot back into the tunnel. She looked every inch the invincible Roman giantess, and the Roman majority in the audience adored her.

Light flared, a loud crack sounded, and the tunnel on the right disgorged black smoke. Many spectators, gasping and gaping, shifted upon their benches.

Jamil’s gladiatrix appeared within the smoke’s acrid swirls, armed in midnight leather, her flesh smothered in mysterious blue designs. The effect was that of a Picti raider having just made a kill, and the slave’s severe countenance, sweat-limned muscles, and heaving chest enhanced the notion. A sheathed gladius hung from her belt, and she gripped a spear in her right fist.

As both women saluted Marcus, the announcer introduced Jamila Nova as “Ruth, Menace of the North!”

A strange expression cascaded over Ruth’s face. She regarded the announcer for a moment, as if confused by the sound of her own name, before focusing her attention on her opponent. The Romans and Celts in the crowd united to boo her supposed Picti barbarism.

Marcus’s heart broke for her. But all he could do was start the match.

That, and renew his secret prayer with redoubled fervor.

The women faced off in the center of the arena. Howling to exasperate the dead, Ruth charged with leveled spear and reckless abandon. Hyperosa released her whip and snagged the spear, to the crowd’s thunderous approval. But when she would have wrenched it away, Ruth twisted it and yanked. The whip’s handle went flying. Ruth threw aside both weapons, drew her gladius, and closed in. Hyperosa recovered from her astonishment to confront the blue-painted dervish.

They met with a clash of arms as fierce as any bout between seasoned men. The veteran Hyperosa landed her blows more accurately, but Ruth was by far the more swift and agile, causing some of her opponent’s strikes to miss. The rest, Ruth blocked with her gladius in an impressive show of strength.

As the match progressed, the crowd warmed to the fiery Pict.

The warmth Marcus felt for her he attributed to a different reason.

He turned toward her owner, who was perched on his usual seat in the governor’s box, leaning forward to rest elbows on the rail and chin atop his steepled fingers.

“Name your price, Jamil.” His voice felt husky, and he cleared his throat. He wasn’t sure how much raw desire he’d managed to bleed from his tone.

Jamil’s gaze never left the arena. “You must speak with Hyperosa’s owner, Aquila.” As the women paused for breath after an aggressive exchange, he smiled smugly at Marcus. “Ruth is not for sale.”

That didn’t surprise him, but it was worth a try nonetheless.

The bout might have lasted longer, but Ruth risked disengaging to dive for the spear. The whip slithered free of the spear’s shaft, and Ruth flung the barbed missile at Hyperosa, who couldn’t raise her shield high enough to deflect it. The spearpoint embedded into her right shoulder between the fringes.

With a startled outcry, Hyperosa dropped to her knees, releasing her gladius and clawing at the quivering shaft with her left hand. Her face contorted with agony as she ripped the weapon out. Blood gushed from the wound. Ruth wasted no time in claiming victory, grabbing a fistful of her opponent’s flaxen hair and thrusting her gladius under Hyperosa’s chin. In that pose they froze, facing the governor’s box.
“Definitely not for sale,” Jamil stated.

Review for Liberty by Kim Headlee
I keep saying I’m not a fan of ancient & medieval novels, but then authors keep proving me wrong by writing fabulous stories that pull me in and make me cry.

This time the author was Kim Headlee, and the book was Liberty. The time is somewhere between 160-169 AD. This is the story of a young woman named Rhyddes, which means Freedom. But instead of freedom, her horrible father sells her as a slave to Romans. She is bought by Jamil who owns a gladiator school and he trains her to fight.
His friend, Marcus, the son of a governor, who accompanied Jamil to the slave market falls in love with Rhyddes. But she is slave, not a citizen of Rome, so nothing can come of his feelings. Instead a proper young woman with a conniving father is promised to Marcus and Rhyddes, now called Libertas, continues to improve as a female gladiator. But Marcus, remains enchanted with her.

There are a great deal of plots within this story, so you must stay alert.  Marcus’ father wants to get rid of Libertas, convinced she is distracting Marcus from a highly advantageous marriage. Then there is a plot to ruin Jamil who comes to love Rhyddes as a daughter. Then there’s a plot to overthrow the Emperor Marcus Aurelius which when thwarted, enables the impossible to happen. (Nothing like some clever thinking and saving an Emperor’s life.)

The detail and historical accuracy that Kim Headlee has put into this story is phenomenal and not once did it bog the story down, which detail is all too prone to do.  I would have happily read it the book in one sitting except for its very long length and my annoying need to sleep and do other things. But I resented every time I had to stop reading, so I’ve been surly much of this week. The story was fabulous. It becomes poignant near the end when Rhyddes gives up Marcus to his betrothed. That section made me cry. Then amazingly, an HEA appears and made me all happy again.

Without reservation, nothing to be improved, a delight from start to finish, I give this 5 stars.