Today, we have Lynne Barron and her Pretty Poison.

Peep Rep: Since when is poison pretty?

Liza: Since Lynne wrote the book. Now do you want to know about the prize or not?

Liza: Lynne is offering a $25 Gift card (Amazon or B&N) to one lucky person who enters her rafflecopter as long as their name isn't Peep Rep. 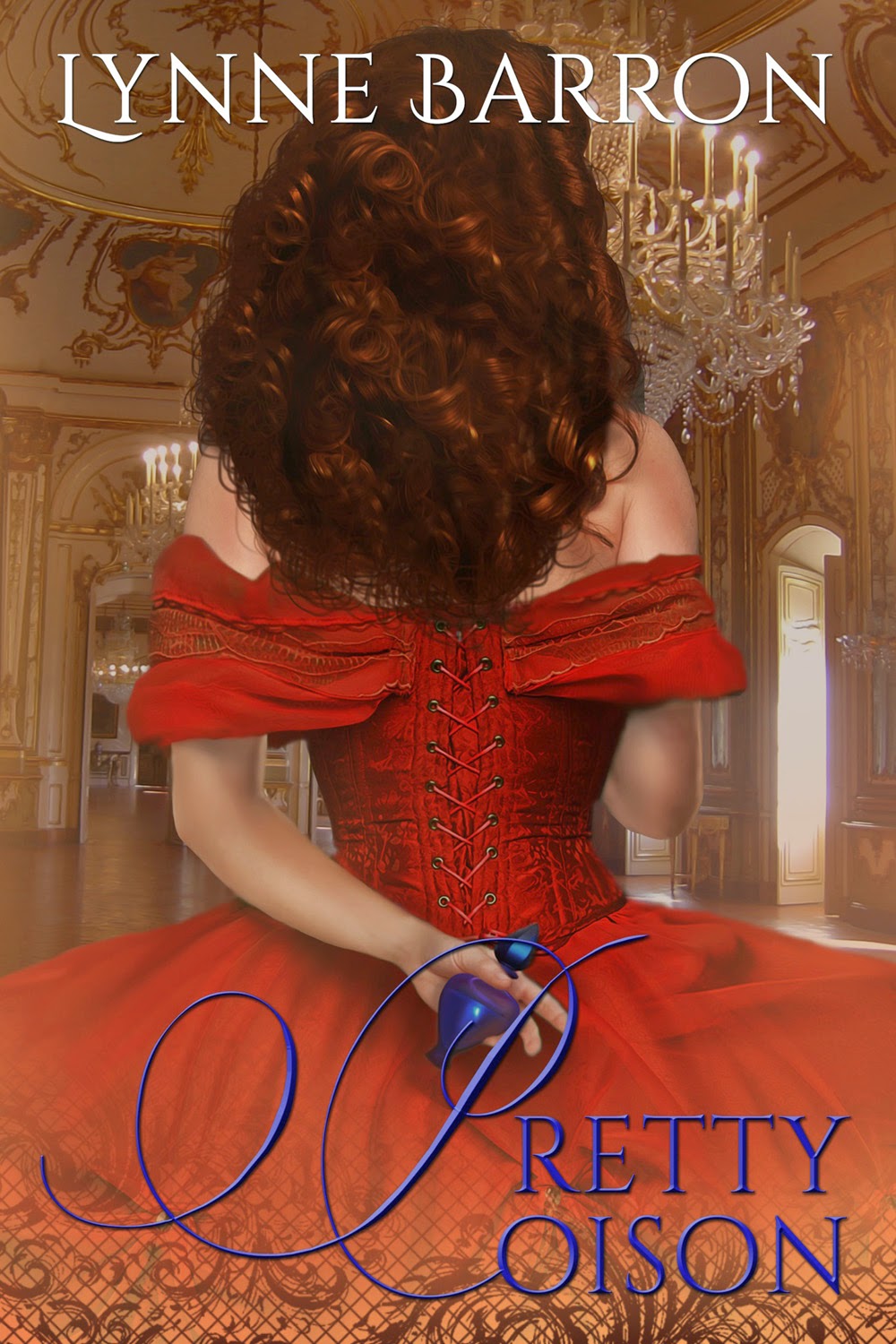 What’s an American heiress to do when a pair of britches, a plunge into a pond in the dead of winter and a broken betrothal force her to set sail across the ocean to an arranged marriage with a fortune hunting Englishman?

With her hopes and dreams sinking to the bottom of the sea like so much lost treasure, Emily Calvert falls into the pretty poison she finds in a little blue bottle.

Can Nicholas Avery, a charming aristocrat with a faulty memory for names and a family in dire need of financial salvation, convince the wounded lady that the blessed oblivion she finds in his arms is sweeter than opium?

Without a word Emily pushed open the carriage door and jumped to the ground, her boots sinking into the muck of the stable yard, her hem trailing along behind her as she turned and marched off toward the small village.

“Miss Emily!” Tilly struggled to catch up to her mistress, her little hands clenched in her skirts to hold them above the mud. “Lord above, what’s come over you, hollering at your father that way?”

“Do not start in on me, Tilly,” Emily warned with a glare over her shoulder. “You’d do well to remember your place.”

“My place?” the girl repeated as she caught up and fell into step beside Emily.

“You are my servant,” Emily answered even as she cringed at the malice dripping from her voice, swirling in her head. She felt mean, mean and nasty and cruel. “We’re in England now, Matilda Calvert. I’m to be a lady now and you had best learn to curb your tongue and behave as a lady’s maid ought to.”

“They’ve likely never seen a dark-skinned girl like you before,” Emily replied. “Drop your skirts, Tilly, you’re showing off your ankles.”

Tilly dutifully complied, her wide eyes taking in the village and the people who’d stopped to stare at them as they passed. “I think it’s you they’re eyeballing.”

“Why on earth would they be looking at me?” Emily demanded.

“I don’t think they’ve ever seen a lady marching down the street with her hair falling from her pins and fire shooting from her eyes,” Tilly answered with a grin.

“Well, let them look,” Emily muttered as she reached up to tuck a wayward curl back into place.

“Where are we going?”

In answer Emily stopped before a little shop wedged between a milliner and a curio shop. The door was painted a bright green and flanked by two large multi-paned windows through which she could see row upon row of bottles stacked on shelves from floor to ceiling. Above the door hung a weathered sign carved with a mortar and pestle.

The proprietor, a stoop-shouldered man with a shiny bald head and trim beard greeted them, his welcoming words tinged with a faint Prussian accent.

Wasting little time on pleasantries, Emily ordered a bottle of the apothecary’s own special recipe of laudanum, one he’d only whipped up that morning.

As she waited, she looked about the long, narrow shop, entranced by the odd assortment of goods stored on the shelves and on tall rotating display cases. The air was redolent with myriad scents, from lavender to ginger, frankincense to eucalyptus, all combining into an exotic, spicy aroma that somehow soothed her frayed nerves, calmed the rapid beat of her heart.

“Oh look at all the pretty little bottles!” Tilly cried from across the room.

Emily joined her before one of the windows where the girl had discovered a display of colored glass bottles of all shapes and sizes. A bright blue bottle with a round base and a long, elegant neck sat on the edge of the shelf. Emily tilted her head to study the bottle that was as pretty and dainty as any porcelain statue that had ever graced her mother’s front parlor. It was shaped almost like a woman, the base the bell of her shirts, the handle a long elegant arm cocked out with hand resting along a trim waist. Deep within the fluted neck sat a stopper decorated with pretty blue, red, and green gems.

“My wife says the ladies prefer their tonics in pretty bottles,” the apothecary said as he joined them. “She thinks it make the taking of them less onerous.”

“I’ll take this one.” Emily lifted the dainty blue bottle, surprised by its near weightlessness. The bottle was only slightly larger than her hand and even lovelier up close. She held it up to the sunlight, amazed by the way it glowed, by the blue beam that shot through the glass to dance along the warped wood floor, as if the little bottle had captured the sunlight and turned it into a moonbeam.

“Shall I fill it for you?” he asked with a nod.

“Thank you,” Emily replied with a trembling smile, her eyes fixed on the package he held out to her in exchange for the blue bottle. The paper-wrapped parcel was heavy enough that Emily suspected the contents would last her to London, would see her cocooned in oblivion through her first meeting with her aunt, through her father’s departure to join up with a group of train-mad gentlemen to tour the country’s fledgling railways, perhaps even through her first introduction to her future husband.

If she was very lucky she might even manage to make it through her first London Season in quiet contentment, might avoid thinking of her future, a future that held no resemblance whatsoever to the one she’d imagined for herself.

“Now mind me, young miss,” the apothecary cautioned as he handed the second, smaller wrapped parcel into her hands. “Every apothecary brews his own variety of laudanum. This here that I’ve given you might be a bit more potent than what you’re familiar with. You be sure to take care with how much you take until you’ve accustomed yourself to it.”

Emily nodded, barely hearing his words as anticipation shivered up her spine, finding a nest at the nape of her neck where it settled like a faint beat, a warm, whispering tingle.

It was an odd sensation, anticipation coupled with a sort of jittery restlessness, and one she would come to both welcome and dread in the months that followed.

Write About What You Know.

Every Creative Writing Teacher and College Professor said these words to Lynne Barron in one form or another. But what did she know?

She knew she enjoyed the guilty pleasure of reading romance novels whenever she could find time between studying, working and raising her son as a single mother.

She knew quite a bit about women's lives in the Regency and Victorian era from years spent bouncing back and forth between European History and English Literature as a major in college.

She knew precious little about romance except to know that it was more than the cliché card and a dozen red roses on Valentine's Day.

Then she met her wonderfully romantic husband and finally she knew.

And she began to write.


DON'T FORGET TO ENTER THE RAFFLECOPTER.