If you enjoy Urban Fantasy, be sure to check out the next book in the Raven Investigation Series.

It's dark. It's gritty. A totally addicting adventure you won't want to miss!

Ancient magic has been unleashed into the world. It’s willing to do anything to survive, even if it means war. Only one woman can kill it…or set it free. 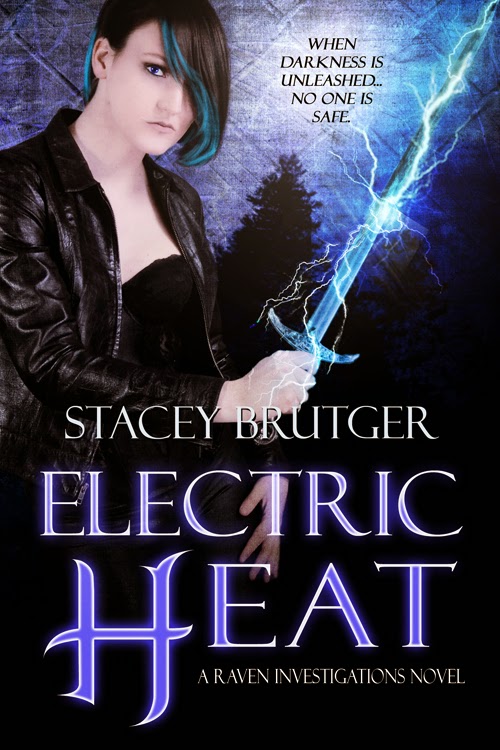 The local witches’ coven offers Raven a trade: Surrender herself to them for one week or give up a member of her pack. She thought they wanted to study her, but Raven discovers something far worse—murder. To save her pack, Raven must make the ultimate sacrifice…her freedom.

Witches are being drained of power and killed using a wild magic that’s been dormant for centuries. Tasked with locating the one responsible for releasing it, Raven soon finds herself the prey rather than the hunter. The more lives the magic claims, the stronger the killer becomes. As she and her pack scramble to unravel the secrets of the coven, her own beast starts to wake, and she’s not sure which is more dangerous…the killer or her beast. But one thing is sure, if the coven and pack don’t learn to work together, none of them will survive the coming storm.

Raven followed Durant’s example and filled her plate. As they walked toward an empty table, she noticed there wasn’t any available space on his dish, the food piled so high it spilled over onto the tray. They barely sat down when a small group of girls walked into the room and grabbed their food.


They giggled, rudely staring at Durant as they neared, then one of the girls stopped, forcing the rest to halt as well.


“He doesn’t belong at the table.” The girl smirked as she removed a bowl from her tray and set it on the floor. “Here, kitty-kitty.”

Raven went taut, ready to lunge across the table. Durant gave a tiny warning shake of his head. He bent, scooped up the bowl and smiled, flashing his fangs. “Thanks.”


A couple of the girls squealed and leapt back, but the one in charge narrowed her eyes at the challenge before she led her small band of stuck-up princesses away.

Raven’s blood boiled at the insult, and she barely resisted following to teach them a lesson. They headed toward a table at the front of the room. As they neared, the occupants scrambled to vacate, but one boy wasn’t fast enough. The leader of the group leaned over and shoved the poor guy’s tray of food to the floor while her friends laughed.

Raven blinked innocently. “Do what?”

The girls were fools if they thought she was helpless. Raven reached for her core before she remembered there was nothing left. The reminder was an annoyance. She might not be able to use her own power, but that didn’t mean she was defenseless. She noted the plug-ins behind the main table, and drew down hard and fast.

Electricity forked through the room, and she directed it toward the lead table.

Sparks arched up the metal legs.

Within seconds, the girls launched to their feet with a collective squeal, rubbing their asses while they scurried away, dumping trays of food over themselves in their haste.

Raven smothered her smile and dropped her gaze to her food. Durant snorted and continued to eat. The room grew eerily quiet. Some of the kids smiled, a few others snickered.

Much to her surprise, the creature gave a snort as well, seemingly to approve of her petty revenge.

The girls marched past them, heads held high, humiliation burning in their cheeks as they headed out the door…all but one.

The lead girl stopped at their table, hatred fizzing around her like the buzz of an annoying insect. “You did this.”

The whole room fell silent, all eyes on them.

“Prove it.” Magic swelled around Raven, the air turning overly sweet until her teeth ached.


“They’re guests of the coven.” A young male, probably just short of graduating, strolled boldly up to their table, tossing an apple in the air before catching it. He was thin, his blond hair short in the back and styled longer in the front. There was something gregarious about the boy that made Raven want to smile and invite him to sit with them. “You’re already pushing the boundaries, Paige.”

The girl spun to face him, wrath darkening her eyes, her long blonde hair whipping out in her agitation. “Mind your own business, wizard.”


“Of course.” He bowed, then his eyes lit with mischief. “You have something on your dress.” Then with a perfectly straight face, he pulled a noodle off her skirt.

A scream of rage escaped behind the girl’s clenched teeth. Magic rippled in the air, knocking the boy on his ass.


Raven shot to her feet, but the girl had already turned, storming across the room toward the door. By the time Raven reached the kid’s side, he was already on his feet, a little wisp of smoke curling up from his chest where the stuck-up princess had struck him with a hex.

Stacey is very shy. So to find out more about her

Go Here to find out more


about the Author
and her Books.

See the giveaway details
at Goodreads.