Rebecca Royce and six other authors bring you a wild party.

Today, I'd like to share with you one of the fabulous authors from Austin Texas who have joined to provide you one hot deal of a book.
She happens to be one of my all time favorite authors,
the prolific and mega-talented
Rebecca Royce.

Excerpt from
No Quitting Allowed by Rebecca Royce

“You’re staring at me.” She set her glass on the bar and it made a large clink.

“You’re beautiful. It’s easy to look at you.”

She waved her hand as if to indicate the room. “Stare at someone else.”

He looked around for no other reason than to appease her. She was a woman who needed a break. How badly did you have to be pushed to shove a bag and your job at your boss?

He caught the gazes of two of his employees. They waved with a lot of gusto. He grinned. They’d be hung over in the morning. It was a good thing he’d given them a few days off to enjoy South by Southwest. Employees weren’t productive when they’d rather be somewhere else.

“Nope,” he turned back to Lana, “I think I’d rather focus all my attention on you.”

“Why? Don’t you want to gaze at Dexter adoringly?”

“Let’s try a new refrain. We’ve had the Dexter back and forth already. I’ve registered it. You hate him. I don’t care one way or another about DBR. I listen to eighties’ punk. How about you?”

She pursed her lips. Whatever she was about to say, he’d wager money she would shout it. He could feel it in his bones. In their short acquaintance, Lana liked to yell. God, she was really going to be an exciting person to know.

So completely impolite on the street—and he had to admit, in the elevator. Yet, when she’d collided with him in her haste to get away from DBR, she’d apologized. Somewhere in all her bluster was a huge heart. He could see her light.

“I enjoy listening to Broadway musicals.” She shouted the fifth word, exactly as he’d known she would. “And any other music found in New York City.”

“Ah, I can feel an Austin dig coming on. And your criticism of my beloved city, I won’t take. Hate DBR all you want. Hate Austin? No, ma’am, no one with a soul can hate my city.”

The full blaze of Lana’s temper turned on him and all straight from her eyes. What did it say about him that he got so fucking hard? Tonight would be an important turning point in his life; he could feel revelations buzzing in his bones. By the end of the evening, he would know himself better.

Life was funny. The universe showed him truths at the most unexpected times. He’d known when he saw her on the street he had to purposely bump into her. She was a woman he needed to become acquainted with.

“Have you ever been to Manhattan?”

“And you wouldn’t rather be there than anywhere else in the universe?”

He threw his head back and laughed. “Right, Lana, baby.” He had to add the last bit to watch her color rise. “I’m right where I want to be.”

Her grin twisted. “Hey, can I ask you a question?”

“Sure.”  Her query would be great, her mind had so far taken her mouth to really unusual statements.

“If any of the bedrooms in here are unoccupied, would you want to fuck me? A really big quasi-anonymous romp in the sheets? Immediately?”

WHERE TO BUY
Amazon | Are | Kobo

Add to Goodreads “Want to Read”

RebeccaRoyce.com | Blog | The Decadent Divas | Facebook | Twitter | Pinterest  | GoodReads | Amazon
And here are the wild seven romances they have combined into one offering.
If that's not enough to get you excited,
check out the $75 gift card going to one of you. 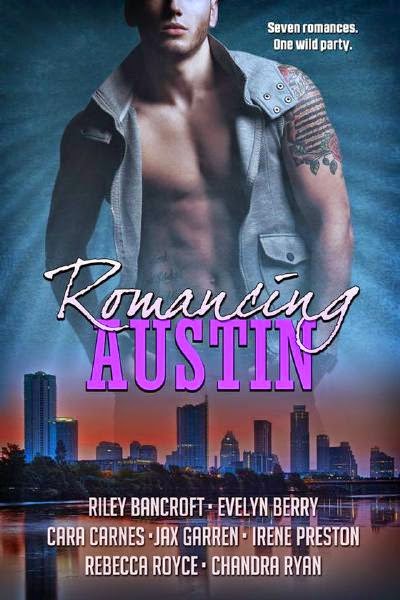 No Quitting Allowed, Rebecca Royce
One last assignment and then Lana is quitting her job, quitting Austin, and moving on with her life. Until Jake stumbles into her and changes the direction of her whole world.

Twisted, Cara Carnes
Caleb "Colt" Douglas agreed to close out Twisted Delirium's sold out world tour with a gig at SXSW for one reason--win back the woman he left behind.

Do Over, Chandra Ryan
When life offers Juliana a fresh start, will she follow her heart or play it safe?

Consortium, Riley Bancroft
Record exec Holt Michaelson married the enigmatic Chloe to keep his assets safe from a vindictive competitor, but after a fiery encounter with his new wife, he's determined to claim her as his own, body and soul.

Tall Order, Irene Preston
Dylan made the worst mistake of his life when he chose his career over Aston, but tonight he'll take a risk on Aston even if it's too late.

Enchanted, Evelyn Berry
Stripped of her magic, fairy princess Aurora is torn between her duty to her imperiled family and to a brilliant musician who holds the key to their freedom...and her heart.

One Night with the Vampire, Jax Garren
Tonight Alex will finally possess the woman he's craved, but Sofia's dangerous family secrets threaten to tear them apart.

Add to Goodreads “Want to Read”

There is also a Rafflecopter giveaway