Today, I have Nikki McCormack on my site with what looks to be a most interesting book. I can't wait to read it!

Peep Rep: Can I read it too?

Liza: Peeps, I haven't seen you forever! Where have you been?

Peep Rep: (shrugs) I got promoted.

Liza: That's great. What do you do now?

Peep Rep: Nothing. Turns out they just wanted my name so they could claim to represent the peeps. So I quit. Can I come back here?

Liza: Of course you can. The book we have today, Forbidden Things: Dissident sounds really good. Would you like to read it first?

Peep Rep: Yes, please.  They didn't allow me to read books at work and I love books.

Liza: Yes, I remember. You love books and money. And guess what? There's a $50 gift card for one lucky commenter.

Liza: And I'll try not to threaten to fire you on every post. Now let's focus on this enticing book.

Peep Rep: Yes, let's do! Oh I love the glowing tattoo. Can I get one?

Liza: Why don't we just admire this one... 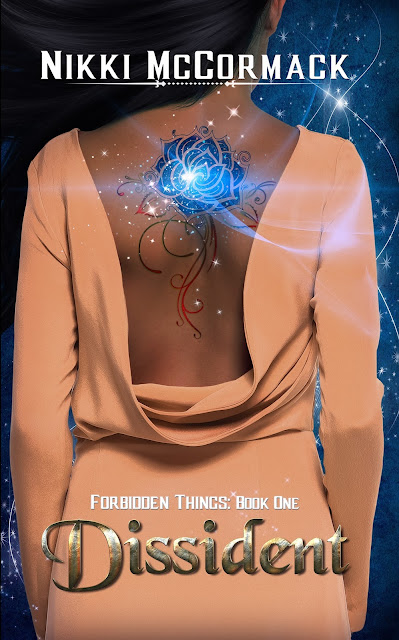 Ascard power can strengthen, heal and create. It also has great potential to destroy, enough to topple entire governments. Indigo’s country places strict limitations on the use of ascard so she must channel her talents into the healing arts or risk severe punishment. An orphan from a disgraced family, trapped by her father’s treason, Indigo struggles to reclaim her place in a society that has driven her into an abusive engagement.

Then a mysterious stranger from a neighboring country contacts her using ascard. He needs help escaping his prison so he can bring an end to his emperor's oppressive rule or die trying. His unshakable devotion to his cause and the passion hidden behind his cool arrogance move her to help him at the risk of being branded a traitor herself.

When the politics of society bring them together a second time, Indigo decides to use her growing powers to help him fight his war. If only she dared fight for her own future with such passion. Perhaps she can find the courage to do so by helping the man she has fallen for win his revolution. She might have exactly the power he needs to succeed.

Indigo stared at the place Eldrian had been seconds ago. With him there, even the beasts couldn’t drive her away. With him gone, icy fingers of dread crept up her spine. She wanted to be anywhere else. In scant seconds, everything changed and all she had left of him were memories and a pair of boots.

Looking at the oversized boots, she grinned. Though she barely knew him, something about him fit her. His arms felt like home more than any place she had ever been. Jayce would be a poor substitute for this exotic man who made her feel so wanted and alive. Such was the price she would pay for her father’s treason.

She stepped closer to the pillars, pulse racing, but the shimmer was gone. He was gone and she couldn’t follow. In that instant, she would abandon everything to go after him. Placing a hand on either side of one pillar, she closed her eyes and pressed her forehead against rough gray stone. If only…

The sound of movement behind her shattered her musings like so much fragile glass. Her heart bounded into her throat. She spun. A hound ambled into the canyon. She looked into its sightless eyes and recognized death in them.

The Good: The book is well written and compels you to keep reading to the very end. The characters are interesting, the plot well-constructed, and if you love battles, you’ll be in catnip heaven.

The Confusing: The book has a large cast of characters with odd names. For me, this caused confusion at the first as I constantly pondered who a person was. However, before I was halfway through, I had the characters sorted out.

The Not for me: While there are some very fine romantic scenes between Indigo and Yiloch, there are far more battle scenes.  Sadly, I don’t like battles, especially if nice people die, which happens in this story. But I will say the battle scenes were very well conceived and written, both in clarity of events and in progressing the story.

There’s also betrayals galore, powers that can kill, and marriages that should never be, while others cannot be. In other words, for a 'fantasy' it’s highly complicated and reads like a real world.

So, I’m left with a quandary. Do I judge it on what I wanted it to be or judge it for what it is.

Fairness to the author says I should judge it on what it is.  Thus, I give it 5 stars for being a well written book, but then petulant Liza deducts .5 points for killing off someone I liked, and not giving me the HEA I wanted.

However, since Amazon doesn’t accept half points, I’ll round it back up to 5.0 which is what it technically deserves.

Oh and if any movie producers are reading my blog today, this would make a really great movie, but please red shirt those about to die! 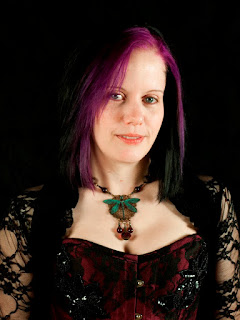 Nikki started writing her first novel at the age of 12 (which is still tucked away in a briefcase in her office). Despite a successful short story publication with Cricket Magazine in 2007, she treated her writing addiction as a hobby until a drop in the economy left her with an abundance of free time to focus on making it her career.

Nikki lives in the magnificent Pacific Northwest tending to her awesome husband, two sweet horses, three manipulative cats, and a crazy dog. She’s a wine and tea fanatic who loves sitting on the ocean in her kayak surrounded by open water or hanging from a rope in a cave, embraced by darkness and the sound of dripping water. She also enjoys horseback riding, archery, PC gaming, dancing, good anime, etc. She studies Japanese and practices Iaido because she believes we should never stop learning.


The author will award a $50 Amazon/BN GC to one randomly chosen winner via rafflecopter during the tour.
a Rafflecopter giveaway