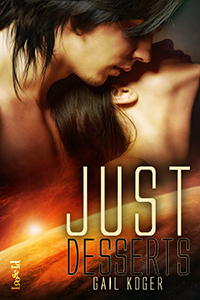 Kaylee knew being a Coletti Warlord's mate wasn't going to be easy. Not only was Talree downright scary, he had a bossy streak a mile long and collected enemies like most men collected lovers. But while Kaylee's life might not be perfect, Talree truly loved her.

Flash forward nine months to a very pregnant, insanely hormonal and cranky as hell Kaylee. If the pregnancy wasn't enough to drive her crazy, Talree's enemies are tap dancing on her last nerve. The Shani Queen Mother, a psychotic alien with a bone to grind against Talree, decided she wanted the planet Tartum - a barren piece of crap loaded with Ditrum crystals, and part of the Coletti Empire. Her master plan? Kidnap Kaylee and hold her for ransom. If the Overlord refused to give the Queen Mother Tartum, she would feed Kaylee and her son to the Tai-Kok.

She thinks Kaylee will beg for mercy. Boy, is the alien bitch in for a surprise. She's about to meet a woman suffering from hormone overload and a serious lack of chocolate. The only one begging for mercy will be the Queen Mother.

Talree’s nimble fingers made short work of my shirt and bra. His hands roved over me with a wild hunger.

“Can’t we talk about this?” His sharp teeth scored my nipples, and I fought to squelch a whimper as he created an exquisite torment almost too much to bear.

The fog of arousal intensified. Later? “But -”

Talree dropped his shields, and I felt his beast. Its horrific rage beat at me. It was so hungry. Its need to kill was overwhelming. There would be no mercy. The beast would eat anything in its path. Including me.

“You are my anchor. Deny me, and I become an unstoppable monster.”

A cold fear lodged in my stomach. Talree was very close to breaking. The beast had to be defeated now, or it would travel back to Earth and do what the Tai-Kok hadn’t yet accomplished. Kill every living soul. I couldn’t let that happen. I was a Siren, and it was my job to protect Earth no matter what the cost. Talree was already embedded in my head, and I wasn’t sure
I could live without him. Talk about a rock and a hard place.

I took a deep breath and sealed my fate. “I accept your claim.”

A triumphant roar echoed around the cabin. Talree pushed me to the floor and ravished my mouth with hot kisses.

“I will kill anyone who tries to take you from me,” Talree rumbled in my head.

Yikes. “Easy, big guy. I’m not going anywhere.” Hopefully, it was the beast talking. Time to get the show on the road before it broke loose. Since my only sexual experience was some heavy petting in the backseat of a car, I went with what I had read in romance novels.

I trailed my fingers down his stomach and felt a slit in his abdomen. Well , that was kind of freaky. I twisted around for a better look, and my eyes bugged when I saw his man-part slide out. That gargantuan monster was never going to fit, and holy hell! “Ah, excuse me, but are those tentacles?”

JUST DESSERTS GIVEAWAY: Want to win a 'Man parts' lipstick? Visit my website - www.gailkoger.com - and tell me the name of my current project and send me the information in a email to gkoger58@q.com. Put Just Desserts in the subject field. Easy, huh?

I was a 9-1-1 dispatcher for thirty-one years and to keep insanity at bay, I took up writing. Not to worry. The insanity isn’t catching – much. Other than the addiction to chocolate and the twitch in my left eye, I’m good. Next up in the Coletti Warlord series is Wulf and the Bounty Hunter.