Today, I review the talented Cd Brennan's new novel, In Touch. It's about an Irish Rugby Player who hides out in the states after he's caught abusing Oxycontin and is tossed from the European league.

First confession: Before writing this review, I did some research first. All my new found knowledge about rugby is from  http://www.whatisrugby.com/rugby-basics/rubgy-overview/

Rugby is a free-flowing game that features a combination of strength, speed and strategy to move a ball into the opponents territory. It's a full-contact sport, yet players wear little-or no protective gear. It evolved from soccer and is often called the ‘game played in heaven’, which given the lack of protective gear, I’m not surprised players incur sufficient injuries to be sent to heaven.

They don’t mention the shape of the ball on the site.
While logic would suggest that it would be like a soccer ball, I don’t trust logic when discussing sports. And I was wise to look it up. A rugby ball looks like the illegitimate ball born from a soccer and football. It’s the shape of a giant egg.

Padraig is holding a rugby easter egg (ball) on the cover below.

There are four ways to score points:
The Try: Place the ball on the ground in the enemies' end zone. (5 points)

The Conversion, after the Try succeeds: Kick ball through uprights (2 points)

The Drop Goal: Kick ball through the uprights anytime during play (3 points)

The Penalty: From the point of infraction, try to kick the ball through the opponent’s uprights.

I’m thinking that infractions occur most often in plays when a penalty will be too far away from the infracter’s (I just made that word up) uprights.

That’s all the education you’ll get from me:


No protection, egg shaped ball, a mix of rules so you’ll be confused if you are a fan of either soccer & American football. So let the games begin...

And no, you don't need to know any of that to enjoy the story. I'm just a curious person who likes to share.
LOVE THE COVER! 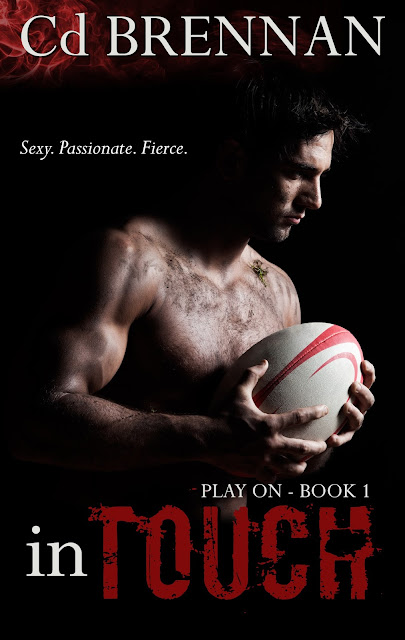 Seriously, the ball looks like a giant egg, doesn't it?

Sexy. Passionate. Fierce.
Irish rugby star, Padraig O’Neale, has fecked up his life and is one angry man. When caught using a banned substance for his back pain, Padraig is excused from both his provincial club and the Irish International team. Right before World Cup selection. Out of choices, his agent convinces Padraig to play for a small American club in Michigan. Just until things settle down. But when Coach asks the team physical therapist, Gillian Sommersby, to help the newest Blues player with his issues, Padraig finds himself trying every wacky treatment out there from stinky salves to music to yoga. Like her therapies, the therapist herself is a bit…odd. The cute college grad in Converse and glasses doesn’t seem all that impressed with Padraig’s celebrity status, nor gives a shite about his excuses. As it turns out, she might be exactly what he needs…

She hadn’t heard Padraig approach, so when he sat down next to her on the top step, she jerked up to sitting, her hand stilling a heart that wanted to make a break out of the gates.
He wore his tracksuit pants and a T-shirt with bare feet and rumpled hair. “Are you okay?”
She brushed her face with the corner of the quilt. “Ah yeah, just couldn’t sleep. I didn’t mean to wake you.”
“You didn’t. I haven’t been sleeping well the last few nights, anyway.”
Their seclusion here in the woods, the surrounding darkness as black as ink, gave Gillian the courage to ask, “We’re probably not at the right time for each other, are we?”
“Honestly, I’m not sure, but you’ve done more for me in the time I’ve been here than anyone has in my life.”
“All that means is I’m a super-sap.”
He chuckled. “You’re one of the most wonderful people I’ve ever met.”
“Oh shit, this sounds like the beginning of the talk.”
“What talk is that?”
“Don’t. You know what I mean.”
“You told me once you don’t like head games and I’m telling you honestly. You are better than any other woman I’ve met, and there have been loads.”
“That makes me feel a heap better. So it’s not just sex?”
“Fantastic sex.”
“Yes, fantastic sex, but you’re, you’re…a testosterone turd.”
“Wait a tick, that sounds naff.”
“It does, doesn’t it? Sorry, it’s what I used to call my brother and his friends.”
“I don’t get that about Americans. You guys categorize everything, put everyone in little boxes with labels, compartmentalize. We don’t really do that in Ireland. And Jaysus, we’re adults. Too old for that shite.”
“You’re so right.”
“And you’re just you, Gill, sexy as fuck, funny, smart. All the Blues think you’re class. You could have picked any of ’em. Why me? It’s not like I was much of a gentleman a few weeks ago.”
“It was the accent.”
“Thanks for being honest.”
She laughed, but it died at her next thought. “When are you leaving?”
“Honestly, I don’t know. I haven’t heard anything from my agent, and I haven’t a clue what else to do.”
“You could stay here.”
He turned, and even though the darkness cloaked his eyes, she had penetrated where she’d wanted the thought to go.
“I could.”
She had nothing further to say so she laid her head on his shoulder. “Are you cold? I’d offer to share, but I’m naked as a jaybird underneath.”
He wrapped his right arm around her and drew her close, both of them shuffling together in an awkward moment. “Nah, this is just a summer day in Ireland.”
“Do you miss it?”
“Not right now.”
“What about tomorrow?”
“Will you be here?”
She smiled, scuffing her foot across the worn step, pushing flecks of old paint over the edge. “I will.”
“Then I won’t miss it.”
His words warmed her through, and she bit her lip in happiness. She didn’t know what to say in return, so asked, “How are you feeling?”
He nodded, taking a small stone from the step and chucking it into the woods. “Anxious. Tense. I want the meds.”
“You will for a while, I hear. You might crave it for days, even months from now.”
“Will you be here?”
She wanted to laugh, but couldn’t. “I will.”
He kissed her on the head. “Hey, you’re not such a bad trumpet player.”
She laughed then. “Thanks.”

First, let me thank Cd for giving me a whole new vocabulary of Irish curse words.  I'm sure it will come in handy one day.

Now to my review:

Allow me to confess, I have never seen a game of rugby, unless the game I saw in Australia was rugby. That’s not what the guys called it. They called in Australian football, but they loved to mislead the silly American, so I never knew what to believe.

What I really liked about the book:
I did not require knowledge of rugby to enjoy this story. Cd Brennan is an amazing author. You will never find a moment of confusion in her work. Everything is superbly written, clear and detailed. She takes her time to develop the main characters, Padraig and Gillian, and the romance between them.

You might not always like Padraig, but you will root for him all the same, because like Gillian, you’ll sense his potential and won’t give up on him.

Gillian, you’ll love at once. At least I did. From the moment the book begins with her stealing her parent’s medicines so they’ll try her alternative healthy solutions, I adored her. She’s an educated physical therapist with a great knowledge of alternatives to conventional drugs.

She is exactly what Padraig needs. He’s been kicked out of Europe for his addiction to Oxycodone. If there is anyone who can save him and his career, it’s Gillian. Unfortunately, addictive drugs are not easy to give up, which makes their romance difficult.

Can Gillian love a man who’s addicted to pain killers? Who appears to be everything she’s against? Who has a trigger temper due to his addiction? Sorry, I’m under a gag order not to reveal the answers to those questions.

The only thing I didn’t like:
While Padriag’s journey was very real, at times, I did not like him. He is close to the line of no return with his drugs. Soon his career and life will be destroyed and he’ll take down anyone who loves him, but he refuses to see that, even when Gillian tries to pull him back from the edge. The character is so well written, so three dimensional, that the probability of success is slim.

Be warned, the story unfolds at its own pace. It’s not high drama and action. If that’s what you are looking for, this is not the book for you. It’s far more like real life. With every page the characters will deepen and the story unfolds authentically.

When you finish, the story will stay with you, almost like a real event in your life, rather than a book you read.

Having traveled and lived all over the world, Cd Brennan now enjoys reliving her glory days by writing about them. Feisty heroines with wanderlust or sexy rugby heroes who breathe passion for more than just the sport.

Aussie/Yankee twined, Cd is now settled in Michigan with a rugby player of her own and two wee sons who are still adapting to the snow. A full-time editor and mum, her and her hubby still dream of starting up a buffalo farm. And maybe some chickens and pigs, too. She loves rugby, traveling, and all things from the 80s.
Doesn’t watch TV so don’t chat to her about that, but she loves to hear from readers about anything else! Perhaps some cooking suggestions? She’s desperate in the kitchen! Find her on loads of your favorite places.

As part of the release of my rugby sports romance, I'm running a rafflecopter competition for a great bit of swag!

Each entry for a newsletter signup and every correct guess for the tournament winner will go into the draw. Winner chosen by Random.org after the tournament final on Saturday, October 31st.

TEAM Choices (Who ya think is gonna win? :-)