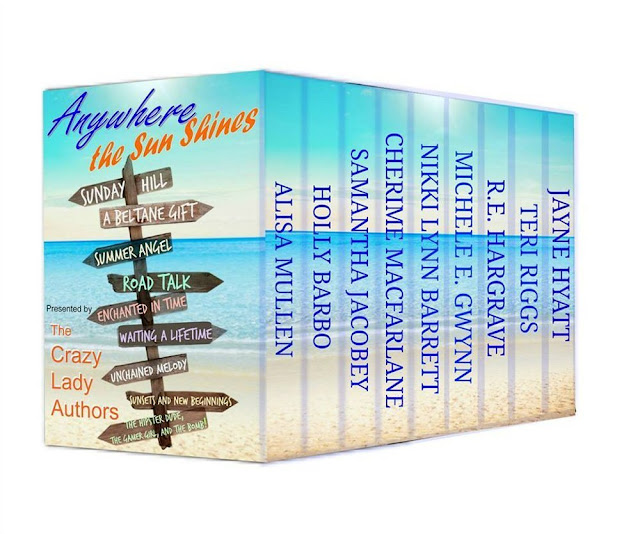 Presented by the Crazy Lady Authors, this box set of NINE incredible short stories is sure to take you on an adventure. Whether you have an hour or a whole afternoon, crack open this set and escape to someplace new. Contemporary and Paranormal Romance, Suspense, Action, and Drama . . . Anywhere the Sun Shines has it all. Fits conveniently in your travel bag; pairs well with poolside relaxation. Serve with tropical, fruity beverages containing bright pink mini-umbrellas and perhaps a box of tissues. Happy reading!

Still reeling from a tragedy, Roxanne Ferris takes a summer job as a caregiver to bestselling author Claudette Grayson. The ailing woman doesn't have long to live, but wants to spend the rest of her days in the house she's fond of.
Roxanne and Claudette bond over enchanting stories of fictional characters that feel so real. It's the perfect escape for both women who carry haunting memories. But when mysterious things happen, Roxanne questions her sanity, especially when she begins seeing one of the fictitious characters in the house.
Who is the mysterious stranger? What's his story? This summer could go one way or the other- bringing peace and closure, or destroying what's left of two women's tormented minds.

A prequel to 77 Steps, Sunday Hill introduces you to Keely Milliken, an aspiring scientist, works hard at her school work and never notices that there is an outside world. As well as Rory McCary, an aspiring professional snowboarder, whose world has been so busy that he never let anyone into his heart.

A Beltane Gift by Holly Barbo
Summer in Scotland, and Mari is working on an archeological dig of a Viking burial ship during Beltane, a time of the year when the veil shrouding the spirit world thins. What could possibly go wrong?
Like the story? Holly is working on further adventures for Mari and her friends in an upcoming series.

Summer Angel by Samantha Jacobey
What would you do if you discovered Guardian Angels are real?
Charlie and his parents had planned a fabulous summer vacation; the last one before he heads off to college. Things go mysteriously awry when the young man meets Clarisse; he finds himself separated from his parents and on a different sort of holiday.
Caught up in a strange adventure with the slender blonde, Charlie learns right away that things are not what they seem. She easily convinces him that her magical powers are real, and introduces him to a world mankind has only dreamt of. Promising to have him reunited with his family soon, the girl takes him on a gallery walk of life, using her abilities to give him a summer vacation he will never forget... and then again, may not even survive.

Road Talk by Cherime MacFarlane
Molly only takes chances while driving. Life burned her and she isn’t ready to open herself up to being wounded again. Louis, Lou for short, knows more about the woman than she cares for. It’s a business trip into the wilds of Alaska. Where will their road talk take them?
Short Bio:I am an Alaskan woman and very proud to be one. I didn’t get here easily but the journey was interesting. The things I write about I have done. Although born in New Orleans, I have lived here since 1977. I have seen -40 degrees, hauled water, made bear bacon and I live in a cabin. I have used a fishwheel to catch salmon coming up the Copper River. I was my second husband's chief mechanic's helper and roadie.

Waiting a Lifetime by Michele E. Gwynn
Wade Walker had his whole life planned out. He was going to earn his law degree, marry his high school sweetheart Arlene Richards, and live the perfect life. But life doesn't always go according to plan. Betrayal was about to derail Wade's well-laid plans, and he would soon discover that he'd been on autopilot heading in the wrong direction. Melissa Ryan had never been in love. A car accident that robbed her of the full use of her legs as a child left the grown woman too shy to even try and date. Melissa spent her time building up her photography business, but despite all her efforts to avoid men, one found his way to her front door anyway. Wade knew his buddy Jed's sister was shy. Hell, she ran to her room every time he came over. He'd barely gotten a look at her, but when she finally wandered into Pelican's Market, the opportunity to say hello presented itself, and he took full advantage. There was something pretty special about this quiet girl, and even her crutches couldn't take away from the fact that she was simply beautiful. For the first time in years, Wade felt alive. Melissa brought out the best in him, and he proved to her that she was a desirable woman. Their love was destined, yet his ex-fiancé couldn't let go. And one stormy night set actions into motion that would have devastating consequences. Wade knew he found the love of his life, but would it be this life or the next before they could be together?

Unchained Melody by R.E. Hargrave
Marshall Chandler is a true American who grew up wanting nothing more than to serve his country to the best of his ability, by becoming a fighter pilot in the United States Air Force. On the eve of his first assignment, he meets the woman that will haunt his dreams and change his life.
A single night to connect, but a decade to realize it . . . when one man is torn between the love of his country and what might have been the love of his life, how does he stay sane? How does he cope? And will he ever get a second chance at love?
Sometimes fate works in mysterious ways.

Sunsets and New Beginnings by Teri Riggs
Mandi Waters had the worst day ever. She lost her job, found her fiancé in bed with her best friend, then discovered he’d been stealing from her. She seeks refuge with her beloved aunt in the peaceful seaside town of Heaven’s Beach. Her ability to trust may be in tatters, but the handsome businessman with the surfer boy looks, might have her reconsidering.
Josh Foster’s mother has her greedy eyes on the only waterfront property left in Heaven’s Beach. Unfortunately, it belongs to a woman unwilling to sell. Her solution is simple: coerce Josh into seducing the owner’s niece, in hopes she’ll sell. However, Josh will never get involved in the same kind of sordid relationships his mother had. Especially when he meets Mandi. She's the kind of woman he could love--until he discovers Mandi is the prey his mother means to trap in her tangled web of deception.
Mandi and Josh have both sworn off love. But if they will let it, the magic of Heaven’s Beach may help them find a way to let the sun set on the past and together discover a new beginning.

The Hipster Dude, The Gamer Girl, and the BOMB! by Jayne Hyatt
On a hot summer day in downtown Denver a bomb threat is made against the public library. Neil and Evie, strangers to one another, are evacuated and detained by police while authorities search for the bomb … and the bomber. Thrown together in a frightening situation, Evie and Neil can’t figure out if they should trust one another - much less like one another – until the crisis reaches its climax, and their dilemma is resolved in a way that surprises them both.

MoB
magicofbookspromo@gmail.com
Posted by Liza O'Connor at 12:00 AM