Liza reviews Shadow in the Smoke by Jo A. Hiestand

Today, we have Jo A. Hiestand and her mystery:
Shadow in the Smoke

Jo  will award a McLaren-design tote bag AND a choice of a water bottle (McLaren designed) or a ceramic McLaren coaster tile (International giveaway) to a randomly drawn winner via rafflecopter. 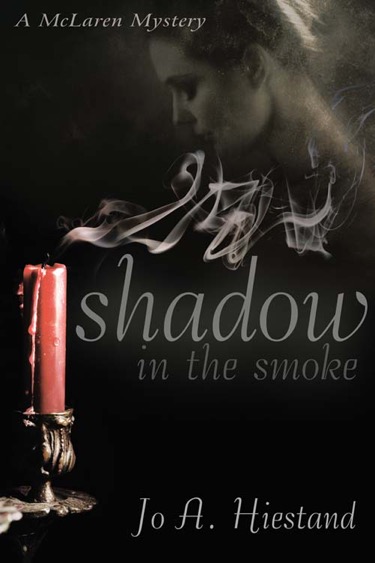 SHADOW IN THE SMOKE
by Jo A. Hiestand

Janet Ennis tragically died five years ago in what the police labeled an accidental fire. But Janet’s mother, Nora, believes it to be murder and arson. And she’s hoping ex-cop Michael McLaren can prove it quickly, for she’s losing her memory to dementia.As McLaren pokes through the case details, he becomes emotionally involved with the dead woman. Yet, Janet isn’t the only person who threatens mental well-being. A series of arsons on his own property hint that he’s upset someone connected with this case.

Motives for Janet’s murder rise like the smoky tendrils of a fire. And, motive aside, the murder scene seems a bit too pat: a drought-stricken landscape eager to lap up flames, and a conveniently locked door barring Janet’s escape.

Will McLaren solve the case while Nora can still comprehend the resolution, or will Harvester’s plans see McLaren’s career go up in smoke?

“I’m sorry, Mrs. Ennis, but even if I did take on your case, I don’t think you could afford my fee.”

He named his price, watching her intently.  She didn’t flinch at the amount but said, “I’d double that if you could find Janet’s killer.”

His right eyebrow rose in skepticism and as he opened his mouth to reply, she added, “I’m serious.  I’ve got the money.”

“It means that much to you, then.”

“Oh, I’m not referring to the money, Mr. McLaren, though I suppose that will be welcome.”

“I meant coming up against your nemesis again and proving him wrong after all these years.”

“Yes. The man you tangled with, the man who’s responsible for you leaving your police job last year. Charlie Harvester. ”

First, let me begin with the positives: I loved the peculiarities about the main characters. The mother, Nora Ennis, has lost everything in her life, including her daughter, Janet, and is now losing her health and mind as well. She may not know what day it is, but she is willing to pay whatever is necessary to find her daughter’s murderer.

Then there is the former cop she asks for help when the officer in charge once again refuses to consider the possibility that this might not have been an accident. The mother is relentless. It’s been five years since she lost her daughter in a supposed accident. And every year she asks for the case to be reopened.  Despite her dementia, she can be quite clever. After being sent away by the police, she goes to possibly the only man who would be willing to take on the case and solve the crime.

Former police officer Michael McLaren has a major grudge against Harvester, the officer who refuses to reopen Janet’s case. He holds the officer responsible for his firing. So even when the woman admits her dementia and Parkinson disease, after a moment’s pause, he takes the case.

Author Jo Hiestand allows a great many characters to have the POV in their chapters, which, in my opinion improved the telling immensely. For example, instead of guessing what Harvester feels about McLaren taking this case, we get to hear his thoughts.

Be warned: rather like real police work, the pace is slow as McLaren bullies, cajoles, or interviews people during in his search of the truth, but I never lost interest.

Nor did I have a clue who had murdered Janet…if anyone had. However, the lives of all those people got more interesting as we learned the truth about them. No one was as pristine as he or she claimed.

Now let me discuss in broad sweeping terms (so I don’t give away anything) what I didn’t like: For me there were too many characters (20) and I was let down by the resolution. Sadly, I can’t tell you why or I could ruin the book for you, and I do not wish to do that, for it’s a very fine book: well written and well researched. So I do recommend you read it.

I simply prefer a faster pace and fewer people. Also, I expect enough clues to have been dropped that I can tag the killer before the book is half-through. I usually can, but not with this one. Until the moment of reveal, I had no bloody clue who did it.

I give this 4 stars.

Jo A. Hiestand knew in grade school that she wanted to be a mystery writer.  But life got in the way: singing in a semi-pro folk group, traveling to New Zealand, working as a camp counselor, co-inventing P.I.R.A.T.E.S. (a mystery-solving treasure-hunting game), becoming a tour agent for a Scottish folk singing group, attending a citizen police academy and riding along with police officers…  But she needed to immerse herself in All Things British for her books.   England beckoned and she responded.

She bee-lined to Derbyshire, feeling it was the ‘home’ of her books.  Derbyshire also bestowed the essential English police contacts and transformed the St. Louisan into an Anglophile.

In 1999 Jo returned to Webster University to major in English.  She graduated in 2001 with a BA degree and departmental honors.

Jo A. Hiestand will award a McLaren-design tote bag AND a choice of a water bottle (McLaren designed) or a ceramic McLaren coaster tile (International giveaway) to a randomly drawn winner via rafflecopter.

Email ThisBlogThis!Share to TwitterShare to FacebookShare to Pinterest
Labels: British Mystery, Jo A. Hiestand, Liza Reviews, Shadow in the Smoke