A Muddle Past Holds No Certainty


The powers that Victoria lost were never regained by any king or queen since, and in my opinion, that is a good thing. For mad or not, power corrupts, and absolute power corrupts absolutely. I'll take a Parliament or Democracy over a Monarchy any day. 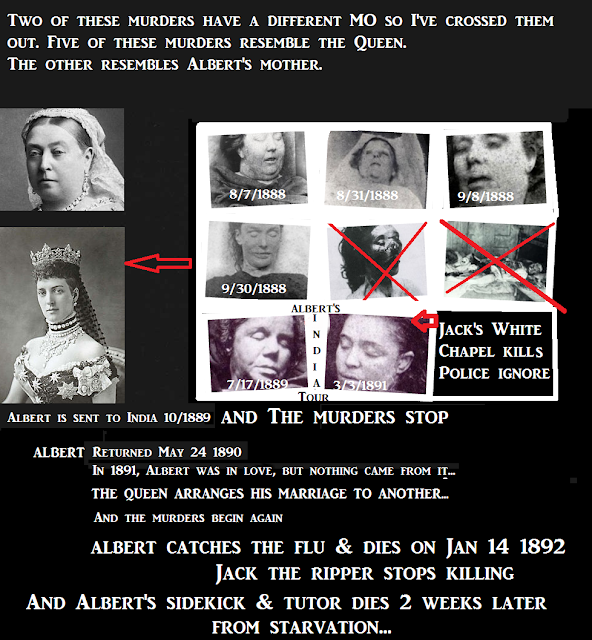 Nothing I've stated proves Albert was Jack the Ripper.
However, using logical deduction, I find the possibility compelling.
There are dates in schedules kept by the Queen that prove Albert was not in town at the time of some of the murders. Once such date if for a murder that shows no resemblance to Jack the Ripper. The other three dates are close to the end or beginning of the dates written in the schedules. They could have easily have been altered when they needed an extra day to hide the truth, so I've ignored it as unreliable evidence.

However, if my conjectures are right, then this had to be one of the most massive coverups ever, where over five hundred people were identified as the possible killer to keep anyone from focusing on Albert.

A second serial killer's work was declared the work of Jack the Ripper in an effort to muddy the water (It was not the same M.O. and Scotland Yard should have known that, even back then.) To be honest, they appear to have thrown any woman who died into the mix to help muddy the water.

Evidence was lost or not preserved at all. Witness statements were never taken. Schedules of the Queen could have been modified, and friends of the Queen might have lied when they swore Albert had been visiting them when the murders occurred.
So, in the end I focused on a few compelling items:
When Albert left the country, Jack the Ripper stopped killing.
When Albert returned and his love marriage didn't happen, the murders began again.
The murdered victims resembled the queen except for one that resembled Albert's mother.
When Albert died, the new murders stopped.
Albert's tutor starves to death two weeks later.

Do I think Albert died of the flu? Not at all. I think the Queen, realizing there was no other way to stop her grandson, ordered his death. And for the tutor's part in these horrors, the fellow suffered a slower, torturous death.
And those in the Parliament, who knew the truth, secured Queen Victoria's last vestiges of power and England moved to parliamentry rule for the better of all.
But here's the very strange thing:
There continues, to this day, efforts to further muddy the waters (such as the DNA of the barber found on one of the murdered prostitutes clothes which proves nothing but the woman serviced her clients). The DNA fiasco had an 'expert' giving lectures and sharing on twitter that finally the matter was resolved.

Given a three year old child could see the DNA evidence wasn't proof of anything, you have to ask who would work so hard to muddy the waters further over something that happened over a hundred years ago.

Another present day muddying the water efforts, there is a website that presents all known probable killers, ranking over half of them far more likely than Albert. Yet, the 'evidence' is weak at best in these others cases, while I believe the evidence against Albert is compelling. So how did so many get ranked so much higher than Albert? Not by honest evaluation of verifiable facts, that is for sure.
I can only think of two entities that would try to silence this puzzle once and for all a hundred years after the event. The British Royalty or the Parliament. But sadly, their efforts only make me more certain that Albert was indeed Jack the Ripper. 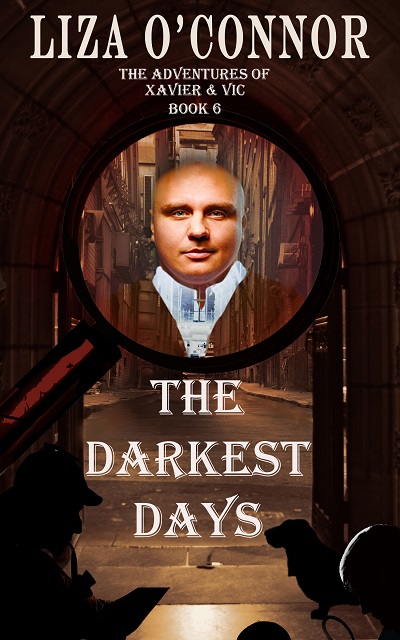 The Darkest Days
by
Liza O'Connor
When the pot has too many cooks a feast can be ruined, and that’s exactly what happens with Xavier and Vic’s new cases. Each proves more complicated than initially thought with criminals dropping out of the sky, wreaking havoc upon Xavier, Vic, and their excellent employees. By the end, Vic threatens to open a school that teaches criminals how to stay out of each other’s way.

Worse yet, a treasured member of the staff is shot in the heart while attempting to save Vic and the Queen’s cousin.

Email ThisBlogThis!Share to TwitterShare to FacebookShare to Pinterest
Labels: Jack the Ripper, Muddled Past