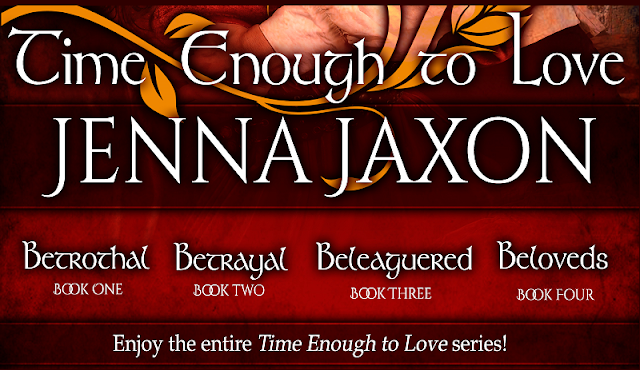 Welcome to the Wonderful World of Jenna Jaxon!
Today, Liza is sharing part's of her reviews of this series and the final excerpt. Being profilic with words, she provides only the best of each review here:


Jenna doesn't just tell you about the past, she entrenches you into the middle ages. You'll feel you are there with them, in their hearts and minds. Every scene and word rings authentic. She makes you believe in a young maiden's ability to truly love a man she barely knows and a seasoned warrior's intense desire to protect and love his young maiden. Their feelings ring true from beginning to end and constantly pulls the reader forward.


Jenna Jaxon has written a fabulous series, but I am declaring it one outstanding epic tale that MUST be read in sequence. This is no hardship, since each of the three books are superb.

In some ways, this book is like Gone With the Wind, except:


1. the heroine is much nicer,


2. there are only two key men vying for her love, and


3. instead of a Civil War, the black plague kills half the people.


4. Oh and there is a happy ending, which did not happen in Gone With The Wind.


So I declare this series far better than GWTW. 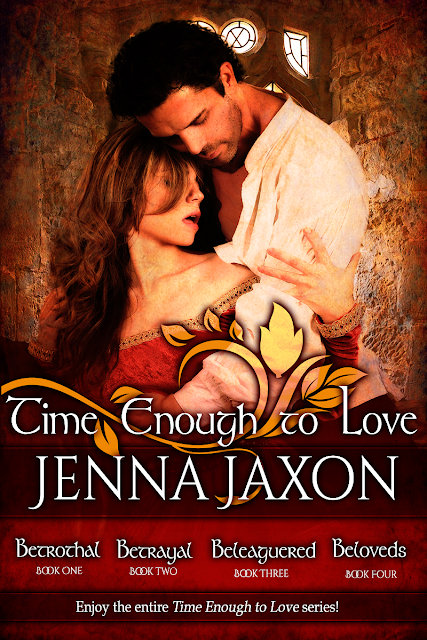 TIME ENOUGH TO LOVE EXCERPT 3
Geoffrey hurried on with a suggestion. “’Twould be the work of a few moments for me to teach it you, my lady.”
It would have to serve. She shot a look over her shoulder at her husband, who nodded and laughed with the princess though his eyes were trained on her. Best get on with it then. The sooner ’twas done, the better.
“Your skill at dancing is such that you would certainly learn the steps with but slight instruction from me.” Geoffrey leaned so close his voice, against her ear made her jump and recall herself. She stepped back and looked at him.
His practiced courtier’s smile flickered at her, and she caught something deeper shining in his eyes that she fought not to see. Her heart stuttered a beat.Her body flushed with the anticipation of dancing with him again even as misgivings swirled in her mind. No good would come of this dance, but Thomas watched closely to see that she acted cordially to Geoffrey. Would that it was an act.
With a sense of heavy foreboding, she extended her hand to him. “Very well, Sir Geoffrey. What must I do first?”
He placed her hand atop his arm and led her to their place in the circle of dancers then grasped her hand to pull her around to face him.
The moment his hand touched her skin, a streak of fire shot through her. Her mouth went dry, and her gaze flew to his face. Surely he felt that as well?
He stared back, his eyes mirroring all too clearly the blaze that coursed up her arm.
Damn Geoffrey Longford.
In a daze, she looked around at the other dancers, expecting them to stare accusingly at her. As if they could see this sinful feeling that tore at her soul. At a loss for how to act, she raised her gaze to beseech Geoffrey. “What do we do now?”
’Twas an apt question for, God forgive her, at the touch of Geoffrey’s hand, all thought of her husband had fled. She was back on the deck of the Phillipa, facing him once more. Loving him once more.
Geoffrey cleared his throat, his face flushed, and said simply, “Follow me.”
Then they were twirling around the circle, hands clasped, arms touching intimately, He seemed to brand her wherever he touched. The figure reversed, and her other side was scorched as if a red-hot blade seared her. Her gaze locked onto Geoffrey’s, and the music, the dancers, the Great Hall and all its inhabitants melted away until all that was left was the whisper of his breath in her ear and the heat of his body pressed close against her.
He leaned in closer to whisper, “I must lift you now.”
Before she could grasp that staggering news, his arm went around her waist and he lifted her, twirling them around full circle. She panted, blood pounding in her temples, roaring in her ears.
They continued to dance, but she moved as though she were a doll made of rags, her legs barely able to stand. Her world narrowed to the single source of light and life that was the man who held her in his arms again. The man whose love she could no longer deny. Despite the agony of the betrayal, in the core of her being she knew neither the vows she had spoken to Thomas nor the passion they had enjoyed in his bed would ever match the intensity of love and belonging she shared with Geoffrey. As soon compare a candle’s flame to the sun.