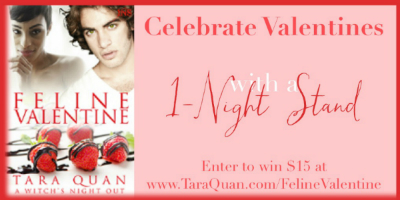 A year ago, I released Fireworks at Midnight, thinking I would leave the world of A Witch’s Night Out forever (I’d planned the series as a trilogy). Unfortunately, my characters had other plans. Since I’d sicced Madame Eve on her cat familiar, earth mage Shelley Dupree insisted I make things right. To be fair, I’d already given her a magical handicap, forced her under house arrest, and buried her in bills—taking away her feline companion did seem a cruel and unusual punishment.

It took me two months of fictional time to even the scales with Feline Valentine.  Part of Decadent Publishing’s 1Night Stand series, my interracial paranormal romance is set in Washington, D.C., where magic-wielding folk try to live alongside us pesky humans. It’s my first true “shifter” AND “foodie” romance (talk about ticking two boxes with one book), and a quick read of the blurb should tell you what I mean.

To celebrate this unexpected return to my favorite series, I’m giving away a $15 gift card. To enter, leave a comment here and drop your details in the Rafflecopter widget at the bottom of this post [or at my website: http://www.taraquan.com/felinevalentine]. 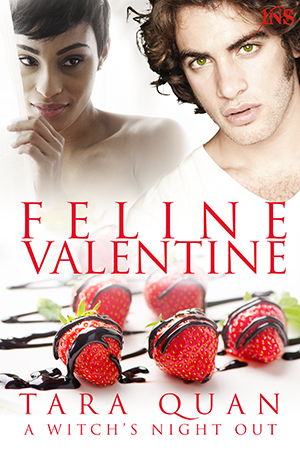 Feline Valentine (A Witch’s Night Out) by Tara Quan
Under magical house arrest in her great-grandmother’s suburban cottage, college graduate and reluctant earth mage Shelley Dupree whiles away most mornings spying on the warlock next door. Though erotic daydreams offer some distraction, she faces long working hours, cash flow problems, and a repeat burglar. On Valentine’s Day, she sets a trap for the mysterious intruder, intent on ending his crime streak once and for all. But her scheming cat familiar foils her best-laid plans, and, with a little help from Madame Eve’s 1-Night Stand service, she discovers a far more dangerous species of magical feline.

After moving in next to a ramshackle building on the outskirts of Washington, D.C., pastry chef Adrien Chatdurois is plagued by repeat sexual fantasies starring the same curvy brunette. In a state of constant arousal, he devotes his early mornings to grueling exercise and spends the rest of his day handcrafting the city’s best chocolates. When his younger brother stirs up trouble on the shop’s busiest day, the frustrated shifter is forced to pay a surprise visit on his reclusive neighbor. He soon learns not all witches are wart-covered hags, and one in particular might prove the most delicious of desserts.
Genre: Paranormal Romance, Romantic Comedy, Interracial/Multicultural
Buy Links:
Amazon | ARe | B&N | iTunes | Kobo | GooglePlay | GoodReads
Check out the rest of the series here!

About the Author
Globetrotter, lover of languages, and romance author, Tara Quan has an addiction for crafting tales with a pinch of spice and a smidgen of kink. Inspired by her travels, Tara enjoys tossing her kick-ass heroines and alpha males into exotic contemporary locales, paranormal worlds, and post-apocalyptic futures. Her characters, armed with magical powers or conventional weapons, are guaranteed a suspenseful and sensual ride, as well as their own happily ever after. To receive updates about her new releases and get a free sexy read, subscribe to her mailing list at www.taraquan.com/newsletter.

Excerpt
Her doorbell rang.
An ominous crack followed the box’s impact with her yellowed kitchen floor. Sweat dampened the back of her neck. She must have imagined the sound. Her doorbell had been broken for weeks—months even. She’d taped a scribbled sign telling food delivery people to leave items on the porch. No one other than her family ever visited.
Everything, including the array of curiosities in front of her, must be part of a hallucination brought on by prolonged celibacy. Sweets wouldn’t dare sic Madame Eve’s service on her. Everyone Shelley knew who’d used it had—
Ding dong.
Okay, she could fix this. She’d meet the guy and tell him to scram. No way could the matchmaker’s mojo work in less than five seconds.
Muttering curses under her breath, she marched past the counter, through her makeshift office, and across the small living space, to stop in front of the thick wood barrier. Peepholes hadn’t been in vogue back when this place had been built. Since she hadn’t bothered to switch out the bulbs after the porch lights died, she couldn’t have discerned more than shadowy shapes regardless.
Pulling her shoulders back, she summoned her inner bitch. She had to run the guy off. Failure would end in disaster. Acting rude and obnoxious was a matter of determination, persistence, and effort.
She swung the door open.
The warlock next door stared back at her.
Her next breath erupted as a cough. “F—udge cakes.”
As opening lines to Shelley Channeling the Shrew went, she could have done better. She blamed her parents. No matter how many times she’d thought, read, and heard four-letter expletives, she couldn’t shake the ingrained childhood habit of modifying them for polite company.
It didn’t help that the man had a brown cake box sandwiched between his waist and left arm. Responding to the stimuli, her stomach had short-circuited her brain and demanded sustenance—ideally, in the form of fudge cake. Her gaze dropped to the bottle clasped in his hand. She’d had a champagne craving since this morning.
Her hunky neighbor’s green eyes had widened to a comical degree. Perspiration beaded his forehead. His Adam’s apple bobbed up and down. When his mouth opened, no sound came out.
What did he have to be shocked about?
Of course, only now did it occur to her she could have pretended not to be home. Just because someone rang the doorbell didn’t mean she had to answer.
It would be so rude not to, her goody-two-shoes inner voice who sounded suspiciously like her mother countered. I raised you better.
As she contemplated slamming the door, an act that met with immeasurable resistance from the metaphorical angel on her shoulder, her neighbor croaked, “It’s you.”
As first exchanges between potential soul mates went, this might be one for the books.
At least the guy came with more than one bribe. A covered plate of chocolate-dipped strawberries balanced precariously on his other palm. Her gaze drifted over his bare forearm and along tensed biceps. The short sleeve of his red T-shirt accentuated his muscle definition.
Her mouth watered. Her gluttonous heart did a little flip. She couldn’t settle on what tempted her more—the food or the warlock.

s fatigued muscles, he tentatively added champagne to the shopping list. If today’s profits met expectations, he should be able to gift the old lady some booze.
Less than a second later, an image of a bottle of peach Schnapps flashed over his vision. Stepping to his left, he took off the wool hat and placed it next to the cash register. Why was his brain fixating on ingredients for a Bellini? He didn’t even like cocktails.
White heat flashed over his vision. He found himself on his knees, crouched over a soft feminine body. Fizzy, bubbly liquid slicked skin the color of caramel. When her back arched, the drink sluiced over a set of tensed, quivering abs to soak her lacy pink waistband. He dipped his head, his tongue trailing over the potent mixture of peach, alcohol, and woman. He dug his fingers into her lush hips, tilting her in the opposite direction so the remaining liquid trickled over her ribs to catch along the underwire of her bra. Capitalizing on the excuse to taste, he—
Fingers snapped repeatedly in front of his face. “Oy. Where the hell did you go?”
With a sigh, he directed his gaze at his sibling. “Bass, what the hell do you want?” Their two-year age gap allowed for a healthy dose of fraternal bonding, but a lifetime as the man’s big brother had also built up baseline cynicism. Sebastien’s unannounced visits tended to have odd and oftentimes very expensive consequences.

DON'T FORGET ABOUT THE $15 GIFT CARD RAFFLECOPTER!!!
a Rafflecopter giveaway