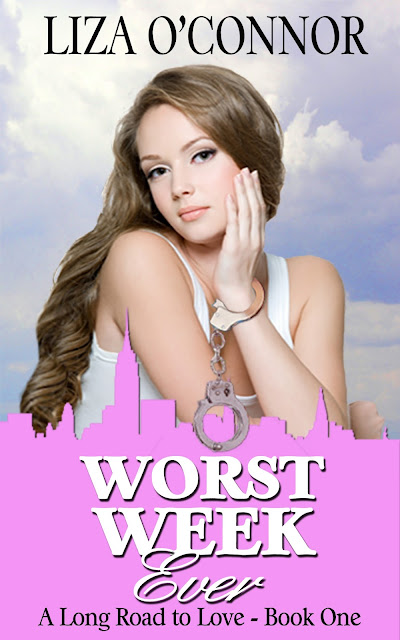 What do you get when you put a hardworking, can-do middle-class young woman together with an egoistical, outrageous, billionaire boss, then throw in the worst week of disasters imaginable?
Book 1 of the 5 book series A Long Road to Love, named Worst Week Ever.
Trent Lancaster spends one month without his Executive Assistant (or as his drivers refers to Carrie: 'Trent's brain, left hand, and right hand'). He's had a miserable month without her at his side and to ensure it never happens again, he intends to marry this brilliant beauty. Only given all the times he's threatened to fire her, he's not sure she even likes him. However, the future of his company and his happiness depend upon him succeeding, so Trent begins a slow one week seduction that happens to coincide with Carrie Hanson's Worst Week Ever when everything that can go wrong does so in hilarious form.
(Hilarious to the reader, Carrie is not having much fun this week.)

Trent’s focus returned to Carrie as he slipped his left arm around the back of the seat while leaning closer, invading the little space she had. Her heart quickened. God, she loved his scent. It made her feel— She shook her head. Get a grip! He’s your boss and he wants to see a Broadway show! “Here’s the review blurbs for each.”
He leaned in even closer, so his chest pressed against her arm. Her face warmed. Between her near death experience and his cologne, her professional demeanor struggled.
You can do this. He’s your boss and that’s all. She breathed in deep, in an attempt to steady her nerves. Unfortunately, she’d fail to account for the effects of a lungful of Trent’s wonderful scent. God, he's intoxicating. She focused on the reviews, needing to distract herself from his cologne. She smiled as she read the comments for Tall and Tiny. It sounded so good. She wished she had the time and money to see it.
Given Trent began reading before her, he should have finished and made his decision by now. She steeled herself and looked up at him. His gaze focused on her instead of the screen.
“Do you want to hold my iPad?” Carrie knew he hated when people treated him like a child.
A faint smile touched his lips. “No, let’s do the last one.”
“Tall and Tiny?”
He shrugged.
She tilted her head. “If you don’t even know the name of the show, why do you want to see it?”
He smiled as if he’d just done something very clever. “Because you do. I could see it in your face.”
Why would what she liked matter? Then a possible explanation came to her. “Do you want me to go with you?”
He gently tugged on a strand of her hair. “Hey, we just went through war together. We both need a laugh.”
His unexpected generosity shocked her. She felt like the egoistical sun had finally noticed inconsequential Pluto still working hard to race around it.

Liza O’Connor lives in Denville, NJ with her dog Jess. They hike in fabulous woods every day, rain or shine, sleet or snow. Having an adventurous nature, she learned to fly small Cessnas in NJ, hang-glide in New Zealand, kayak in Pennsylvania, ski in New York, scuba dive with great white sharks in Australia, dig up dinosaur bones in Montana, sky dive in Indiana, and raft a class four river in Tasmania. She’s an avid gardener, amateur photographer, and dabbler in watercolors and graphic arts. Yet through her entire life, her first love has and always will be writing novels. She uses all her life experiences to create interesting characters, set them loose, and scribe what happens.