Today, I have AR DeClerck over.
She's sharing book two of
her fabulous Steampunk Adventure.
I'm so excited! 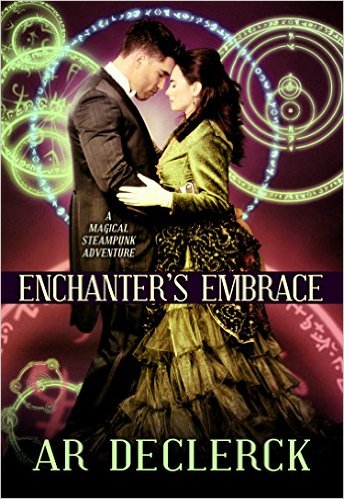 Icarus Kane and Cora Mae Jenkins have left London on their honeymoon, and Archimedes Merriweather and Lady Lucia Conti finally have a moment to consider a true courtship. Unfortunately, their hard-won peace doesn’t last when a message arrives in London detailing possible black magic in the agricultural area called Kensington. The Queen herself dispatches Archie and Luci and a few of their friends to the Summer Ridge estate to get to the bottom of the problem and take care of the black mage if he exists.

There are secrets in the corridors and passages of Summer Ridge, and someone doesn’t want Archie and Luci poking around. The intrepid duo will have to face demons, poison and surprises as their old regrets and unforgotten secrets begin to come back to haunt them. Archie will do anything to save his Lady, and she will do anything to keep him safe.

“This way!” Archimedes ran across the field toward the isolated cabin nestled against the copse of birch trees. Smoke puffed from the chimney and a light was visible in the window.
“Archie, slow down.” Corrigan pulled him to a halt with a hand on his arm. “We have to be sure this isn’t a trap.”
Archie shook him off, but he stayed put. The captain was right, as much as it galled him to admit it. The path through the fields had been easy to read once they had asked the aether to illuminate it. They squatted at the edge of the woods and looked at the cabin.
“A horse-drawn buggy left here not long ago,” Grayson said quietly. He pointed to the tracks that passed near their hiding spot. He held his pistol at his side, but his eyes were narrow and focused.
“We need to know if they’re in there.” Archie’s wand was at the ready, his heart pounding hard in his chest. “They could be hurt.”
“Or already gone,” Corrigan reminded him. “We go in slow and with purpose. We keep our wits about us and don’t get distracted by the way things seem. Agreed?”
All the men knew the way dark mages could manipulate and confuse. They crept toward the cabin as quietly as possible, until a shrill scream rang out over the silent countryside.
Archimedes wasn’t a fool, but something inside him snapped at the sound. It was so full of terror that a knot formed in his throat and tears in his eyes. He clutched his wand so tightly he wondered why it didn’t break, and he ignored Corrigan’s shouts as he slammed into the door of the cabin, leaving it hanging only by its bottom hinge. He stumbled into the room, but skidded to a halt as the scene swam before his eyes.
“Lucia?”
She turned at her name, blood smeared over her face and across the bodice of her dress. She tilted her head and looked at him. The large carving knife she held in her hand dripped bright red blood onto the floor. She didn’t drop it, but it lowered a fraction. Elizabeth cowered on the floor at Lucia’s feet, her arms over her head. Her arms were red with the gashes where the knife had cut into her skin.
“What are you doing?”
“Kill.”
The word, spoken with the soft inflection one saves for a lover, sent goosebumps over Archie’s skin. He held up his hand to hold the others back as they came into the room behind him, their gasps of disbelief barely concealed.
“Put down the knife,” Archie said softly, moving closer to Lucia.
“Archimedes…” Corrigan warned quietly. “Be careful.”
“Kill.”
“No, darling. We don’t want to kill.” He moved closer, until the tip of the knife was against his shirt. “You are good.”
“I’m not.”
He did not wince as the knife pricked the skin at the edge of the plating where his human parts met his clockwork ones. “You are. You are good and kind. You are the woman I love.”
With Lucia’s attention on Archimedes, Grayson crept forward and picked up Elizabeth, running from the cabin with her in his arms. Corrigan backed up to the door, in case Lucia tried to follow.
“You lied to me.” The knife went a fraction deeper and a soft bloom of red blood flowered on his shirt. “I know.” It was a hiss.
“I don’t lie, Lucia. Especially to you.”
Her eyes were pupilless, the effect of the dark magic leaving her gaze a swirling mass of black. He touched her cheek with his human hand.
“You knew what Edgar was doing to me. You saw it.”
“I didn’t.”
“You did!” She poked harder, and the blood dripped across the blade of the knife.
Corrigan took a step forward, his electrified Bo staff out as he saw the blood. Archie shook his head and held him back with a wave.
“You saw him hurting me. You saw the things he was making me do. You didn’t save me.”
He cupped her face, forcing the soulless black eyes to meet his. He could feel the knife a quarter of an inch into his skin, but she was shaking. The dark magic would not control her for much longer. “I know I didn’t. I think about it every single day. I agonize over it.”
“You didn’t save me. I saved myself.”
“Yes, you did. Now you’re the strongest woman I know. You didn’t let Edgar Baiandelio control you. Don’t let dark magic control you now.”
“Elizabeth must die. She is not innocent.”
“We don’t kill. You heal people.”
He felt her shaking, the knife clattering to the ground as she dropped it.
“There is darkness inside me.”
He pulled her close to his chest and she let him. He felt the blood from his chest soaking through to her dress. “There is darkness in us all. It is how we control it that makes us good.”
“I’m not good.”
He kissed the top of her head and handed Corrigan his wand. Carefully he bent, scooping her up against his chest so that he held her tightly. She was limp, but tears covered her cheeks.

Raised in the mountains of Western North Carolina, AR currently lives by the Mighty Mississippi with her husband, 2 daughters, 2 dogs and a wily cat. She writes adventure romance with a particular love for strong heroines and redeemable heroes. AR believes LOVE is the greatest adventure, and she enjoys writing stories that incorporate ideals of loyalty, honor, sacrifice and personal growth.