My mentor, the late novelist Michael Crawley, labeled me that years ago, because I write in several genres (mystery, paranormal romance, romantic comedy.)  Sometimes all at once in the same book. This girl gets around.

But these days, my publishers are turning me into a social media party girl.  “Frolic on Facebook!” they say.  “Talk on Twitter!” they insist. “Get out there!”

I’m out there, all right.  Apparently, I’m so far out there, I may need mouth to mouth and a good slug of scotch to crawl my way back.

It started with the Berlin Brothel.  Lord knows why a brothel in Berlin decided to follow me on Twitter.  I don’t live in Berlin.  I’ve never worked in a brothel.  Don’t think I’ve even typed the word ‘brothel’ before now.  I certainly haven’t said it out loud.

Then some guy from Crime Writers of Canada said: “Maybe they’ve read your first book Rowena Through the Wall. That book has a following in Germany. The girls who work there have to do something in their downtime.”

Let me do a cyberspace blush here.  Okay, my first book is a little hot.  “Hot and hilarious” as one reviewer put it.  But it’s not x-rated.  It’s not even R, according to my daughter.  (Husband has yet to read it.  We’ve hidden it well.)

Then friend Alison said: “It’s a brothel!  Maybe your latest romcom, The Goddaughter Caper, is required reading by the – em- owners.”

But back to Berlin.  I didn’t follow them back.
Somehow, that didn’t matter.  The word was out.

‘Amateurvids’ announced they were following me.  Good, I thought.  I like nature films.  Take it from me, this outfit doesn’t film bunnies in the wild.  Well, maybe a certain type of wild bunny.

Then ‘Dick Amateur’ showed up, wanting to connect. Author friend Gloria read a few of his posts and said: “You at least deserve a Pro.”

Next, I got “Swingersconnect” following me.  Swingers?  I get sick on a tire hanging from a tree.

‘Thepornfiles’ were next in line.  I didn’t peek.

Then two days ago, an outfit specializing in ‘male penis enhancement’ announced they were following me.  Now, I ask you.  Do I look like a male in my profile photo?  Is Melodie a male name?  And not to be pedantic, but isn’t ‘male’ in front of the p-word a bit redundant?  Is there any other kind?

You wouldn’t want me to be.  No one would.  For one thing, I can’t see two feet in front of me without glasses.  Things that used to be perky now swing south. And my back hurts if I bend over to pick up a grape.

So I’m not following them back.

Do you have a twitter story to tell?  Leave it here in the comments. 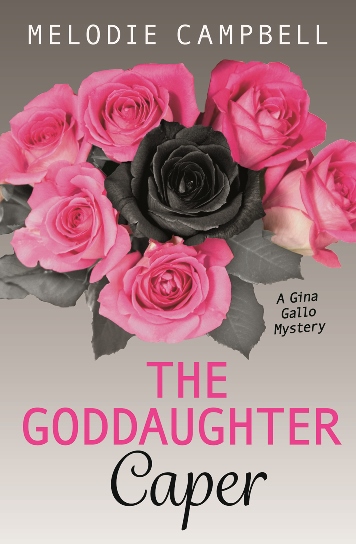 Even old mobsters retire eventually…don’t they?

Strange things are happening in Steeltown.  A body shows up in the trunk of Gina’s car.  Another is mistakenly shipped to her cousin Nico’s new store.  And then Gina and Nico stumble across a stash of empty coffins!  Worse, everything mysteriously points to her own retired relatives from the Holy Cannoli Retirement home…

With her wedding just weeks away, Gina is determined to get to the bottom of it.  But she’ll have to act fast, because the police are right behind her.

Consider Melodie Campbell’s latest humorous Mafia tale a must read.  (I know, you didn’t believe humorous mafia stories existed, but they do.) I just finished the Goddaughters Kaper, aka Nancy Drew tries to make sense out of the 3 stooges of Canadian Mafia.

Here’s one of my favorite lines from the book

Nico, I could kill you!”
“Don’t be silly. There’s no more room in the trunk.”

This tells you how the mafia, with their excessive need to clean up, can be so funny. Simply focus on the funny issues like the practicalities of growing a business using geriatrics and morons. Ignore the dead bodies needing buried.

Gina Gallo is about to marry non-mafia Pete, a hunky news-reporter. She’s determined to stay out of her massive family’s not so legal enterprises for good. Sadly, a week into her good intentions, she’s knee deep in dead bodies. And somehow her inheritance that's locked in a trunk gets waylaid by the incompetent help as well.

No good deed will go unpunished in this book, trust me.

This is a short novel, but it delights from beginning to end. Highly recommend it!

5 Stars
that look like coffins
with dead bodies inside.

WHO IS MELODIE CAMPBELL?
The Toronto Sun called her Canada’s “Queen of Comedy.”  Library Journal compared her to Janet Evanovich.   Melodie has won the Derringer, the Arthur Ellis, and eight more awards for fiction.  Last year, she made the Amazon Top 50 bestseller list, sandwiched between Tom Clancy and Nora Roberts.  The Goddaughter Caper is her 10th book.