NO GREATER LOVE
&
LATTICES OF LOVE
by Eris Field 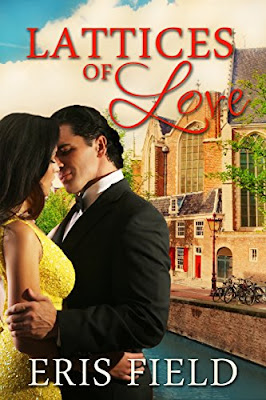 Emine Wheeler, a 26-year-old Turkish-American professor of psychiatric nursing, has vowed to marry for love, like her American father. When she meets Marc van Etten, a reticent Dutch psychiatrist, at a conference in Amsterdam, she recognizes him as the man she has been waiting for and knows that she can’t live behind the lattices of old harem rules any longer.

Marc, who believes that his colleagues blame him for his wife's suicide, restricts his life to work and caring for the troubled four-year-old girl he calls his daughter. But, when Emine runs into difficulties, he offers his assistance. Emine, ignoring the age-old harem rule that forbids talking or spending time with a man who is not a family member, accepts his help.

Later, when Emine must choose between accepting the family-approved proposal of a man she does not love or damaging her family's honor, Marc offers a solution—marriage. It will save her family’s honor and provide a mother for his daughter.

Believing that her fierce love for Marc will be enough, Emine agrees, only to discover that it is not. When Marc erroneously accuses her of betraying him, she flees. Realizing belatedly that he loves Emine beyond everything in his life, Marc must find a way to win her back.

“We can’t finish the quilt unless you help us?” Mina said already half asleep.

“How can I be of help?” He was about to say good night to his small daughter and was surprised by the urgency of her request for help.

“We are almost done making the quilt top. We used pieces of cloth that Mama had worn but the inside has to be made of something that the father has worn. That way babies know that their father will always protect them.” She nodded wisely. “That’s how they make quilts for babies in Turkey.”

“The quilt is for a baby?” Marc sat down abruptly on the side of the bed.

“Yes. I asked Mama how we could get a baby for the quilt.”

“Mama says that when a mother and father love each other very much they are able to become as one and, when they become as one, they can make a baby.”

“Mama said that?” He choked out.

“Yes, I asked her what it was like to become as one but she said that she did not know.”

“She said that she did not know?” His head snapped up. “Are you sure that is what she said?”

“Yes. In English, she said, “I don’t know.” Mina snuggled down under her covers. “We really need something to line the quilt,” she grumbled sleepily. 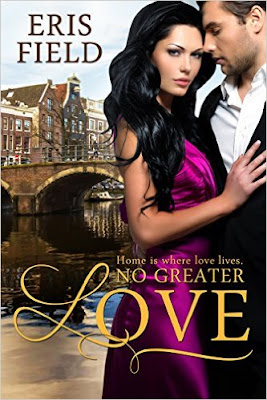 Home is where love lives. This contemporary, warm, international romance moves from the U.S. to Holland, Turkey, and the Valley of Rubies. Orphaned at age eight by an earthquake in Turkey and adopted by an American family, 28-year-old Janan has grown into a beautiful woman, a Circassian beauty. She dreams of having a home of her home, a home with love, but love seems to have passed her by as she has spent her life looking after the family, including an elderly, frail uncle whose father had sent him away from Holland as a child to escape German deportation during WWII. Once jilted at the altar and now struggling with leukemia, a Dutch psychiatrist, Pieter, has given up on love. He has committed himself to helping the child refugees flooding into Amsterdam. That is, until he meets Janan and falls in love at first skirmish. When she meets her uncle's protege, Pieter, Janan recognizes him as the man of her dreams, and knowing that he will be gone in the morning, asks him for one night. After introducing Janan to the purposes and outcomes of eight different kisses, Pieter vows to beat his illness and return. Alone and faced with saving herself and others, Janan accepts a quid-pro-quo offer of help but will that decision destroy her chance of finding happiness?

“Oh, good! You’re breathing on your own.”

Pieter dragged his eyelids open to see a beautiful mouth hovering over his. “I could stop,” he whispered.

“You’re not well.” The eyes staring down at him were accusing.

“I asked you to shovel," she whispered as a stricken look crossed her face.

“I tried.” He felt her collapse on top of him. Strands of silky hair clinging to his chin and tears cold against his neck.

“I could have killed you!” she wailed.

“But you didn’t.” His arms came up awkwardly at first and then they settled around her holding her close. He was holding an enchanting woman in his arms and, in response to the slim knee pressed between his legs, he experienced a stirring that he had not felt in a long time.

As a seventeen year old student nurse at Albany Hospital, Eris met a Turkish surgical intern who told her fascinating stories about the history of Turkey, the loss of the Ottoman Empire, and forced population exchanges.

After they married and moved to Buffalo, Eris worked as a nurse at Children’s Hospital and at Roswell Park Cancer Institute. During the time she took time off to raise five children, she amassed a collection of rejection letters for her short stories. Later, Eris returned to school and earned her master’s degree in Psychiatric Nursing at the University at Buffalo. While teaching psychiatric nursing at the University, she wrote a textbook for psychiatric nurse practitioners—a wonderful, rewarding but never to be repeated experience.

Now, Eris writes novels, usually international, contemporary romances. Her interest in history and her experience in psychiatry often play a part in her stories. She is a member of the Romance Writers of America and the Western New York Romance Writers. In addition to writing, Eris’ interests include: Prevention of Psychiatric Disorders; Eradicating Honor Killings, supporting the Crossroads Springs Orphanage in Kenya for children orphaned by AIDS, and learning more about Turkey, Cyprus, and Kurdistan.