Luck Be An Angel - How the story came to be

How this story came to be.
I created this story from the children's rhyme. But to be honest, I only remembered the first two lines of the Mother Goose Poem.


There was an old woman who lived in a shoe.
She had so many children, she didn't know what to do.

I had no memory of the third and fourth line of the poem and upon looking them up, I don't like them at all:

She gave them some broth without any bread;
And whipped them all soundly and put them to bed.

So in my book, the mother is in her 30's and adores her plethora of sons. Honestly, she is the kindest person you'll ever meet. Fortunately, for her and her boys, she has a guardian angel who ensures she and boys get whatever they need, mostly by winning contests.

I also threw in the very mean town I once lived in. My mother was concerned by the race riots in Pine Bluff. (It was getting a bit crazed. Schools were being set on fire, students killed.) So she packed up my brother and me, bought a trailer, and moved to an all white town with some of the meanest people I've ever known.

So none of the local students would talk to any of the 'new' students. Thus, I focused on befriending the other new students like myself. In short order, I had about thirty friends. This was good for us all, since a tribe of thirty was more than even the worst of the homegrown trouble wished to deal with.

In fact, some of the abused locals asked to join our group.  Thus, in short order, life got better for my posse. That was not the case for everyone. A girl who was also from my prior school in Pine Bluff, but wanted nothing to do with me and my group, was determined to go it alone. Only she reported a girl for smoking in the bathroom and in less than an hour later she had to be taken to the hospital. She'd been beaten and kicked by a mob. Needless to say, she returned to our old school in Pine Bluff once she recovered. She felt safer there.

With my ever-growing posse, I usually had no issue with locals, but there was one situation where several locals stole twenty dollars out of my purse. And sadly, one of the locals was a member of my group. (She'd been forced to help them.) The principle reamed me when I reported the locals for stealing twenty dollars from me, insisted they wouldn't do such a thing, but when I mentioned the one girl had already admitted to doing it, he called them in, and eventually, the twenty dollars was returned.

However, that set a fire under the principal to find a reason to kick me out of school. With my large posse of friendly people, we never got in fights or caused trouble.

So they focused on my mother. After my brother graduated, she often left me at our trailer alone. I was fine being alone, but the school saw it as an opportunity to kick me out. Thus, Mother had to return to the trailer, rather than staying at her house, closer to work. This made her very grumpy.

During the summer we would always return to our house, and missing my friends I would write to them. Being a budding author even then, I would write them funny stories about a plastic poodle name Alfie and all the trouble he would get in.

One of the mothers read one of my stories in which Alfie keep me up all night with his drinking and smoking pot.

She, of course, let all the mothers know, and when I returned to school, I discovered none of my friends were allowed to talk to me. They were apologetic, but their moms now believed me the worst teen on the planet.

Thus, I asked Mother if we could return to Pine Bluff.
Mother was thrilled to shorten her commute by half. So I returned to my truly integrated school, and while the education wasn't half as good, the company was fabulous. I had friends who had never left and I made new friends as well.

So when writing Luck Be An Angel, I chose the meanest town I've ever known for Sara Smith and her sixteen boys. Still, I changed its name to Briarville because this town had no problem killing people who weren't white and who weren't being 'proper'. Seriously, the KKK was alive and well there, and probably still is.

In my story, a reporter, Ethan Long, acquires fake certificates so he can be a "tutor" for her 16 boys, while he discovers who the father is to the boys. Without a doubt, there is only one father, for the boys are nearly identical except for height.

What Ethan hadn't planned to do was fall in love with the woman, but she is the nicest person he has ever met.

So now he must decide which is more important: the woman and her sons that he has grown to love, or his crappy job with a horrible boss. Sounds like an easy choice, but his personal life has always been a disaster while his professional life has kept him sane.

Hmmmmm I wonder which way it will go.... 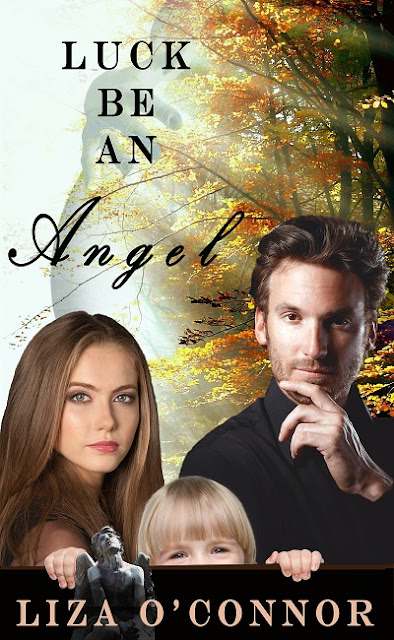 This is an uplifting, sweet romance.

Reporter, Ethan Long, is sent into the backwoods of Arkansas to investigate a woman who claims her sixteen boys were born by Immaculate Conception. Not believing in divine intervention, Ethan plans to uncover the identity of the man who continues to impregnate Sara Smith every year, leaving her to raise her sons on nothing but luck and love. He enters their home as a tutor and eventually discovers the truth, but not before he has fallen in love with Sara and her wonderful boys. Now he must face his own crossroad in life and decide whether to follow his heart or his professional obligations.
AMAZON

So Far, everyone who has reviewed
Luck Be An Angel has given it 5 stars
but it needs more reviews
or it will never be able to be promoted,
So check it out while it is on sale!

“This story will keep you up reading and make you believe in miracles. I couldn't stop when I started, I had to know how the story would end. Once again, I can blame Ms. O'Connor for my lack of sleep but I really did gain so much more!”

*5 stars!!!
“I loved everything about this story. A Sweet and Fabulous ‘feel good’ Valentines story with love, laughter, and trouble on the side.”  LLB
*5 stars!!!

“If you like books that make you think and smile, question your own and society’s behaviour, and finish it with a glowing smile and renewed belief in the power of love, then I can highly recommend O’Connor’s latest gem.”  Devika Fernando
*5 stars!!!

“This is a sweet romance with a touch of angel magic! I love the wonderful bond between mom and child (all 16!) and the way Ethan looks out for them all. Luck Be An Angel is a quick read and a lovely poignant story.”
*5 stars!!!

“I loved Ethan, Sara, and her sixteen kids, each having individual personalities, strengths, and weaknesses. When Ethan meets Sara and her kids, he is automatically taken with them, as are you, the reader. It's a wonderful and unique story that I highly recommend!!”