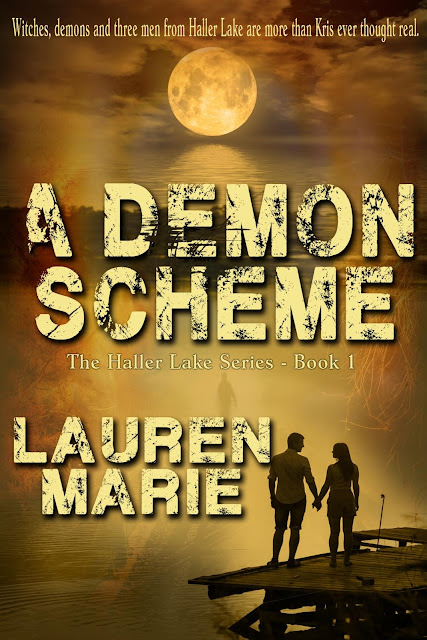 KRIS BENNETT is an art consultant and lives by Haller Lake. On an evening after an opening for a new artist, she drinks a glass of Brael Mist wine. The peach chardonnay is tainted with cyanide, other poisons and an evil enchantment spell. It opens her mind to a spiritual world she never believed existed.

ROMAN is a guardian of Haller Lake. He is told by the Lakeman's Oracle he must watch over Kris and keep her safe from an evil interested in her abilities. When she drinks the wine she is able to see Roman and the other lake guardians. His love for Kris comes on quickly and helps her understand the new world she is experiencing.

ABEDNEGO BRAEL is a low level demon who wants Kris body and soul to be possessed by the ghost of his long dead love ROCHELLE. He's done it before, but that body aged and died, releasing Rochelle back into the world. SHADRACH AND MESHACH are Abednego's brother demons who are also after Kris, but for different reasons. They realize she has a great power and if they are able to turn her, they could take the power for their own uses.

When the wine opens Kris's mind, she learns about her own magical powers from her alter ego, ELZABETH, who has long lived deep inside her mind and guided other women in Kris's family, who also had magical abilities.

With the help of the Haller Lake guardians, Kris fights to retain her very soul and her growing powers.

Kris backed up a step away from Abednego. “What do you want?” she hissed.

He smirked at her. “I think you know, Miss Bennett.”

“What is this place, Abednego?” Kris asked and looked back at him.

“It's the Between. Your spirit is in the space connecting the different realms.” He smiled at her and looked aloof.

“How is it I’m here? Roman has the sage and lavender pots burning. You shouldn't be able to reach me.”

Abednego looked over his shoulder at the woman and started to laugh. “Your other should never have let me touch her. Once I felt your essence there was a connection. I know you felt it, too, my dear.”

“Miss Bennett let me ask you a question. Why have you denied your abilities all of these years?”

“I don't know about any abilities,” she said.

“Someone who is so honest is telling a lie. You've always known about them.” He continued to stare with eyes black. “There was a time when you were young. You played with jacks and when your mother came out to get you for lunch all ten of the metal pieces spun like tops.” He closed his eyes. “I can hear her voice tell you the powers should never be used or seen by anyone. You must always keep them to yourself, she said.

Lauren Marie’s first published series - The Men of Haller Lake - originally came out in 2010. She’s learned so much over the last seven years and it’s been a dream to get the stories re-edited and problems with point of view corrected. With Books to Go, Now’s help the dream has become a reality with the release of A Demon’s Scheme - Book 1 of the Haller Lake series.

Lauren likes to receive feedback. If you want to send her likes and dislikes, you can go to the contact us page on the web-site laurenmariebooks.com or write to her at themenofhallerlake@hotmail.com. or friend her at facebook.com/laurenmariebooks. She does respond to feedback.