Pamela Lynne shares Surrendering The Past

SURRENDERING THE PAST
The Granville Legacy series, book 1 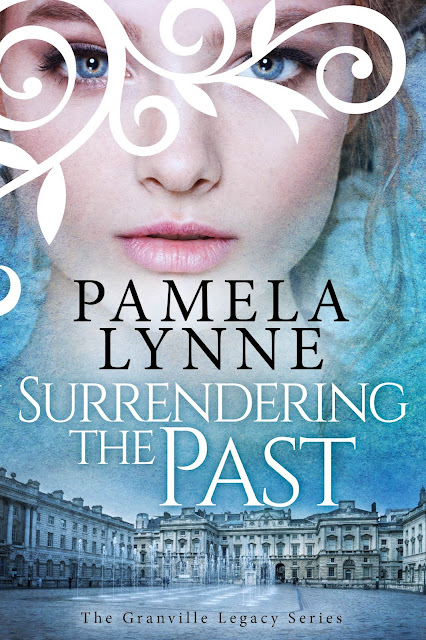 In a world of honor and obligation, falling in love can be a dangerous game. Captain Richard Granville has returned to London after serving the Crown in perilous missions fighting Napoleon’s army. Bone weary and distrustful of all around him, the captivating Jane Dawson awakens his long dormant desire for more than a solitary existence. When he learns she is betrothed to his father, the conniving and dangerous Earl of Litchfield, shadows of the past descend upon Richard, bringing along memories of a tortuous childhood and his failure to protect the person he had loved most.

Jane Dawson would pay any price to renew her family’s happiness, but is the cost of marrying Lord Litchfield too high? A woman of virtue and honor, she cannot break a promise once given, especially when doing so would ruin those she seeks to protect. But can she ignore the connection she feels to the wild soldier who understands both her duty and her heart?

Follow the men of the Granville family in this suspenseful Regency romance series as they discover that their family legacy is much darker than they realized, and that the future holds treasures they can only grasp by surrendering the past.

“Ah, my son and my nephew. You have finally joined us.” The earl’s voice held a sickening sweetness that made Richard want to run. It was the voice Litchfield always gave when he was up to something vile—the performance before the mask was removed to reveal the evil underneath. Richard began to question his belief that the purpose of the evening was simply to celebrate Wesley’s betrothal, but rather something far more sinister.

Neither man responded but stood as the earl’s icy gaze trailed over his son. “It is good of you to make an appearance, Richard. I did not know if you were alive or dead these last two years.”

Richard’s outward appearance did not change as his father spoke. He retained the cold, emotionless expression he held when he walked through the door. Inside, he was reminding himself that he was no longer a child, and that voice need not send a bolt of fear straight through him. “You seemed to know enough to find me last week.”

“Yes, well, London is my town, is it not? I have many acquaintances here who like to fill me in on all the goings on. I am not fortunate enough to have friends in France or wherever it was you were all this time.” He paused once more to search Richard’s expression. Knowing full well what he was doing, Richard kept his gaze hard and unyielding. “Well, it is of no matter now. Your brother will be happy to see you.”

As the earl’s attention turned to Julian, Richard’s eyes once again wandered to his brother. Wesley seemed to stand straighter than the last time he saw him. As the eldest and heir to the considerable Litchfield estate, Wesley, Viscount Ashly, certainly had reason to be proud. However, it was not pride Richard read in his eyes as Wesley stared into his own, but curiosity mixed with something Richard could not name.

He father’s voice resonated beside him, but Richard barely heard him as the women in Wesley’s company came into focus. He recognized Rachel by the way she smiled sweetly in his direction. The years had been good to her. He remembered her as a slightly mousey, and mouthy, young lady, but the woman standing there was beautiful. He assumed the lack of a husband had kept her young and strong.

He nodded to her and turned his eyes to a smaller woman with many of the same features standing between Rachel and Wesley. She had a grip on his brother’s arm that left no doubt who she was. Kathleen. My future sister. The possessiveness in her expression hardened her otherwise lovely features, and Richard wondered at the cause of the protective stance. A slight look to the left of Wesley gave him his answer.

Captain Richard Granville was not often in the company of women. He had no sisters or any living female relations. He had often thought this was because the Granville men were so large and consuming that there was no room for delicacy, and the women just could not survive among them. There were, of course, the whores who followed the encampments along the battlefields and the occasional female spy who could never be trusted. But having so little experience with ladies in polite society, he was at first surprised and then gratified as a blush crept up this woman’s features as he held her eyes in his own. He heard the cackling laugh once more and watched as her blush intensified and turned into one of shame. She turned away, and Richard immediately missed having her eyes upon him. What was this angel doing in the den of the devil?

Pamela Lynne grew up in the American South, surrounded by Southern Gothic works by Faulkner, O'Connor and the like. These authors helped shape her evolving mind and continue to influence everything she produces as an adult. It was a Regency-era wit from across the Atlantic, however, who lit a life-long interest in 19th Century England.

Pamela cites Jane Austen as her primary literary influence and she delves into the darker aspects of Regency life in all her novels, most particularly in the upcoming Granville Legacy Series, where she explores the bonds of family and what it costs to break them.

Pamela currently lives in the rolling hills of Tennessee with her husband of more than a decade, three kids, two cats and one very blond dog. She is still a Marianne hoping to grow into Elinor, or Clairee from Steel Magnolias.

Email ThisBlogThis!Share to TwitterShare to FacebookShare to Pinterest
Labels: British Regency, Pamela Lynne, Surrendering the Past