EACH DAY I'LL SHARE A BIT ABOUT EACH BOOK IN THIS

A Right to Love
Available at
AMAZON 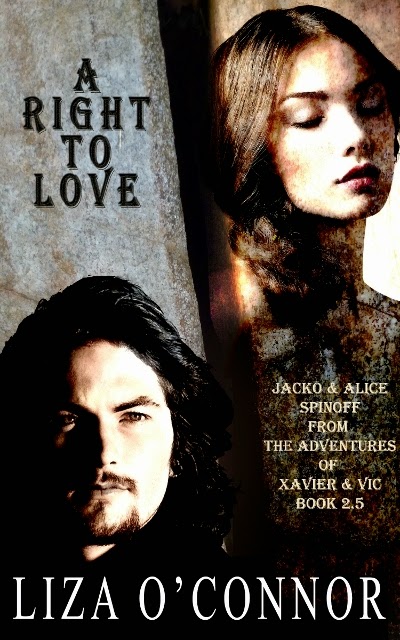 A Right to Love
by
Liza O'Connor

A Romantic Spin off of
The Adventures of Xavier & Vic

Jacko, a gypsy with a great love for stealing, rescues a suffragette from Bedlam. Upon returning the elderly woman to safety, he meets her blue-stocking daughter. Alice has decided she prefers managing her estate farms over London society. She is resigned to never marry until the handsome and surprisingly wealthy man with a dark past and several identities steals her heart.

Alice returned to the package, cut the twine and unwrapped the paper. She lifted up a colorful silk scarf wrapped around something oblong and hard. As she unwrapped the scarf, she caught the musky scent that had haunted her senses in her sleep. Jacko.

“What is it?” Thomas asked.

Alice had become so enchanted with the scarf, she had failed to notice the item wrapped inside it. In her hand lay what looked to be an ivory handle. But to what?

She noticed a pearl inset on one side and pressed it. A lethal four-inch blade of silver jutted out.

“Dear Lord!” Thomas exclaimed. “Do you think Carson sent this as a threat?”

“No.” She smiled and stroked the handle. “I think Jacko sent it as a gift.”

“A gift? What type of man sends a knife to lady?”

She pressed the scarf to her lips. “A very unique one. A man who admires a woman good with knives.”

Placing the scarf around her neck, she examined the slender blade. When she pushed the pearl inset again, the blade returned inside the handle.

“Now that is clever.” She showed Thomas how the knife could appear and disappear.

He scowled and stepped back. “Perhaps you should put the ‘gift’ in your safe.”

“First, I must show it to Mother.” She headed to the door.

“Your mother is far from recovered. She does not need to know ill-dressed gypsies are giving you knives!”

Alice stopped and turned to Thomas, angered by his words. “You will never refer to the man I intend to marry in such disrespectful terms again.”

“Marry? You cannot marry a gypsy.”

Thomas refused to back down. “Your mother will not allow it!”

“It is not her say either. However, I believe once she knows Jacko better, she will welcome him into our home.”

“A man who risked his life to save a woman he had never met.” She caressed the ivory handle of her hidden knife. “A man who wishes me to be strong and unafraid.” She then recalled them seated together at the kitchen table. “A man with warmth and laughter in his eyes.”