Pack of Trouble, Bk 5, The Adventures of Xavier & Vic, by Liza O'Connor 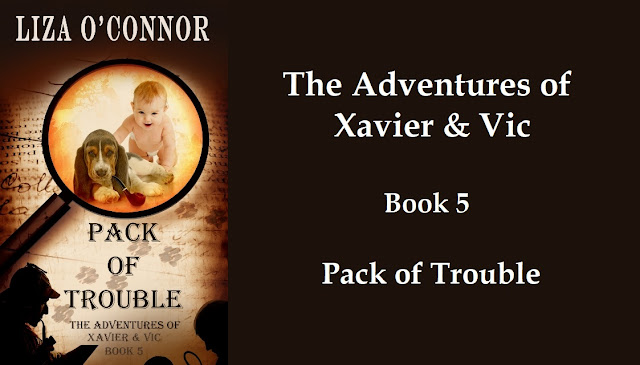 The Adventures of
Xavier & Vic
–
Book 5

Pack of Trouble
By
Liza O’Connor
∞
Cases to be solved: 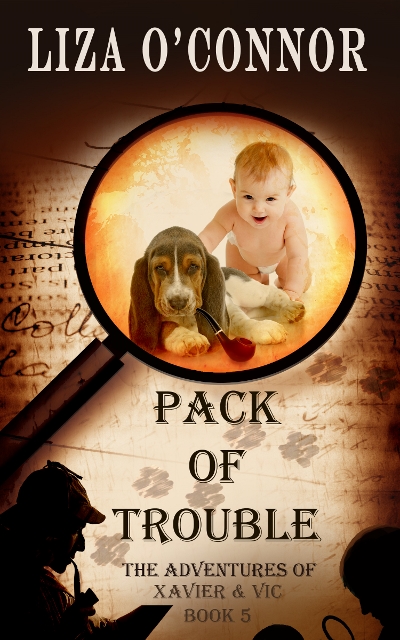 While Xavier’s plan to take a holiday in Europe for Vic to have her baby incognito works well enough, complications during the birth almost take both mother and child. Dr. Connors performs his first cesarean ever, but it has to be kept a secret since most believe Vic is a young gentleman.
While successful, it Vic takes months to recover. A prisoner to the bed, she spends her time encouraging marriage between two of their employees. Unfortunately, Xavier’s original negotiations with Tubs prevents the giant from acting on his heart. While Xavier chases about ladies enjoying the sun, Vic convinces Tubs to resign his service.
When Xavier and Vic return to England, the head of Scotland Yard awaits them at the dock. A great change in Parliament has occurred due to the fallout of their last investigation. England is crumbling beneath an outbreak of crimes and their help is desperately needed before lives are ruined and jobs are lost.

Once inside his surgical room, Dr. Connors ordered everyone but Xavier out. All but Tubs complied.
“Thank you, Tubs, you can go,” Connors snapped.
“All the same with you, I’ll stay.” He then focused on Xavier. “He shouldn’t be cutting to set bones. He should be able to do that by feel. And if he can’t, I can.”
“You can set bones?” Connors challenged.
“I’ve set my own all the time, and I can clearly walk and they don’t hurt, so I’d say I can do bones really well.”
“Yes, your nose is inspiring.”
“My pa kicked me in face when I was three. Nobody set that one ’cause I hadn’t learned how yet.”
“Enough!” Xavier snapped. “Connors, will you at least allow him to try? Tubs has never once overpromised on something he says he can do.”
“He can try setting the right leg. If he can’t, I’ll repair it surgically.”
Tubs grabbed Vic’s leg, pulled, causing her to growl, then released it.
“Damn it, Tubs! I didn’t mean now! Turn around while I get Vic’s pants off so I can see to the damage you just did.”
Tubs glared at him. “I didn’t do no damage. I set the leg like it needed. There’s no reason Vic has to suffer pain while you undress him. He don’t need to be naked to set bones.”
Once the pant leg was cut off above the injury, Connors examined the bone. He continued to feel the leg until Xavier lost patience. “Connors, what is your finding.”
He stepped back and shook his head. “The leg is so well set that I can barely detect the break.” He focused on Tubs. “Have you ever set an ankle?”
Tubs nodded. “Takes longer, due to all the little bones, but I can do it.”
Connors pointed to the bones he believed were broken.
Tubs did his own feel. “There’s another one further down.” He closed his eyes and allowed his fingers to see for him.
Vic growled.


Xavier petted her forehead. “Turns out we can add bone-setting to Tubs’ long list of valuable skills.

The Troublesome Apprentice — The greatest sleuth in Victorian England hires a young man who turns out to be a young woman.
The Missing Partner — Opps! The greatest sleuth in Victorian England goes missing, leaving Vic to rescue Xavier, a suffragette, and about 100 servants. Not to mention an eviscerating cat. Yes, let’s not mention the cat.
A Right to Love — A romantic detour for Jacko. Want to see how amply rewarded Jacko was when he & Vic save an old woman from Bedlam?
The Mesmerist — The Mesmerist can control people from afar and make them murder for her. Worse yet, Xavier Thorn has fallen under her spell.
Well Kept Secrets — The problems with secrets is that they always come to light, no matter how you wish to silence them.
Pack of Trouble — Changes are a part of life, but these changes almost kill Vic.
The Darkest Days — Muddled cases make Vic very grumpy.
The CrimeLords’ War — Vic is almost killed twice as she tries to prevent a CrimeLords’ War, stop a female Russian spy, and locate Xavier.
Toxic Diamonds — The Queen’s Diamonds have been stolen, Director Stone of Scotland Yard is missing, and there is a toxic gas that may kill hundreds of Londoners.
A Despicable Crime --  Xavier's worst nightmare comes to life. Several of the Crime Lords discover that Xavier has a living mother. The desire to make Xavier dance to their whims is too irresistible to ignore. If they own his mother, they own Xavier.