The CrimeLord's War, Bk 7, The Adventures of Xavier & Vic, by Liza O'Connor 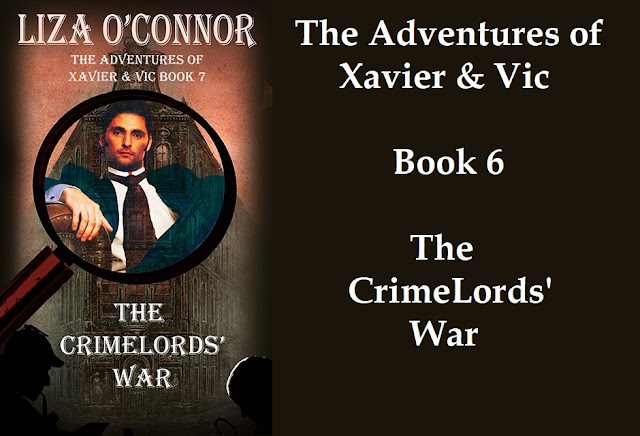 The Adventures of
Xavier & Vic
–
Book 7

By
Liza O’Connor
∞
Cases to be Solved:
The Dangers of Laying Down
The Unlucky Roulette Wheel
A Very Muddled Case of Many Wives & Lovers
Annoying Idiots and Assassins
The Crime Lords’ Wars
The Missing Partner, yet again
The Abduction of Little Maddy

Meet David, Vic’s brother in law
Vic met David Brown when they were roommates at Oxford, only David’s father lost the family fortune and David had to leave Oxford to make a living for his family. He became the finest dentist in London with advancements far beyond anyone else. He has an x-ray machine capable of finding cavities inside the tooth, electric drills capable of cutting out the decay, then filling the tooth with a special amalgamate that does not shrink and fall out in the winter.

But his knowledge goes far beyond dentistry. He is connected with inventors all of the world, but especially in Europe and America. So when Vic asks David to help her get Tubs up and walking he comes at once with his new-fangled arc wielder, ropes and counterweights to make it easier for Tubs to get up and move about.

David is the smartest fellow Vic has ever known and has been critical in solving many of their crimes. 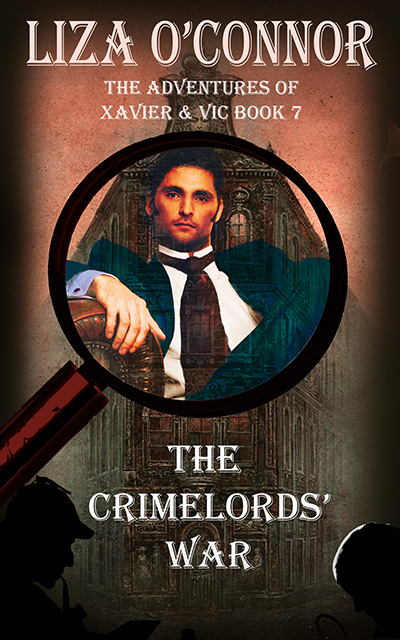 BLURB
Chaos abounds in Late Victorian England. Xavier goes off on a mission without Vic because her protector, Tubs, is not well enough to keep Vic from harm right now. In fact, Tubs is dying and the doctor doesn’t expect him to live for more than a week. Upon discovering Tubs’ dire situation, Vic sets about rescuing him instead.

Good thing too. To all appearances the two strongest crime lords of London have declared war on each other. Only the two attempts on Vic’s life tells her this is all a clever plot by a third party—worse yet, a female villainess.

To stop the crime lords from destroying one another, leaving their territories open to the Russian spy, she must bring Seth and Samson together, share what is really going on, and get them to agree to work against this third party. Not an easy task since Seth Sojourn thinks Vic is nothing but a foolish sop. Unfortunately, Xavier has gone missing, so it’s up to her to convince the angry crime lord that her plan is best. Otherwise, this villainess will kill everyone who gets in her way and bring England to its knees.

Excerpt
David arrived at five with notebook and a cloth measuring tape.

He asked Tubs to raise his arms as he sat on the bed, then measured the distance from the palm of his hand to the thick ceiling beam overhead. He then looked at Vic. “I’d like to drill and place a hook into the beam. That way we can use various equipment on the same hook.”

“Do it,” Vic said as she smiled at Tubs.

David asked Tubs if he could stand.

“Not right now. My legs are pretty tired.”

Vic bragged, “He lifted little boys with his legs for nearly an hour.”

David chuckled. “I doubt I could do that for even a half hour. Good thing Vic found us such a tiny little angel girl to adopt.”

“How is little Maddy?”

David’s smile widened into pure joy. “She is perfection incarnate. Always smiling and happy, so patient with her mother’s constant fussing.”

Vic rolled her eyes. Her sister was always trying to put the world to perfection. No reason why a one-year-old child should be left to her own natural inclinations.

David took further measurements of Tubs and then explained what he had in mind. “Once your legs are strong enough to carry you, I’ll have made you a device that will help you walk to the water closet on your own.”

“That sounds good,” Tubs said glancing at the door of the room where his wife continued to sleep.

“Then I’ll weld it tonight.” David smiled. “I have recently acquired one of Coffin’s arc-welders from America. It’s a fabulous device which creates an electric arc that heats to three-thousand degrees. It not only melts the metal and bonds pieces together, but will deposit the filler metal exactly where you want.”

Vic patted David on his back. Her friend dearly loved American inventions.

“Just build it sturdy,” Vic said, hoping David remembered Tubs weighed four hundred pounds…or he did before he was shot three times in the chest.
David nodded and put up his notebook. “We’ll get you back to full strength, have no fear about that Mr. Tubs.”

Vic walked David to the front door, thanking him for making Tubs a priority.

“You don’t have to thank me. You given me my wife, my daughter, and my home. Anything you ask me to do will always be a priority.”

David gripped her hand. “We’ll get Mr. Tubs back to health. I know how important he is to you and England.”

To be honest she liked David a great deal more than she liked her sister.

The Adventures of Xavier & Vic Sleuth series: (Late Victorian/Mystery/Romance)
The Troublesome Apprentice — The greatest sleuth in Victorian England hires a young man who turns out to be a young woman.
The Missing Partner — Opps! The greatest sleuth in Victorian England goes missing, leaving Vic to rescue Xavier, a suffragette, and about 100 servants. Not to mention an eviscerating cat. Yes, let’s not mention the cat.
A Right to Love — A romantic detour for Jacko. Want to see how amply rewarded Jacko was when he & Vic save an old woman from Bedlam?
The Mesmerist — The Mesmerist can control people from afar and make them murder for her. Worse yet, Xavier Thorn has fallen under her spell.
Well Kept Secrets — The problems with secrets is that they always come to light, no matter how you wish to silence them.
Pack of Trouble — Changes are a part of life, but these changes almost kill Vic.
The Darkest Days — Muddled cases make Vic very grumpy.
The CrimeLords’ War — Vic is almost killed twice as she tries to prevent a CrimeLords’ War, stop a female Russian spy, and locate Xavier.
Toxic Diamonds — The Queen’s Diamonds have been stolen, Director Stone of Scotland Yard is missing, and there is a toxic gas that may kill hundreds of Londoners.
A Despicable Crime --  Xavier's worst nightmare comes to life. Several of the Crime Lords discover that Xavier has a living mother. The desire to make Xavier dance to their whims is too irresistible to ignore. If they own his mother, they’ll own Xavier.