The Mesmerist, Bk 3, The Adventures of Xavier & Vic, by Liza O'Connor 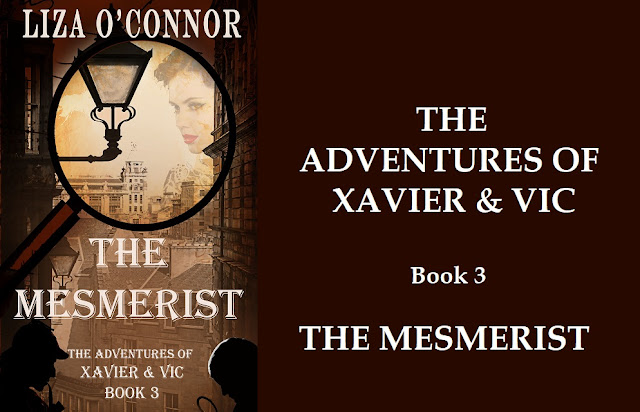 THE ADVENTURES OF
XAVIER & VIC
BOOK 3 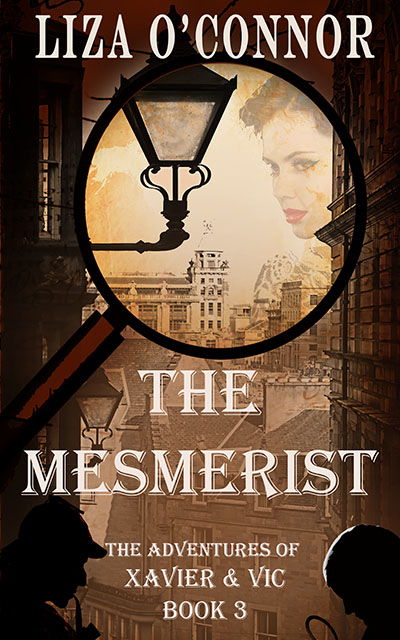 The Adventures of Xavier & Vic
Book 3
The Mesmerist
By
Liza O’Connor
∞
Cases Solved:
The Servant Serves a Deadly Cup of Tea
The Magical Accruing Interest
The Mesmerizing Mrs. Meyers
The Bank Robbery of Mammoth Proportions

Vic has now become a full partner of Xavier Thorn’s Private Inquiries, yet trouble threatens their personal and business relationship as facts from the past come back to haunt Xavier. Worse yet, a formidable foe returns and proves to be more than Xavier can handle.

Fortunately, with his amazing partner and a growing staff, they are ready to take on any problem that comes their way. If only their clients were more forthcoming with the facts!

Once satiated from their lovemaking, Vic raised the topic heavy on her heart. “Xavier, did you see the Queen?”

“In fact I did. She wanted to thank me for my efforts to save the servants forced into sex slavery.”

Vic bolted upright in outrage. “You?”

“And I told her, ‘Your Majesty, you have the wrong man. It was my clever partner, Victor Hamilton, who saved the servants.’”

Vic eyed him carefully as she tried to determine if he was teasing or not. “And what did she say?”

“She wanted to know if you were the spitting image of Dr. Watson.”

Wrinkling her nose in disgust, she resettled on his chest. “I hope you told her no.”

“I did, and then went on to brag profusely about you.”

“What exactly did you say?”

“And have your head swell larger than it already is? Not a chance, scamp.”

“Maybe next time I can go with you.”

“I doubt I’ll be invited again.”

“Did something happen? I saw Stone arrive, and later his men took away a servant in handcuffs.”

His right eyebrow rose an inch. “How do you know he was a servant?”

“He kept saying, ‘I only wanted to refill his tea.’"

"What happened, did you move the cup?”

His words hurt more than she thought possible. She tried to roll away from him, but he held her tight against his chest.

“I did not take the assignment.” He spoke softly, but she could hear an undercurrent of outrage. “I cannot talk about the case, but I made my conditions very clear. Either you were brought fully in and I would have full use of my staff, or I would not take the job.”

Xavier paused. “I was able to persuade him to accept you, but he dug his heels in on Tubs.”

“But Tubs is a valuable asset!” Now she understood why Xavier sounded so angry. The First Minister was an idiot! Who would not want Tubs on their side? He knew everything about the criminal world. He could tip a carriage with one arm. He could bend thick metal bars without breaking a sweat, and despite his massive weight, could keep up with her in a dead-out run.

However, she refrained from stating these attributes, because Xavier didn’t know the details about some of their activities while he’d been recovering from his injury and opium addiction.
Instead, she hugged her beloved and returned her head upon his chest. “Forget the First Minister. With our growing staff, we need to focus on paying cases.”

“What is our case this morning about—and it had better not be another missing cat.”

She nipped him for bringing up the eviscerating feline case she had taken. “You’re never going to let me live that down, are you?”

She pushed off his chest, and this time, he let her go. “Well, according to Ben’s notes, someone thinks they’ve invested in a scam.” She nudged Xavier from the bed and followed him. “This one will require your involvement because you have failed to teach me about investments.”

He dared feign shock and dismay. “Not so well-trained after all, are we?”

Her eyes narrowed but she kept her mouth shut. If she argued, he’d torture her with her ignorance through the entire investigation.