The Missing Partner, Bk 2, The Adventures of Xavier & Vic by Liza O'Connor The Adventures of
Xavier & Vic
Book 2


The Cat Who Wore Too Much

London, England  March 1894
Vic Hamilton takes the reins of the investigation office, while Xavier Thorn disappears on an assignment for the British government. Her caseload is entirely ‘lost and recovery’ cases. In the midst of solving all her client’s problems, she learns that the government has lost Xavier. With the help of the gypsy pirate Jacko, and her driver Davy, Vic rushes against time to rescue everyone.
Most alarming, she befriends and hires a dangerous criminal as an employee of Xavier Thorn’s Private Inquiries—without Xavier’s permission.

When Xavier goes missing it takes the skills of everyone to bring him home alive,
and it still remained touch and go many times. 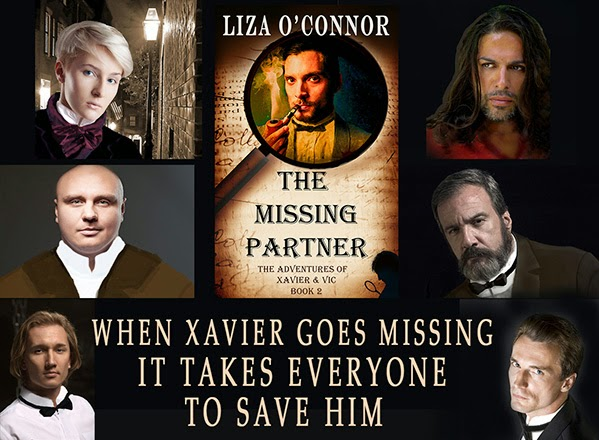 I'd like to introduce the main players. Starting in the top left corner is Victor Hamilton. Oddly all the men on this page, save two, knows she's not the young man she appears to be but they treat her as one all the same.
In the center is our missing partner, Xavier Thorn. He was on a mission for England, attempting to find an elusive and deadly spy.
Right top corner is Jacko B. Goodnow, a wealthy gypsy, pirate and thief extraordinaire.
The grumpy guy below is Davy. He's sick with worry, what with Xavier missing and Vic taking on cases that could get her killed.
Bottom Right corner is Chief Inspector Stone of Scotland Yard. He's tried very hard to keep Vic from knowing Xavier is missing. Xavier has pulled himself out of tight situations before, but Stone knows if Vic dies trying to save him, his friend will never recover.
Bottom Left Corner is the Queen's physician, Dr. Connors. He can't bring back Xavier from the dead, but if they can locate him, even a breath from death, he can work miracles.
And last and largest, is the 400 pound Sonny Tubs, who is reputed to have killed over 100 men, but he has never once been charged with a crime. Following orders, he abducts Vic and takes her to an opium den. Vic is the first person who has ever been nice to him, and he soon regrets taking the young boy and is sick with guilt over the fact.
Each of these men had their part in saving the great Xavier Thorn, but only Vic could find him with her intuitive powers.